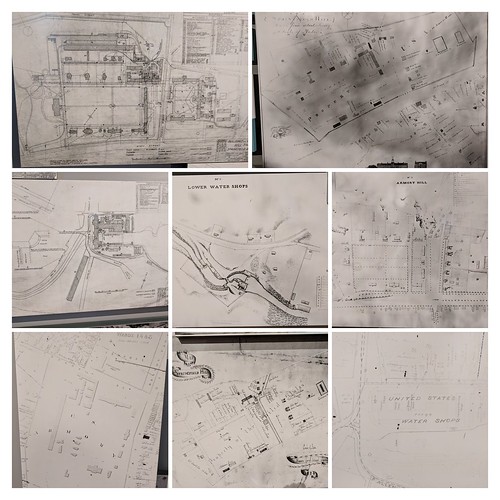 Spending time at the Springfield Armory Historic Site immerses you in many maps. They are all over the place, helping to tell the story of the Armory over the course of time. Our writing project has a strong partnership with the Armory, where we have run professional development for teachers and summer camps for urban middle school students.

The collage above is some of the maps on display, and below is a poem I wrote about maps.

This is for Write Out, an open learning project sponsored by the partnership between the National Writing Project and the National Park Service.

Peace (outside the grid),
Kevin 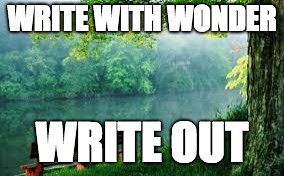 Last night, Bethany hosted an amazing Twitter Chat for WriteOut, in which participants explored a sense of place, the value of maps as a literacy tools, whose stories are not being told and more. This curation does not collect every tweet (there were more than 250 responses to just six questions, if my count is right), but I tried to gather as many as I could that kept the discussion flow going. I apologize if something you tweeted that seemed important to you got left out of the mix.

From a personal stance, I found the thread about a common appreciation for maps to uncover stories to be interesting, and it makes me think about explicit teaching of not just reading maps (valuable) but also the making of maps to tell stories. And there is the notion of what is left off the map, of course, and whose hand is behind the construction of a map (and what they want to highlight and what they want to leave off).

I also think the final question — about whose stories remain hidden in public spaces like National Parks and other historic sites — is critical for teachers to help students grapple with. Using primary sources and other historic materials, we can find those stories, and bring them to the surface in interesting ways. Park spaces are part of a nation’s memory, and we can’t forget the stories of those who have been lost or purposefully marginalized.

The curated chat is here, via Wakelet. 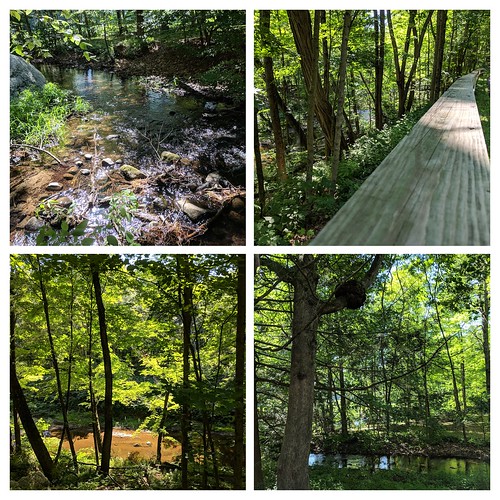 Since yesterday was the World Listening Day and another day in Write Out, I decided to head into the woods to a local protected greenway space to listen to nature.

First, I captured my walk in sound and video.

And then, I stopped in another spot and composed a poem on the fly (no paper) as I put my audio recorder app right near the bubbling stream, so that the water became both the inspiration and the soundtrack.

What are you working on?

Peace (in the listening world),
Kevin 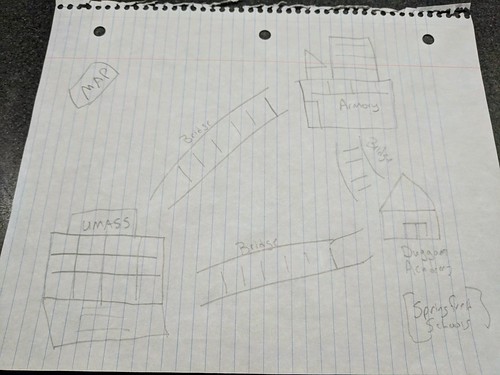 Last night, we gathered together for the first live event for Write Out, an open learning experience that comes from the partnership between the National Writing Project and the National Park Service with a focus on place-based learning and writing.

In the Map with Me hangout, we talked about the partnership between NPS and NWP, the value of making maps as a literacy device for storytelling, why and how place can inform learning and writing, and what we have been up with Write Out.

We also did a mapping activity in the chat, asking folks to map out an organization they are part of. We then shared our maps during the course of the session (mine is above, showing the bridges between our Western Massachusetts Writing Project at the University of Massachusetts with the Springfield Armory Historic Site and the urban school system and the specific social justice middle school we work with.)

You can find more information about Write Out at the website.

PS — there is a WriteOut Twitter Chat tomorrow (Thurs) at 7 p.m. est, using the #writeout hashtag. If you have never done a chat, we have a tutorial with helpful tips and information.

One of the hopes for Write Out — an open learning experience now underway by National Writing Project and the National Park Service — is to use mapping as a way to surface stories, and make connections. I’ve worked with the Springfield Armory now for a few years through our Western Massachusetts Writing Project. I’ve led professional development for teachers and facilitated summer camps for inner city youths at the Armory.

What often surfaces during our dives into primary sources and themes of social justice is the immigrant worker experience, and how many of the workers during the heyday of the Armory arrived in Springfield, Massachusetts, from other parts of the world, and that immigration wave changed the Pioneer Valley of Massachusetts forever.

The map I created, using Google’s My Maps, is designed to visually show the country of origin of a number of Springfield Armory workers, complete with a short biography, and connections from their home countries to the Armory itself. Using primary source material, I found short bios and photographs of seventeen workers and I asked some of the other teachers and rangers involved with me at the Springfield Armory to record readings of the text.

Each pin of each immigrant worker has an image and a voice narration as a video.

What comes to visibility are the stories of these workers, with snippets of their home countries, their families here, the work they did at the Armory, and other odd facts. It’s not much but it’s enough to give a flavor of the immigrant experience, and the map makes those stories more visible than ever.

Here are all the videos, gathered together into one video:

How can maps help tell your stories? (There is a helpful guide to various maps at Write Out, if you need inspiration)

We have a map theme going for the Write Out project, an open learning invitation now underway from the National Writing Project and the National Park Service designed to support place-based writing. Teachers, park rangers and writers are invited to play with media and writing, and the theme this week is Mapping Possibilities.

If you are not sure how to add a pin of your location (and hopefully a video or an image or some text, too) to the Write Out GeoLocate Yourself Map, we’ve created a tutorial to help with step-by-step instructions. You do need a Google account (unfortunately) and Chrome browser seems to work the best. And you need to be at the map in Google (you can’t add a pin here, in this embeddable version, which is a read-only version)

You also can read the first newsletter to get a sense of some of the many different mapping-style activities you might want to consider with Write Out. There are also a ton of resources around place-based learning and around the use of mapping to tell stories in many ways.

Today (July 15) is the official launch day of the Write Out project, an open learning partnership between the National Writing Project and the National Park Service to connect educators with NPS and other park spaces for project-based learning opportunities.

You can read the first newsletter of the two-week project here. You’ll see a variety of different activities, depending on your time frame, and all built around the concept of mapping out the world, your connections and potential partnership possibilities. We’ll also be hosting a Map with Me Google Hangout on Tuesday and a Twitter Chat on Thursday (both take place at 7 p.m. eastern standard time).

Read the first Write Out Newsletter

As with many Connected Learning/Open Learning projects, you engage when you can, and how it makes sense for you.

It’s always fine to follow your own path or to wander into the wild.

Like you, perhaps, the images and sounds of children being taken away and separated by the United States government under this heartless president has struck a nerve of humanity in me. As a writer, I often try to deal with those things through words, and as a songwriting, sometimes through music.

This song tells the story of two fathers — one who is coming to the US to escape the violence of home and one who is taking to the streets in protest over the treatment of such immigrant families.

We ran out of time in the school year to do the kind of thorough reflection that my students really should do at the end of the year in my ELA class. Some got to the digital writing portfolio project and did a fine job, while others were finishing up another project, and the clock ran out on us. Sigh.

But this list that I created as guide is a nice overview of the entire school year, seen through the lens of writing and technology. The list itself gave my students some perspective on what we accomplished through the 2017-18 school year.

Looking at it this way, I can see (and my students could remember) the wide variety of projects and range of writing we accomplished in the school year. Jaron Lanier is a well-known name in Silicon Valley, and I’ve enjoyed some of his books in the past. His latest — Ten Arguments for Deleting Your Social Media Accounts Right Now — is not as strong as some of his other books, and he gets too cute with his explanatory acronyms at times, but the book has merit for informed reading.

I won’t go through all his arguments, but it boils down to this observation from a technology evangelist from inside the technology industry (with a decidedly humanistic approach to technology):

Companies like Facebook and Google that have created algorithms that sell user personal data to third party companies (See Cambridge Analytica controversy) have created a toxic atmosphere that feeds on negativity because the powerful emotions of negativity — anger, sadness, frustration, isolation — fuels interaction, and interaction with the technology leads to profit for companies.

The only way companies will get the message to change their course is for users to stop using the technology. In fact, Lanier argues that this current business model is unsustainable in the long run, and that if Facebook and Google don’t consider other models of profit, they will be doomed. Until then, though, the degradation of experience will continue.

Unless you make a choice to stop.

Lanier argues that we make that choice, and quit. Not the Internet itself. Not the connections we make. But quit the social networking systems that don’t value users as people, and whose algorithms (now set in motion and running rather autonomously) nurture dissent and friction. He cites examples from Black Lives Matter to the revolution in the Middle East and more, as examples of how the use of social media begins positively and then quickly turns negative when the algorithms amplify negativity for engagement.

He also acknowledges that everyone’s situation is different, and quitting for one person might be easier than for another. His final message is, be informed and make an informed choice.

Interestingly, Lanier is not entirely pessimistic. He believes there is still time to change things for the better. He offers up some different solutions, including the idea of users paying a small fee to use social networks, but also, the idea of social networks paying users for any content that engages people on the same network. So, you would pay (creating a new financial system for companies) and they would pay you to write and create interesting content.

Would it work? I don’t know.

Will people really quit in numbers enough to effect change? I don’t know.

Is the current system sustainable? I don’t know but I don’t think so.