There’s a moment towards the end of the fantastic new documentary about Fred Rogers — Won’t You Be My Neighbor? — where a gentleman, Junlei Li, who works at the Fred Rogers Center looks directly at the camera, and says something along the lines of: It’s not what Mr. Rogers would do. That’s not the question we need to be asking. It’s what are you going to do?

The comment comes as the film wrestles with the current climate of incivility, of unkindness, of using media for personal gains by finding and exploiting the faults in others. Fred Rogers saw the world was changing in the years before his death, and he was saddened by it.

Li’s point is that we can’t look to media figures, just as we can’t look to sports icons, to change the world for the better. We have to look to ourselves, and how we treat each other, how we tap into kindness and caring and understanding. It’s heart-breaking that such talk sounds old-fashioned in the current age of a president who acts like a thug on the wires, but it’s true.

My wife and I — and pleasantly surprising us both, our 18-year-old son joined us — got out of the scorching heat yesterday to watch the movie in the theater, and my wife and I were nearly crying at times (not sure about the kid). I didn’t watch Mr. Rogers’ Neighborhood as a kid, but I know of him, of course, and of his work. To see his journey and his mission, and his impact on kids through the medium of television, is powerful viewing.

There’s another moment in the movie that also stuck with me. Right at the end, all of the people who are being interviewed as given a minute to remember someone who impacted their life in the positive. The camera stays with them, holding their gaze, quietly, as they think and remember, and even cry at the memory.

Let’s remember those people who helped us, and be the people who others might remember, too.

Peace (in the heart),
Kevin

I’ve loved writing for Middleweb, a site dedicated to teaching the middle grades. After five years, I have decided to pull the plug on my monthly column (which began as a bimonthly column) called Working Draft. It’s been fun to write, and inspiring to think about topics, and reflective practice from teaching perspectives, and I have nothing but praise for editors John and Susan.

I also linked in the final column to a handful of pieces that I think still resonate for me.

I am also pleased that my National Writing Project friend and collaborator over the years, Jeremy Hyler, will soon be launching his own ELA column at Middleweb, filling in the gap I leave behind. Jeremy starts writing sometime this month. 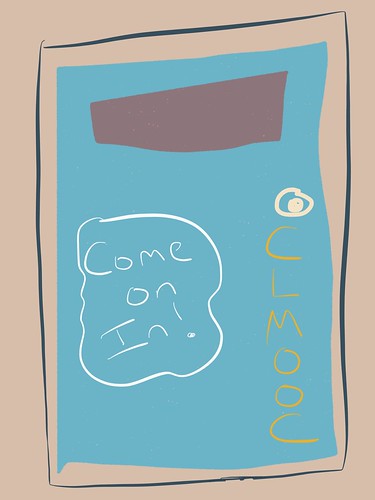 It’s CLMOOC season! That means invitations and connections via Connected Learning MOOC, and this July, every day, there is an open invitation to doodle on a theme, all related to open spaces and mapping. You can doodle every day, or just join in when the muse strikes you.

Learn more about the doodle effort, an online poetry exchange project, and more at the CLMOOC website.

You can also get the daily prompts via email or RSS feed through The Daily Connect, where we will be posting each day’s prompt as a new post.

I’m not much of an artist, but I still love to doodle, particularly when others are doodling, too. Today’s theme is Enter/Welcome.

Peace (in pens and crayons),
Kevin