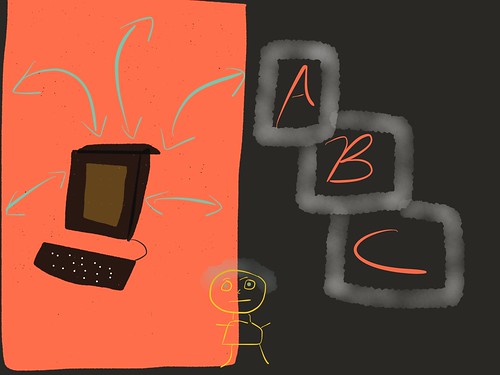 I put out a call to some friends yesterday to visualize their digital writing, but without words. I was curious to what folks might do. Mine is above. As Terry, and then Anna, and then Sheri, shared their ideas, I started to think of how I might interpret their designs through poem and song. This part of an extended conversation about writing digitally (and you are invited). We are using the hashtag #modigiwri (more digital writing) on Twitter.

I first used Sheri, Anna and Terry’s images for poems, adding words as a layer of interpretation, and then moved into capturing what I was seeing in their art into short song loops. It’s a musical interpretation of a visual idea about a writing concept.

Which was an intriguing process, of looking deep into the images and trying to figure out, how do you capture an idea in music? I hope these three friends find my attempt interesting.

If you share your image, I’ll do my best to do the same for you.

Peace (in sounds of static),
Kevin