Terry did a fine job of laying out the process for making a small bit of media art, using words and image and gif and video, and then adding another layer by pulling it all into Popcorn Maker (now hosted at the Internet Archives) for a soundtrack.

I wondered how I might take what Terry created, and using his idea of adjacent thinking, remix his piece with Popcorn Maker into something slightly bent, with a poem and new music.

Remixing is easy with Popcorn, even if the platform gets funky and wonky at times. Just click on the remix button (two buttons to the right of the volume knob on the lower corner of the project page). 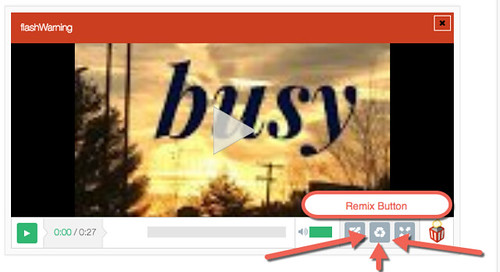 That button re-opens the entire project in a new space, with all of the original media intact. Now you can remix with new media or re-arrange the existing pieces, or add text and images on top. You don’t need to be logged in to remix but you do need to have an account with Internet Archives to save it and share the remix (and supporting the Internet Archives is good idea, anyway, I think).

Again, Popcorn Maker is a bit wonky at times. A little laggy. You need to wrestle with it. Sometimes it does funny things. But it works, and so I spent some time adding a new poem outside of his project, changing the soundtrack and adding bits of this and that. The idea was to be inspired by Terry’s work and bend it a bit through interpretation.

Here’s what I came up with — this is the link, since sometimes Popcorn doesn’t play nice with embeds here, particularly with the music track, for some reason, and sometimes, the youtube video playback

And you know what? You can remix my piece, too, adding another layer up or down or maybe sideways .. use that little remix button. It’s there for a reason. Wouldn’t it be cool to have a series of these remixes, all riffing off another? What would that look like? Sound like? Would there be common echoes across the pieces?

Let me help you get started (I think this will work and you won’t even need a login to play with the remix — does not really work on mobile devices because it is still flash-based, which is why Mozilla abandoned Popcorn Maker):