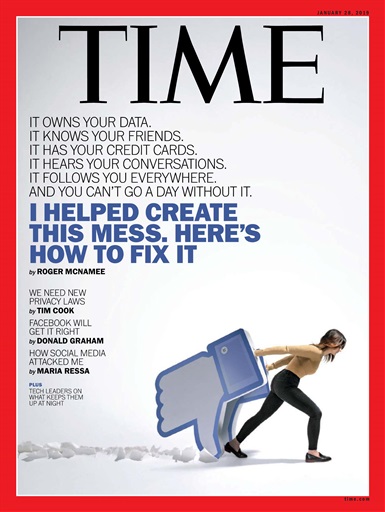 I don’t know if others get Time magazine (do people still get magazines?) but I get a free copy because I use the Time for Kids version with my students. Last week’s issue still resonates with me, particularly as Networked Narratives opens with a theme of critical lens on technology and society.

The cover story is by Roger McNamee, who was an early investor in Facebook and whose presence during the early years helped shape what Facebook was to become. He says he was often in the room with Zuckberg during the formative years, and he is still an investor and shareholder of Facebook.

In his very critical piece that pulls few punches, McNamee chastises in a very public way both Mark Zuckerberg and Sheryl Sandberg for losing their way, for abusing their power with the social media platform, for ignoring their privileged position to enact change, and for being so driven by profit and algorithms that users’ trust and data have been abused, used, sold and discarded with little consideration of the human impact on society.

He also lays out some major topics and areas of concern where Facebook may be a threat to a civil and civic society:

McNamee is blunt and to the point, calling Facebook to the carpet for losing its way (Me: I don’t think they ever had a way forward with true public benefit, despite the storytelling the company does, and I have never bought Zuckerberg’s platitudes about connecting the world to make it a better place. All signs point to profit, right from the start.)

Whether McNamee’s piece (which is adapted from a book he has coming out) makes a difference is unknown. He is still an investor and an insider, so maybe his influence will influence others, and that will influence Zuckerberg and Sandberg. I suspect not.

Other pieces in this edition of Time are also interesting, from Tim Cook calling for more regulation over data privacy to Filipino journalist/activitist Maria Ressa explaining how Facebook allowed others to attack her and her alternative news organization to Eli Pariser calling for restoring a sense of dignity in the technology world through better design.