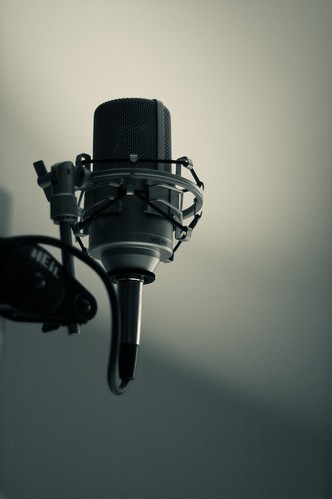 The mic hears everything flickr photo by kreg.steppe shared under a Creative Commons (BY-SA) license

“We’re looking at the relationship between fake and real.” — NPR Host Alix Spiegel

The National Public Radio’s Invisibilia program turned its focus on the idea of our Invisible Selves, the way our online social media-infused identities are often in conflict with our offline identities. This radio program — Point, Shoot — is long, as a deep dive into an important issue, but it is worth the listen.

(Note: there is some profanity and references to violence)

Here is the transcript

Radio reporter Hanna Rosin centers, through her exploration of one person’s tragic story, on a boy named Brandon whose posting on social media led to tragic results in his small city, and she notes this premise:

Later, after her exploration of how Brandon sought to represent himself on social media with guns and hints of violence — in contrast to the boy he was in real life — only to killed for his social media posting, which were seen as taunts to those who killed him, Rosen writes:

“We all do some version of this. Curate an aspirational online self. Most of us have one. And we outfit it with different props and costumes – like heirloom tomatoes, the dog we just rescued, a protest poster, a funny casual quip we spent 10 minutes crafting. This person has a relationship to us. But it is not us. “

In her discussions with family, and friends, the disconnect between who they knew — Brandon, the boy — with the identity he curated online — Brandon, the gangster — caused confusion that such posts would lead to his death.

… the problem is we’ve moved into a phase where the image – the version of Brandon constructed from a Facebook post can very easily eclipse the real. And we are just stubbornly failing to reckon with the consequences of that. It doesn’t matter who Brandon really was.

The confusion spread like a virus to Brandon’s friends and his enemies and the police and the courts until an entirely new code governed every part of the city, a code built on a giant misunderstanding about image and reality and how quickly the boundary between them is shifting.

A story like Brandon’s reminds us of how we need to be talking to all of our kids about identity and social media, and the power and consequences of words and images that get shared, sometimes in a fast and furious way. You can post something you think is cool, only to see it careen out of your control, and sometimes, that has tragic results.

Let’s help our kids be careful out there.