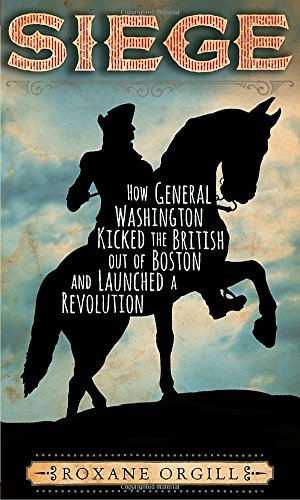 It’s possible this book wins the award for longest title in my reading activities this year. Siege (How General Washington Kicked the British Out of Boston and Launched a Revolution) by Roxanne Orgill is a free verse narrative of … well … what the title tells us — the historical time in Boston just before the full onslaught of the American Revolution unfolded and tensions were running high in Boston.

Siege spins the story through a multitude of voices — and this use of voice in free verse is its most effective trait. While I do enjoy free verse books, the poems where never quite captured my fancy, for some reason. I was intrigued, though, by how the poems represented both the powerful (on both sides of the military standoff) and the common people caught in the middle of escalating violence.

Washington is the reluctant general, in some ways (as history has shown) and he railed against the restraints he was given as he sought to build up a military force to face the British. Food was scarce as disease was not. Gunpowder, the key to winning any battle, was in low supply.

The most intriguing storyline here, for me, was Washington begging his former secretary — Joseph Reed — who had returned to Philadelphia after his stint with Washington ended, only to be on the receiving end of many letters from Washington himself, giving full account of the chaos of turning regular rebels into an army, and calling on Reed to leave his family and return to Boston. There is something in the humanity of the two men that comes alive in the poems in the book.

Siege would be a solid entry into a middle or high school shelf, and of particular interest to those history geeks who love to learn more of the minute and human aspects of the time before the start of the American Revolution.

Peace (on the hill),
Kevin