“You are invited to donate a single word.”

This is how it begins. An invitation to write. It knows my weakness.

“Your word will be instantly incorporated into an original two line poem generated by an algorithm trained on over 20 million words of 19th century poetry.”

I arrive at this Google experiment (privacy hackles, dutifully raised) in poetry via Terry entitled Poem Portraits, and so I dig in, and learn that it is a collaborative poetry that is “ever evolving” as people add words and Google’s AI system culls through a myriad of texts it has in its data banks. They call it “An experiment at the boundaries of AI and human collaboration.”

As you add a word (my donated word: Harmonize), it uses your contribution to generate new lines of text, adding to an ever-expanding ongoing poem collaboration between human and machine. The AI asks for a selfie (but you don’t need to do one to add a word), and this is where I paused but then decided to do it and go further. 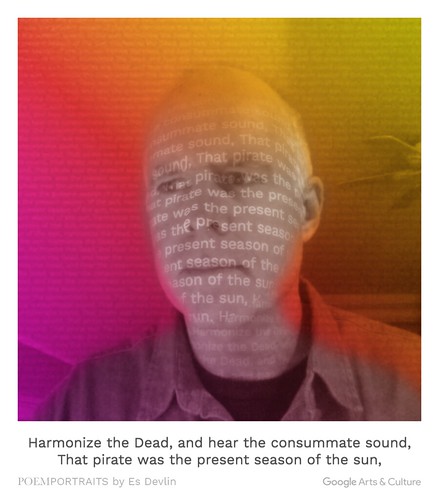 The result is your word, and the words of your part of the poem, projected and mapped on your face, so that you become part of the poem. (Who knows where all those selfies go .. I suspect it becomes part of Google’s facial recognition data base. I’m sure I am already in there, but I would not likely bring students to this kind of poetry experiment).

I wanted to do more with the photo that gets generated. When you get to this step of your poem on your face, you can also read the larger, collaborative, AI-generated (with your word now added) unfolding on the page (You can access the scrolling poem without participating if you stop before adding a word).

So, I relocated my poem-selfie into the mobile app Fused, and began to layer in some visual static, working to deliberatively create a sort of fuzzy overlay of the selfie poem, as a means to represent some discomfort with how I willingly gave my image to Google.

Then, I wrote a short piece of music in Thumbjam, keeping the idea of my word — Harmonize — in mind, and working to layer three different musical sounds that work in harmony, and a bit of disharmony, too.

Finally, I took all of those pieces into iMovie and wove the media together, with a vocal reading of the text that filters across my face as part of my stanza of the poem.

The result of my playing is the video above … which starts as AI machine but ends with me, the pesky human, taking control of the image and poem again. (Or so I imagine).

PS — this is how Terry played with his results, calling it his “ghost”