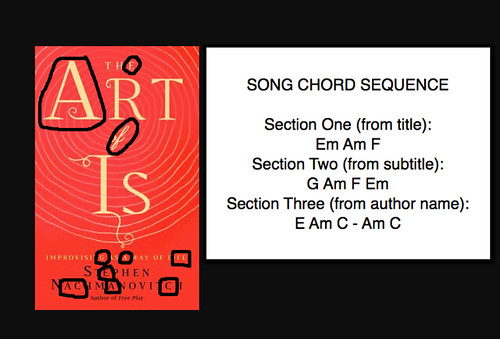 There’s a whole section in the book some of us are reading together in NowComment, with annotation conversations unfolding, where writer Stephen Nachmanovitch (in The Art of Is) explores the division of the world into nouns and verbs, emphasizing the forward motion of doing things (verbs) as opposed to merely observing things by breaking them down into parts (nouns). He uses music as his example, noting that the word “musicking” would be a way to encompass the act of making music, often with others, and being creative.

I wondered how I could use the text itself for a way to inspire a new piece of music, to put Nachmanovitch’s idea into motion. I wanted to be musicking within the words of the text. After mulling it over, I decided to use the book title — The Art of Is — and the book subtitle — Improving as a Way of Life — and the author’s name — Stephen Nachmanovitch — as a means to gather chords.

The image above explains how I went about making my song — I only sought existing chords as I read (so, as Wendy asked elsewhere, I did not convert other letters without chords into something else … I just ignored them) and created three distinct sections: title, subtitle, name. I did keep the sequence of chords intact, however, so that in whatever order they were, that’s what I had to work with. I took the liberty of adding minor chords where it would make sense of the structure and sound.

I then went into the Garageband app on my iPad, and began to compose over the course of the afternoon, improvising and experimenting as I went about it.

First, I created drum tracks and worked with the bass, adding some guitar riffs, and then finally, layering in some of the world music instruments. I was slowly adding pieces, and then removing them at the end, to create a sound version of our annotation efforts (OK, this may be a leap, but not for me). For the most part, I think the song works, unfolding itself against the rhythm beat, and certainly, it is a piece of distinct music connected to and inspired by the book (if only in my mind).

You are welcome to remix or download or do whatever you want with the track from Soundcloud.