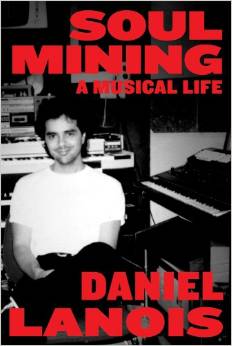 Autobiographies of musicians intrigue me because they pull back a layer on something behind the engineered musical tracks we hear that first caught our attention. Consider Daniel Lanois’ book – Soul Mining (A Musical Life). You may either not know or only be vaguely aware of Lanois, but his impact on the musical landscape for much of the 1980s and 90s is undeniable.

Mostly, he did this as a producer/engineer of Peter Gabriel (So), U2 (Joshua Tree), Emmylou Harris (Wrecking Ball), Bob Dylan (Time Out of Mind), Chris Whitely (Living with the Law) and many others, including his own French Canadian-influenced solo albums (Acadie).

His connection to Brian Eno and the aesthetic of “space” in music is something still very apparent today. I was just listening to the incredible new album by The National and found myself as listener in the gaps of words and sound, and knew that this an enduring influence on the part of what Lanois (he is not involved in The National, as far as I know) and others brought to the table with their sound explorations.

This autobiography brings forth insights into how Lanois began to hear and experiment with sound — he had a lot of freedom as a kid, which he attributes to forced imagination and making creative outlets for amusement, and his mother essentially let him and his older brother turn part of the house into a recording studio when he was at a young age (one of his first recordings he did was for Rick James, which is strange to think about). He also is very organized and detailed, making intricate notes on everything in the studio as a producer, and some of his journal pages shared here in the book are rich with thinking and complexity.

“Keeping track of arrangements and ideas on paper has always been part of my work process. Remembering is just another word for choosing. The world turns the same way for everybody but different people choose to see different things.” — from Soul Mining (A Musical Life), by Daniel Lanois, page 13

I was struck by his curiosity. He’d pack up and move someplace in a minute if the instinct struck him. One time, he moved to a remote location in Mexico. Another time, he bought an abandoned theater in California, and created a space for artists to record and perform. Most of all, as a producer and engineer, Lanois always seemed deeply in tune with the artists he is trying to capture — combining his vision for music production with the depth of the musicians and songwriters he works with.

Give Lanois a listen, and pay attention to the space in his songs and the way pieces are layered together to create a rich cushion for voice and words. His artistry behind the board is undeniable. Soul Mining brings that vision to the forefront.

Peace (in sound and design),
Kevin

PS — I was sent this book rather unexpectedly by my musical friend, John, and I will be passing it along to another musical friend.