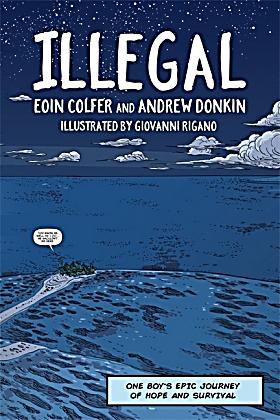 I’m not sure I have read quite so powerful a graphic novel in some time as I did with Illegal, by Eoin Colfer, Andrew Donkin and illustrator Giovanni Rigano. Aimed at upper elementary and middle school readers (and maybe high school), this heart-felt graphic novel follows Ebo, a young boy refugee on the run from Ghana, Africa, to Europe, where he hopes to find his sister and start a new life.

Such is the story of so many people these days, and Ebo’s journey is both harrowing and hopeful. Along with his older brother, Kwame, Ebo is determined to survive his trek across the Sahara Desert and then the balloon boat ride to Europe. It’s a trip of travails and tragedy, one made visual and visceral by the use of the artwork in this story. It will pull you in and tug at your heart, particularly one specific scene on the ocean just before a rescue. It will make you wonder about the headlines and stories you read about those who don’t survive the journey, and those few that do.

It will make you consider, too, the people in the so-called Migrant Caravans making their way north from Central America to the United States border, and the desperate need for a better life, away from violence and poverty, that propels such a journey. Illegal will remind you, as the authors do in their note to the reader, that “…every person is a human being.”

An additional small black-and-white graphic interpretation of an real interview with a woman who made a similar journey as the fictional Ebo is a powerful use of the graphic novel genre, bringing us into the face and story of Helen, who left Eritrea for Europe and had her own journey of desperation. This small piece helps to ground the larger story in the real world, and makes you weep for those who face such danger just to find a safer place to live, with a future, for themselves and their families.