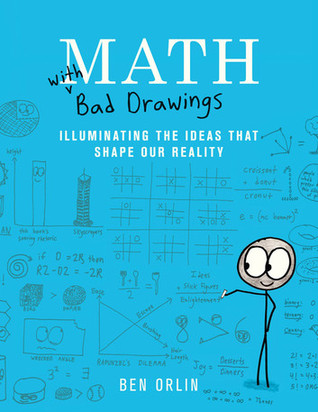 I admit it upfront: it was the reference to stick figure drawings more than the math that got me interested in this book when I first saw the cover. But, truth be told, it was the math ideas and concepts, and Ben Orlin’s wonderful sense of humor and explanations of those ideas, that kept me reading on to the end.

Math with Bad Drawings (Illuminating the Ideas that Shape Our Reality) covers a lot of mathematical ground, and some of it went beyond me but most of it I found really intriguing and I learned a lot from Orlin (a math teacher, turned stick figure artist, who — it turns out — lives in the same city as I do). You can even follow Orlin’s blog, where he posts his comics and ideas.

What I enjoyed about the book — other than Orlin’s simple but funny drawings — was the expanded notion of math as a guiding principle and underlying force in our world, and the ways in which Orlin surfaces those ideas. Yes, we are covering probability, statistical analysis, number theory, logic, and even the weird underlying math of the Electoral College, and more, but Orlin — who knows his audience is likely neither math teachers nor math fanatics — uses clear explanations, connecting math to the real world as much as possible, and when all else fails, letting us know when we’re moving into geeky esoteric mathematical principles. At least, the reader is forewarned.

In an early chapter, Orlin introduces a strategy game called Ultimate Tic Tac Toe, which I brought into my sixth grade classroom as a challenge activity, and many of my students really enjoyed the game, which expands the game board and tweaks the rules to make an otherwise predictable game much more challenging. (You can even play a version of it online — against a computer or with a friend. Neat.)

Math with Bad Drawings is a recommended read for anyone interested in learning math beyond the textbook, even writers and teachers of young writers like me, and you’ll come out the other side of the text with an expanded knowledge of theory and practice, and a few ideas for making stick people drawings. So, you know, win win win.

What are the odds of that?