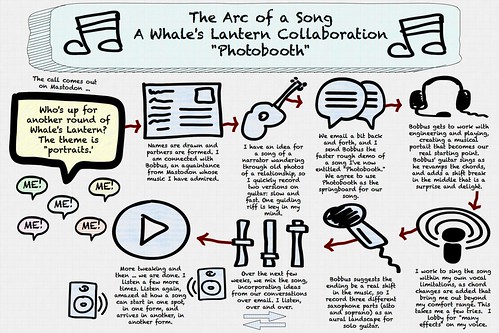 The fourth iteration of A Whale’s Lantern — a musical collaboration on a theme with random partners, mostly from the Mastodon social networking space — has just been released this weekend, and a song I co-wrote/co-produced with my partner — Bobbo — is the track called Photobooth. The theme was “portraits.”

I wrote about the construction of the Photobooth song from idea to final track here.  But now you can listen, too, to what we ended up making together:

And the entire album of music is on Bandcamp — along with all the other three Whale’s Lantern adventures, which I also have tracks from partnerships — for free, although you are invited to pay a little if you download the tracks.