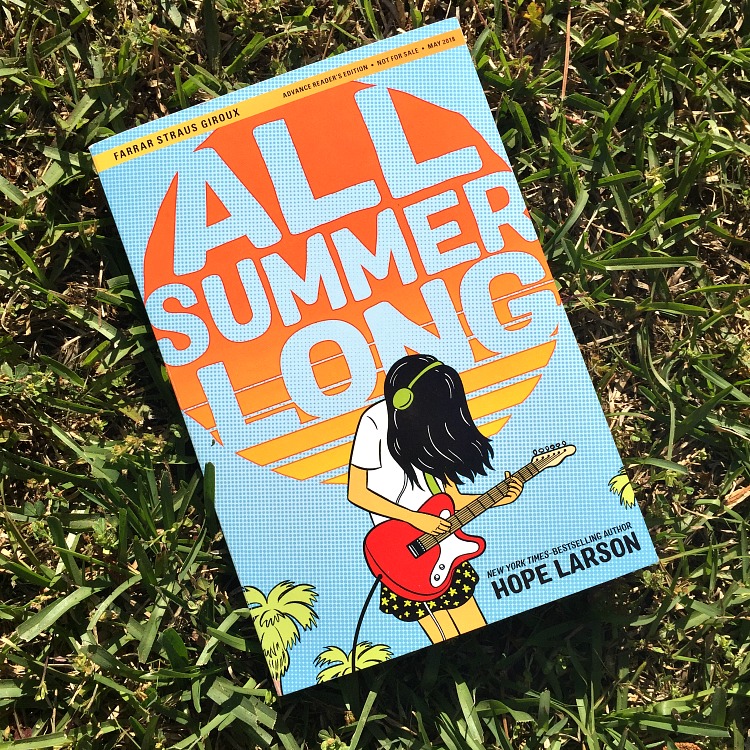 Any book dedicated to “the weirdos and the part-time punks” and features a guitar-playing kid on the cover has my attention.

Hope Larson’s All Summer Long lives up to the dedication, focusing in on 13-year-old Bina, whose friendships are changing as summer vacation begins and who must navigate those changes while staying true to herself. In graphic novel format, the story unfolds over the course of the entire summer. The graphic story format works best during the boring moments, when Bina is alone, listening or playing music. The art captures the quiet moments in ways a traditional novel might not be able to.

Punk rock helps the summer move along, if rather slowly for her, and Bina is never far from either her headphones nor her guitar. Often, both. Her best friend and neighbor, Austin, has been acting strangely this summer, putting some distance between their friendship as he, too, navigates the world of being a 13 year old boy becoming influenced by peers and attracted to girls, but not Bina (maybe), and needing some space from their year-long close friendship.

When Austin goes away to soccer camp, Bina connects with Austin’s older sister, in a complicated friendship, and home life for Bina is unsettled, too, as an older brother is about to adopt a baby. The story told through the long weeks of the summer show Bina struggling to stay true to her passions even as adolescence and teen-hood begin to put pressures on her to conform.

Luckily, she’s confident enough in herself to resist the conformity and to be herself, and visiting a show to see her newest favorite unsigned band, where the lead player tells Bina to drop everything and just start a band, is the advice she needed. The book ends with Austin and Bina finding a friendship balance, laughing together. As the new school year begins, Bina begins to put up posters, seeking other girls to rock out with.

Think Bikini Kill or Sleater Kinney or L7. That’s what I heard in my head as Bina played her guitar.

This graphic novel is geared towards upper elementary, middle and high school readers. And, of course, to all of us weirdos out here. Maybe that’s you, too.