Our AI handpicked sentences for you! Does the story flow well? — this was the message I received on Lumen5 after I put a poem into motion in the digital story platform

You decide. I said, yes, to let the experiment happen. This is the result:

The poem, as original text:

Replace me, writer,
with a machine,
algorithm, software,
and our fields
may go fallow

the genetically
modified organism
of words may be
planted, watered
and sown

Lumen5 chose images that I probably would not have, such as a typewriter instead of a computer, and the human body model is just kinda strange, I think, but I see it probably hooked its search on the word ‘genetic’. It also bundled words together that I might not have (which is the first message I had received, about AI picking my sentences). There’s something further off about the digital version but I can’t quite place my finger on it. Maybe it’s just me, the writer, losing my agency. Perhaps a casual viewer with no back-story would not even blink at the digital rendering of words.

Somewhat related (perhaps only in my head), a DS 106 Daily Create that I had submitted weeks ago went live yesterday, asking folks to try out the machine-learning Talk to Transformer site. (I explored the platform a bit here and then extended my work here) You type a phrase and the algorithm continues it, tapping into a vast and growing database of texts.

Yesterday, in Talk to Transformer, I typed the first line: This machine writes poems …

And this is what it kicked out and the response is rather intriguing: 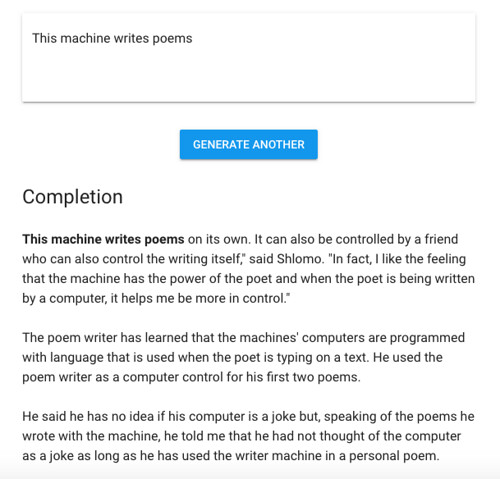 What’s it all mean? I don’t rightly know. But it is increasingly intriguing to wrestle on the screen with algorithms and writing, to suss out the elements that make us human and what makes us programmers of words. Or not.

What is writing anymore, anyway?