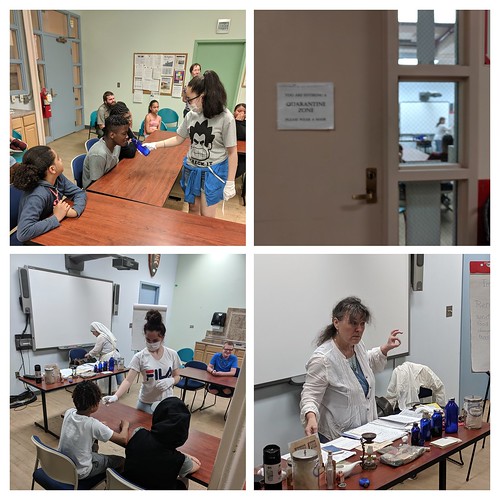 Of all the senses that educators tap to help students learn something new, the sense of smell is often the one we use the least, right? Yet, scents provide deep learning experiences. Memories connected to smells are powerful, lingering long after the event. We saw that idea in action yesterday at our Springfield Armory summer camp, where a visitor who does historical demonstrations – Reba Jean — arrived with vials and bottles of smelly substances, and a quarantine sign on the door.

The theme of the day at our camp was immigration, and Reba Jean made distinct connections between migration and immigration (and emigration) and the Influenza outbreak of 1918, when millions and millions of people around the world died from the epidemic, also known as the Spanish Flu. Unless you were in Russia, then it was called the German Flu.

“Someone always wants to blame the other, the ones they don’t know or don’t like or don’t understand,” Reba Jean, who is a historical interpreter at another local history museum, explained, tying the discussion to something we had spent the morning on — the reasons behind immigration patterns and how newcomers are met at borders by those already there.

Yes, this was history — the Springfield Armory itself was a magnet for many immigrants across the globe during the World Wars because it needed workers and because potential workers wanted to help soldiers fight the wars — tied up with modern days news cycles of our southern border.

In the demonstration, Reba Jean had campers sniffing a variety of scents before telling them what it was they were smelling. All of the scents representing ways that people tried to ward off Influenza in the 1918 outbreak, which began at a military base in America and spread to the world when those soldiers were shipped off to war fronts.

The looks on the faces of our campers — all middle and high school students from a social justice school in Springfield — was priceless as they closed their eyes to sniff out history in little cups. Reba Jean did a brilliant job of connecting the sensory experience to the topic of immigration, too.

Afterwards, I realized how little I have ever used the sense of smell in my own classroom, but how powerful it was. I could see it on the faces of campers, and afterwards, in reflection, they explained how they found the activity memorable, connecting what they discovered through their noses with historical information Reba Jean was sharing.

Peace (on the winds),
Kevin