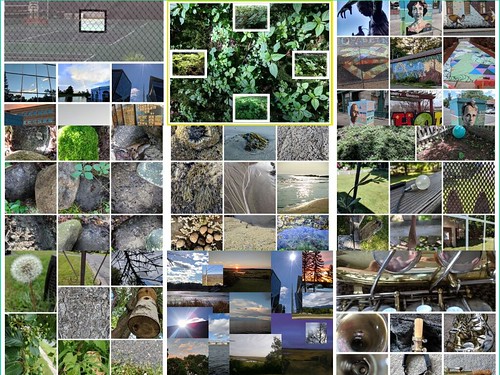 I’ve spent the month of July, letting my eye wander to the world for the CLMOOC Feldgang Variations — an invitation to explore the world and ideas closer, with detail. (See the prompts we released via CLMOOC at the Daily Connector). The Feldgang concept is an exploration of the previously known world, but seen closer, deeper, with attention to what is often missed.

Mostly, I’ve been creating image-themed collages — of the front and back yard of my home, of the sky, of my saxophone, of the beach, etc. —  with an eye to paying closer attention to the world I am walking through. I also had this notion in the back of my mind that I wanted to do something with all of the collages, but what?

I decided to go meta — to make a collage, each with multiple images, of the nine collages that I had created (above) and then to go one step further and make art from the collage collection by filtering nine copies of the master collage, and then pulling those into yet another collage. Layer upon layer upon layer.

The result? An interesting weaving of themes and images, which get lost in the final art remix but I found that I was OK with that — something new surfaces there, I think, a fuzzy, beautiful world of worlds, all connected to the original impulse to lean in a little closer and see things with more detail. The art collage project reverses the telescope of the Feldgang moments, giving me yet another lens to think about. 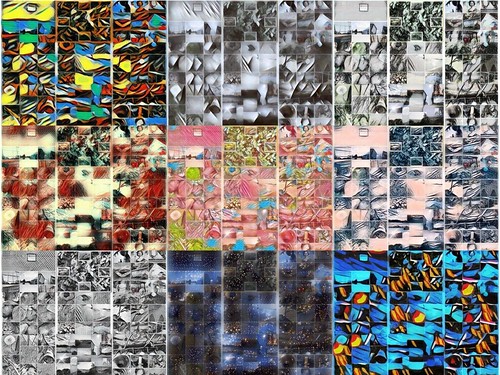 What did you find in your explorations?