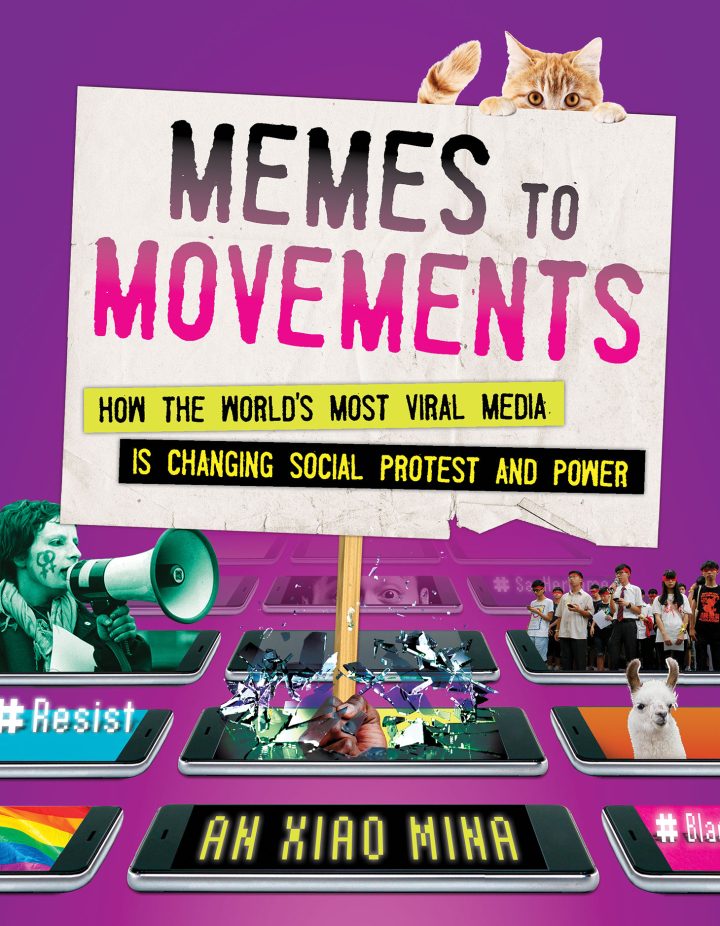 I was expecting an academic examination of social media and memes with this book — first mentioned by my friend, Christina, at a National Writing Project retreat during a meme writing activity– and it was that … and so much more, too. Memes to Movements (How the World’s Most Viral Media Is Changing Social Protest and Power) by An Xiao Mina shines a light and lens on the ways that image and words, and messages, being shared over vast social networking spaces are impacting politics and more.

First, what is a meme? “Memes are pieces of content that travel from person to person and change along the way …” according to Amanda Brennan, a meme librarian, and Mina’s own definition runs parallel to Brennan’s idea. Mina makes the case, too, that memes are not just digital pieces but can have a life outside of technology.

Mina, in her book, also repeats an important assertion time and again that memes, by themselves, are not forcing cultural and social change, but that the combination of image, message, remix and virality are echoing and enhancing changes already afoot, through amplification of messaging.

Mina examines Black Lives Matter (and its oppositional movements, such as Blue Lives Matter) and the pink pussy hats (as physical memes) of the Women’s March in the United States, the Arab Spring, the Umbrella Movement in Hong Kong (now suddenly back in the news), the subversive use of memes in China, and the ways the Chinese government is countering such attempts, and more, all with a close look at how memes (digital and physical) are created, spread, have impact, and — for some — have long-lasting effects.

She also explores the popular conceptions of cats as the source for memes on social networking spaces, balancing a historical approach to how memes — remixable, shareable, riffable media — tap into something rich in people’s sense of storytelling. The intersections between art, culture and politics, along with an easy way to share, have made memes a powerful messaging platform, even if memes can also be untrustworthy (see Know Your Meme for where memes originally spring from)

Some of the more fascinating sections in this book involve China (where Mina has worked and done advocacy), in which activists often use memes to get around censorship through imagery and symbolism (the llama, or grass mud horse, has political meaning, for example) and support for those imprisoned by the government.

Just as you start to think, memes might be another tool for political change, Mina shifts her focus, showing governments — autocratic and otherwise — have started to reverse course on trying to block memes and now floods the networks with its own social media, in an effort to overwhelm users and create doubt about truth and veracity in the minds of users.

The writing here in this book is lively, and researched, and global on scale. If you have interest in social media and literacy, and the way viral messaging seems to be overwhelming the way people share news, jokes and information, then this book is well worth your time.