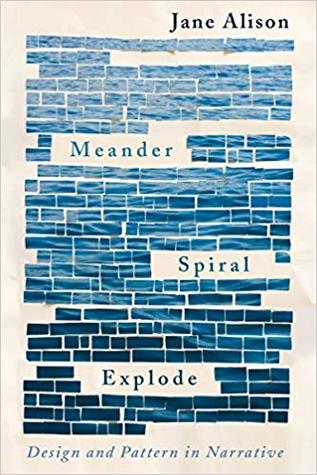 I have not read Jane Alison’s work before, but her latest — Meander Spiral Explode (Design and Pattern In Narrative) — has me curious what kind of experimentation she might do in her own fiction. Here, she leads us on an inquiry into patterns and design of stories that reach beyond the traditional narrative arc.

You know, very linear. This one:

Instead, she explores the other ways that stories might develop, and in doing so, Alison surfaces not just experimentation in fiction, but insightful ways to think about character and plot, and writing. She focuses mainly on the three aspects of her title: Meandering, Spiraling, Exploding and adds in Networking and Fractals, too.

This is a short, simplified explanation of my take-away of her ideas:

The book is packed with fiction excerpts that Alison uses as examples of her thinking, and these small pieces of writing were interesting to read and think about, particularly in context of her insights. As a writer, I am now thinking about a story I have been working on — and how I might reframe its design — and as a teacher of young writers, I wonder how I might introduce different story arc techniques beyond the traditional plot design we often use (the one above).

Peace (in text and beyond),
Kevin

PS — At a point in her book, Alison notes that a friend sometimes takes her writing and transforms it into pieces of music. I was curious. Then, I found this musical adaption of Meander Spiral Explode on Youtube, and it fascinates me to no end.

This is what the composer — Christopher Cerrone — wrote as text with the video:

In April 2019, my friend Tim Horvath, a novelist, texted me, “Do you know Jane Alison’s ‘Meander, Spiral, Explode’? It’s a book that focuses on unusual structural elements in novels.” I always trust Tim’s suggestions, and I tore through the book over the next few days, finding it unique and deeply insightful. I experienced what Melville called “the shock of recognition”—seeing someone describe your own efforts (in this case, an in-progress percussion concerto) without ever having seen a note of it.The three words of the title seemed to pertain specifically to each movement of my concerto. The first movement—while dramatic and intense—seems to meander through different landscapes, where the gunshot-like sound of four wooden slats morphs into marimbas and bowed vibraphones while changing volume, key, and context. The second movement (played without pause after the first) is structured like a double helix. A rising scale on two vibraphones slowly expands, speeds up, and finally blossoms into a sea of polyrhythms. As for the last movement (again played without pause): the explosion seems fairly self-evident. A single exclamation point ejects lines of 16th-notes into the ether which return, again and again, to a white-hot core. The propulsive patterns in this movement constantly shift emphasis but always maintain energy. The end of the work brings us back to the first three notes of the piece, suggesting one more shape that Jane Alison discusses in her book: a fractal. The simple shape of the opening turns out to have contained the entire form of the work to come.