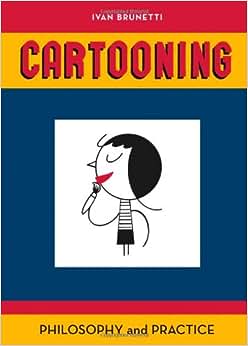 There’s a boatload of good suggestions in Cartooning by Ivan Brunetti on the art of comics/cartoons (terms which he uses interchangeable but which in my mind are different — I think of comics as Calvin and Hobbes and cartoons as The Jetsons — this is no doubt influenced by a childhood of Sunday Comics followed by Sunday Morning television). Brunetti has put a semester-long graduate level course into this small book, with chapters of overview and activities replacing actual desk time at a university.

I had been reading this book earlier this summer because some other friends in a splinter of DS106 and CLMOOC were also reading the book, and we were all doing some of the activities.

I love the concept of comics for the way visuals can help tell a story or make a point or create a joke, but my patience with making the art necessary on paper is thin, and my drawing talents, slim. I’m more apt to use apps or online comic makers, a move that would raise Brunetti’s ire.

I’m not sure Brunetti helped me on this weakness as an artist, but the blame is not with him. It’s all on me. Still, his professorial and rather authoritative tone — do this, don’t do this, in a way in which I could almost see his finger pointing at me — sort of put me off on him as a teacher in the early going. He name-drops comic artist Chris Ware a bit too much for me, too, but then redeems himself in my eyes with a lovely dedication of the book to Charles Schultz.

Since I wasn’t in the actual classroom, I began to skip around a bit (one of his earliest “no no no” in the book, where he nearly demands the reader follow him in sequence or risk injury. Ok. I exaggerate. But he does make it clear, following him in sequence is important). Yeah. No. That’s not how I learn. I’m affiliated with DS106, for goodness sake. I skip around. Liberally.

But, given all that resistance to his teaching style, I recognized early on that Brunetti definitely knows the field, and his advice on the art of making comics and writing visual stories, and of the ways one must consider the placement of lines and characters and dialogue, and more, is all very valuable and intriguing. It’s clear early on that he has thought through a lot of this on his own and in college courses that he has taught, and his own mentor comics in the book are interesting as examples to consider. 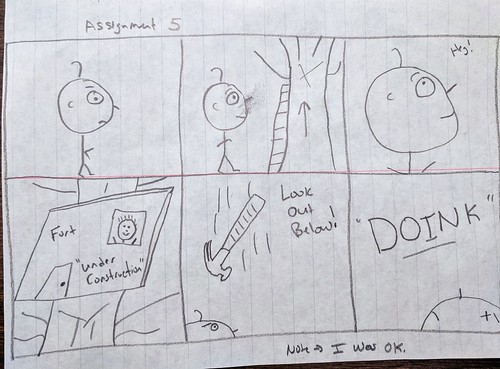 I proceeded to do a handful of his assignments, to explore his ideas, and I found the ones I did to be valuable and fun. Maybe if I had spent the hours necessary, as he demands, on the lessons, things would have come out more polished and clean and thoughtful. But I took some valuable ideas from Cartooning, and what more could you ask for? 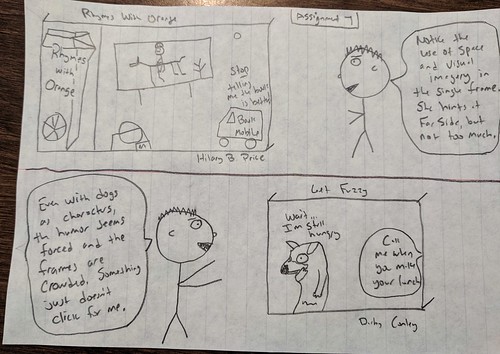