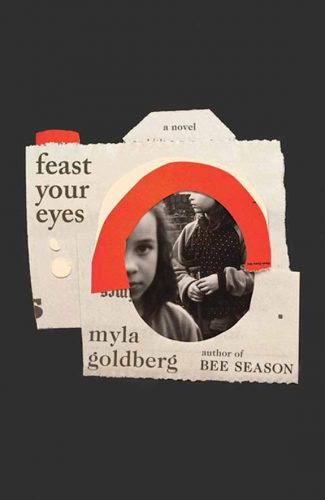 Mya Goldberg’s latest novel, feast your eyes, is non-traditionally told, just how I like my novels. Her fictional exploration of a single mother photographer and her daughter is narrated through the text and journals of a photography exhibit that the daughter has put together for her dead mother, so the text of this book is a collection of journal entries, photographer titles and dates, letters and other writings.

What we never see are the photographs that inform those texts.

And so, as you read feast your eyes, your mind wanders to imagine the images that became the backbone of the story centered on Lillian, whose work as a photographer of her young daughter, Samantha, catapults her to unwanted fame and even prison, for a stretch. This notoriety comes because some of the photos, taken in her home and shared in one of her first public shows, feature a young Samantha in nearly naked form, in childhood poses around their house. The community uproar over pornography versus art rears its ugly head early in the novel, and threads its way through right to the very end of the story.

With that controversy, as well as another controversial image of a bedridden Lillian following an abortion in the days before Roe vs Wade (which is now under fire again in our country, making the reading of these sections even more harrowing) as the backdrop, the novel explores a photographer’s life of viewing the world through a lens, and the struggle to balance what goes public and what stays private, and who has a say in which path is chosen. The voices of both Lillian and Samantha mingle in the texts here, as both seek to understand the other.

This structure and form creates a powerful story, with the formatting of the novel giving plenty of breathing room for the complicated relationship that the mother and daughter have, driven by wonder and art and regret, and ultimately, love.

PS — from an NPR interview, Goldberg explains how she used real photographs to inspire the story.

I was looking through these books constantly for inspiration. Occasionally, there’d be a photograph that was just, like, this photograph is perfect, I want to use it. So the description you’re getting in the book is the description of an actual street photograph. Other times, I would see a photograph, and one corner of it would be what I wanted my photograph to be. So in my mind, I would enlarge it, and that would become my photograph … other times, I would see a setting, and I would sub out one kind of person for another kind of person, or put my own people in the setting and that became my photograph, and other times, yes, I did just make it up. So it’s a combination of all those things. — Myla Goldberg