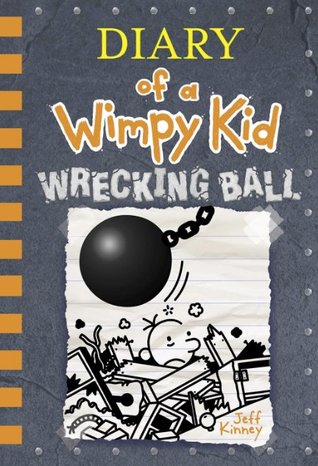 I asked my high school freshman son if he wanted to read the latest edition in The Diary of a Wimpy Kid series. I was surprised, to be frank, when he said yes, thinking he had might have grown out of hte series. I joked that he could probably read it in 20 minutes. I think he did. I did, too.

Why was I surprised in my son’s remaining interest? The series is now going on 14 years — nearly as long as he has been alive — and any series of stories that lasts that long eventually loses its luster. In my sixth grade classroom, as an indicator, only one student this year pre-ordered the Jeff Kinney book. At one time, there were a dozen or more kids eagerly awaiting the arrival of the books, peppering me with questions about when they would get it in their hands.

I read somewhere that Kinney first presented a huge, massive book for publication, only to be told to break it into smaller stories which have become the backbone of the entire series, and it amazes me that he had this all planned out, and each year, in November, another Wimpy Kid book comes out, like clockwork.

And I still read them, too.

This latest — Wrecking Ball — is solid and reliable Kinney. Sort of light on plot (Greg Heffley’s family is doing some home renovations, which lead to predictable disastrous moments) but full of funny scenes and interactions, and lots of visual jokes in the illustrations. Twenty minutes in and I was done, a smile on my face but nothing too much deeper than that.

I was fine. Not every book I read needs to be some deep spelunking of self or the world. Sometimes, what we need is something to make us laugh, to giggle, to connect to a familiar character.

Jeff Kinney’s Diary of a Wimpy Kid series does all that, and the series, even as it might be fading, sparked a revolution of comics becoming more integrated into novels, which in turn brought a whole new generation of readers (including the key demographic: boys) into the world of books. If Kinney does nothing else, he’s done that.