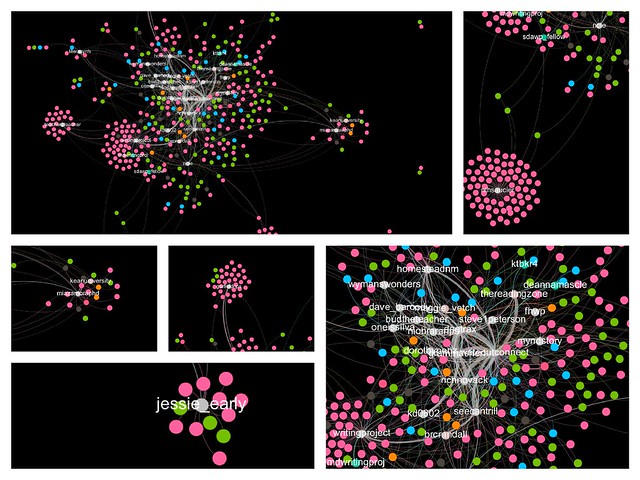 Thanks to my friend, Sarah H, I took part in a three week online course around social media data analysis, and also with huge thanks to Sarah, she had been collecting Twitter information from the start of October’s Write Out project (connecting educators and students to place-based writing, and to the National Day on Writing), and she shared her files with me to use in the course.

I’ll share more some other time about the in-depth observations that I made, but the course itself revolved around three main tools for data analysis — TAGS, which can gather tweets into a spreadsheet; Tableau, which digs down into that data for more in-depth analysis of who was doing what, when, and with whom, etc; and Gephi, which can visualize nodes, clusters, connections and more. (The image above is a collage of some of the views I created with Gephi, to observe the interactions off the main hub of activity).

It’s easy to get overwhelmed by exploring some of these tools, but the course — called Social Media Analytics, offered through FutureLearn — was very helpful, in the ways they had us looking at the larger picture of social media landscapes (mostly Twitter, since others — like Facebook — are closed off from most analysis tools) before learning, systematically and step-by-step, how to set up and use Tableau and Gephi.

Personally, I found Tableau to be more useful than Gephi for the inquiry I was doing — which was based around my own questions of making visible the interactions that took place during Write Out and reflecting on ways to expand the reach of Write Out next year.

A handful of us, who already knew each other from other projects and connections, also created a private back-channel in the CLMOOC Slack, where we could share and ask questions of each other. I found that helpful for the beginning of the course, in particular.

Peace (in the data stream),
Kevin