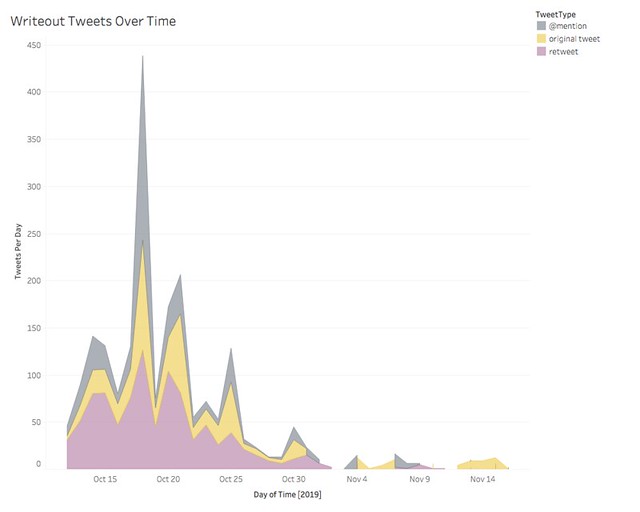 As I mentioned the other day, I have been trying to look at the Twitter activity for the October Write Out project, as much to “see” what happened and maybe to think about how we might expand the reach of the place-based partnership between the National Writing Project and the National Park Service in the future.

I learned to use a few tools in an online course that can help us to analysis data via Twitter, and the chart above is generated from Tableau, a software program that provides different ways to look at gathered Twitter activity around hashtags. The timeline above shows activity bursts over the days of the project — which ran officially for just two weeks  but still has some tweets coming now and then.

The graph supports what already knew — much of the activity of sharing and connecting happened in conjunction with the National Day on Writing on October 20. There was a decision to shift Write Out from the summer (the first year) to October (this year) in order to support and tag on to the work that would happen with the National Day on Writing. You can see how activity led up to the Day on Writing — we had many live Write Out events that were being promoted — and on and just after October 20. Smaller spikes are somewhat aligned to our Twitter Chats, but it would have been nice to see even more on those two Thursdays (something to ponder for the future, I suppose).

The three colors of the chart represent original tweets, tweets that mention someone else, and retweets. While we know it is easy to retweet — click, and you’re done, and maybe moving on — the fair number of original tweets and mentions indicates a nice scale of activity by engaged participants.

I find it interesting the right side of the chart, where people were/are still sharing some odds and ends — mostly images of spaces and small poems, some from students in classrooms of teachers connected to Write Out. Even this week, there were a few tweets with the #writeout hashtag.