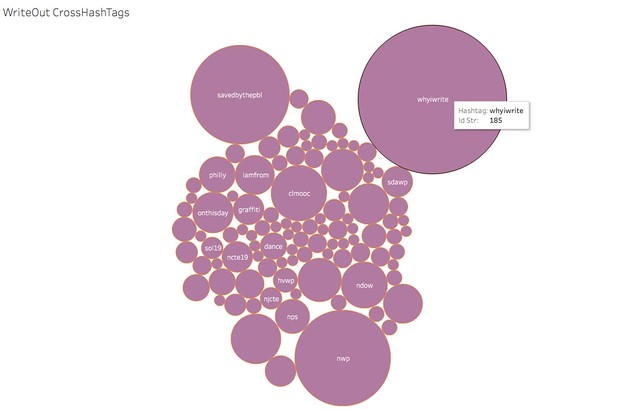 I’m trying to take a closer look at what happened on Twitter with the Write Out project in October through network analysis. I’ve shared out the nodes and clusters and edges of the two-week project and then dove into the timeline of user activity. Today, I want to look at how the #writeout hashtag connected with other hashtags.

This is important because of the cross-pollination effect. What I mean is that when a user with affiliation to different affinity networks makes connections through hashtag combining, it potentially expands the various networks. So when a participant in #writeout includes the #nwp or #findyourpark hashtag, now all people who follow the #nwp and #findyourpark hashtags see the content of #writeout.

Purposeful cross-pollination of content across hashtags in a single tweet is a powerful megaphone. So what do we notice with this kind of analysis, done with the Tableau software? 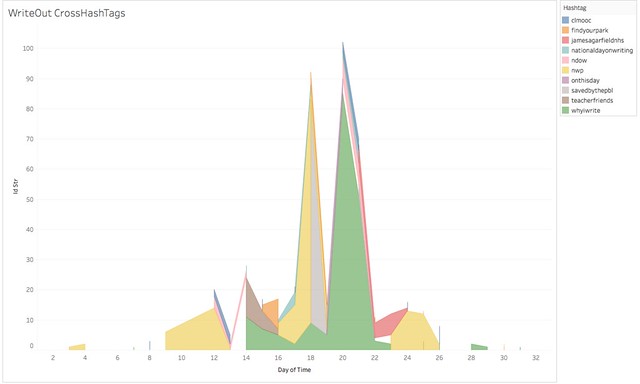 First, the obvious. The Write Out project is supported and hosted by the National Writing Project (and the National Park Service) so the #nwp tag makes sense, as does the #clmooc tag. CLMOOC (Connected Learning MOOC) was an earlier initiative of NWP, and folks in CLMOOC (like me) step easily into projects like Write Out, which is built on similar foundation of connected learning principles.

Second, there are plenty of hashtag connections to the National Day on Writing, which makes sense, since we planned Write Out with the NDOW timing in mind, and made many explicit invitations to NDOW folks to think about place for their writing.

You may notice the variations of the NDOW hashtags, such as #whyiwrite and #ndow, though, as no one single hashtag ever surfaced. There are also hashtags affiliated with NWP sites, who were sharing within their own smaller network while also drawing lines to the larger initiatives.

The one hashtag, and the activity seems substantial, that surprises me is the #savedbythepbl one. I don’t remember seeing it in the #writeout stream all that often during our two weeks in October, although project-based-learning (I think that is the PBL referenced) and place-based-learning (another PBL) have many overlaps, and perhaps the folks who use that hashtag were exploring and creating in sync with Write Out in a way that wasn’t visible at the time. As a Write Out facilitator, though, I am making notes about remembering that hashtag for next year. Those folks were doing something.

Other smaller hashtag clusters like #dance and #grafitti and #onthisday are ones I am not sure about, in regards to connection analysis. It may be that some daily prompt or activity caught someone’s attention. Or it may be that there was overlapping sharing going on, invitations within affinity networks that went beyond what we were seeing. That’s what we hope is always happening. This kind of deeper look makes some, but not all, of that more visible.