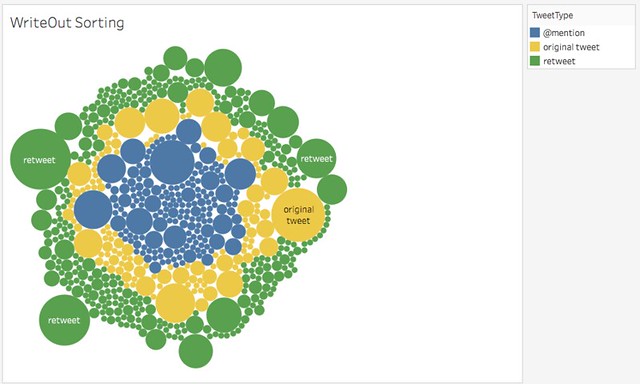 I’m trying to take a closer look at what happened on Twitter with the Write Out project in October through network analysis. I’ve shared out the nodes and clusters and edges of the two-week project and then dove into cross-hashtag analysis and the timeline of user activity

The graph above sorts out all overall tweets during Write Out into the categories of original tweets (something new that a user added to the hashtag of #writeout); retweets (a tweet from someone else that a user tagged and forwarded back into the stream); and mentions (where a user not just shares someone else’s tweet, but adds some of their own commentary or text).

This network analysis look is valuable from a post-project perspective because it indicates how much original material was flowing into the project, and also, whether people were active (tweets, mentions) or non-quite-active-but-not-quite-passive-either (retweets). Part of this flows from how easy it is to retweet, and there’s no real way to know from this kind of analysis whether a person retweeted and then did something else as well (such as created something original as a result of the retweet). It’s also difficult to know if the retweets were fly-by users — someone not really involved in the Write Out project, but who saw something interesting worth amplifying.

It’s heartening to see that the main clusters (yellow and blue here) are mostly original content — either tweets or mentions — which indicates a level of involvement that we hoped to see when designing invitations and activities. Ideally, in a Connected Learning project like Write Out, the overall sense of activity involves original media being shared out and noticed, so some retweeting makes sense.

It’s the green/Mention element that most interests me most, and I wonder if I can dive back into the Tableau software (used for this network analysis) to get a closer look at what people were doing, and who. When a user takes the time to notice, and do something more than just hit the retweet button, it shows a much higher level of engagement. A Mention tweet indicates not just recognition, but also response, and in that responding, the possibility of interaction and sharing.

For us, as facilitators of Write Out, these are the golden moments, for it could be that one person is inspiring another to react or remix or make note of something important. It could be that someone is taking the spark of Write Out and through a Mention, sharing it with a secondary network (sort of like the cross-hashtag analysis from an earlier post). A Mention also tells the maker of the original tweet that there is an audience that is interested, and noticing, and that kind of spark of responsive activity is a powerful element of learning, making, exploring, connecting.

Peace (making sense of it),
Kevin