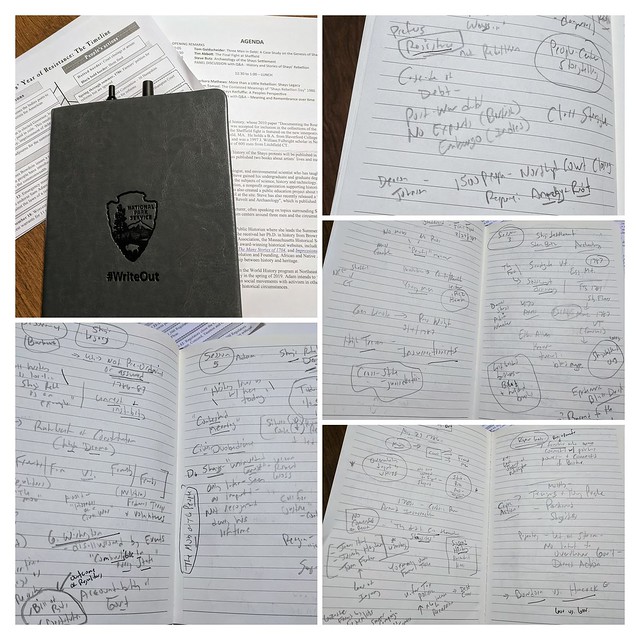 I wrote the other day about facilitating a professional development for teachers, and how we were piggybacking on a seminar about Shays Rebellion at a technical college on the grounds of one of the main events of the uprising. The Springfield Armory, which was known as the Arsenal back then in the late 1800s, is a National Park Historic Site, and part of a partnership with the Western Massachusetts Writing Project in hosting youth and teacher programs. I am a teacher-consultant with WMWP.

The seminar (held on the anniversary of one of the most pivotal events of the Shays uprising) was well-attended, and the six speakers all touched on different but interlocking topics — from the causes of the uprising (mostly, taxes and ineffective government) to the results (the making of the Constitution and Bill or Rights) as well as how language frames what we often refer to now as Shays Rebellion.

One of the speakers —  author Dan Bullen — bristled at the use of the term “rebellion” and urged us to call it Shays Resistance instead. He explained how the government, alarmed at the farmers rising up with arms to shut down courthouses and storm the Springfield Arsenal, labeled it as “mobs” and “anarchy” and more. Instead, as the research shows, the men who who joined Daniel Shays and other leaders were mostly peaceful, but pushed the edge of limits by a government that was beholden to the business class, and where debtors prisons were the norm. (Dan Bullen is going to come to our next PD session as a guest and resource)

Even a federal designation of Shays Rebellion Day in the 1980s by the federal government through executive order by President Ronald Reagan, and its chief sponsor — US Rep. Silvio Conte — shows how modern politicians seek to twist language to their own message. One of the speakers focused on this executive order to show how historical events become a prism for messaging.

We’ll be grappling with some of this use of loaded language for political gain in our upcoming smaller PD sessions (there are more than a dozen local teachers involved in our work) and how the echoes of civic action from the time of the post-Revolutionary War still resonate today — from eerie parallels to the most recent Housing Crisis/Recession (common people lost their homes to speculative traders as banks got bailed out and regular homeowners were penalized for the shady dealings) to the rise of youth over issues of importance, such as climate change and gun control. (Many of the followers of the Shays Resistance were also young men, in their late teens or early twenties).

One of the more intriguing presentations was an archeological dig of a remote mountain location in Vermont, where Shays and his followers escaped to after being hunted by the Massachusetts militia, and they set up a large settlement there on Egg Mountain which had long been forgotten and grown over. The presenter has spent a few years, including working with students over summers, to slowly uncover the network of homes and buildings of where Shays ended up for a number of years, as an outlaw or hero, depending on the perspective. Connecting archeology to local history is always a cool inquiry, and his was a pretty fascinating story.

PS — Here is Dan Bullen on our local radio station, talking about his interest and his book project centered on Shays