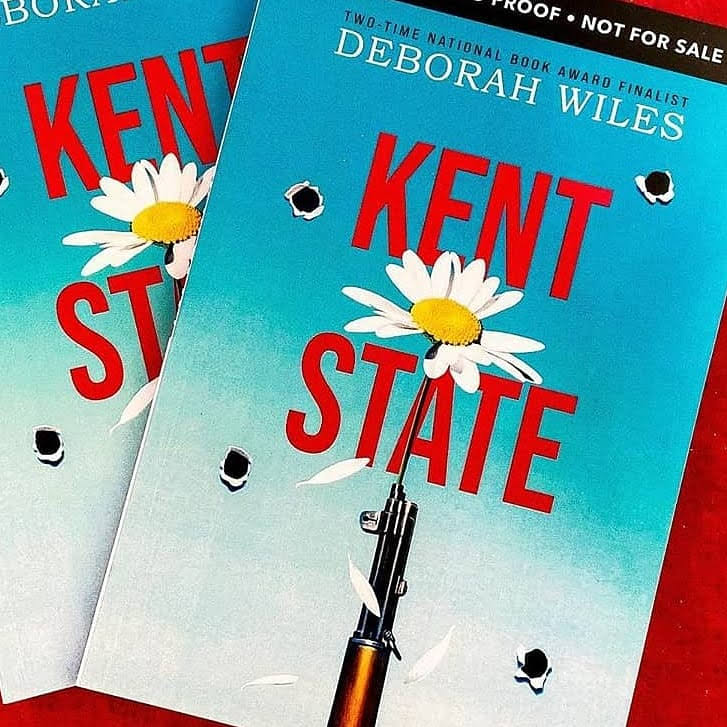 A wife of a teaching colleague sent along her copy of Kent State, by Deborah Wiles, many months ago, with a recommendation that I read it, and there it sat, until last week. I had not an inkling that the anniversary of the shooting of college students by the National Guard was even approaching, never mind the 50th anniversary (which is today), when I picked it up last week. I only had a gap in my reading list, and the book filled a need.

Talk about good timing for a book and a historic event.

I was immediately drawn in by the experimental use of voice in this well-researched book by Wiles, who taps into the concept of the collective Greek Chorus, of giving voice to various factions of the time and place, through use of font style, size and page placement. The way the page looks helps to tell the story. Although somewhat a free verse novel, the passages don’t read like poems, more like gathered voices standing on the page, arguing points about what happened at Kent State on May 4, 1970.

We read/hear different student perspectives (the calm voice of sadness and the frustrated voice of anger; the Black voice of student protest wading into the racial contours of America’s response to the white college students killed by gunfire by the American government); the townspeople (irate businessman and scared mother of small children, the one who remembers the military helicopters most of all); and the National Guardsmen, too, explaining how young they were and how chaotic the college protest was for them.

These voices weave in and out of each other, as the story of Kent State unfolds over a weekend, starting with unrest on the campus over Vietnam and the federal and state government, leading to the shooting on campus that shocked and rattled the nation. Wiles explains at the end of the book how she spent a lot of time with oral biographies and with personal interviews, to capture the tension and confusion, the anger and regret, the voices of the times for her book, and her effort to be true to the event and the people shows.

There is no single point of view in Kent State, as there should not be although we often only know the story of soldiers killing college students, thanks in part to the song “Ohio” by Crosby Stills Nash & Young (a song that my band still plays).

This short but powerful book ends, as it begins, with a call to the reader (to us) to show empathy to all sides of the tragic event, and to be the one (you, I, us) who helps make the changes that make for a better nation.

I would say this book is most appropriate for high school, but some upper middle school readers might enjoy it, too. It could easily find a home in a Social Studies/American History classroom, as an example of how to turn research into a work of experimental art.