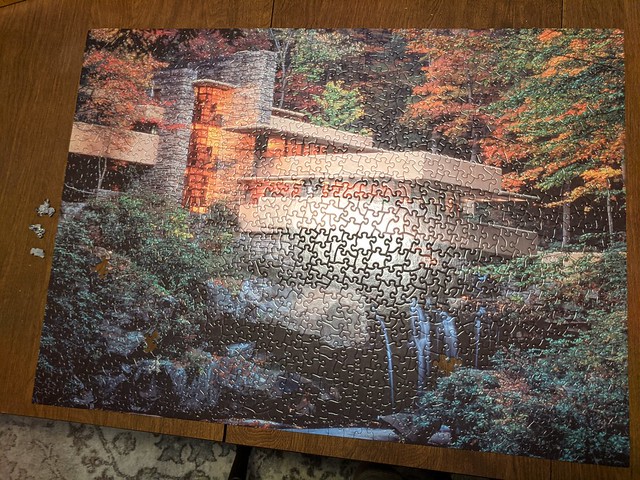 Today’s Slice of Life is a gathering of smaller slices.

First, after starting this 1000 piece puzzle in the days after we left school in mid-March (the first puzzle I have done since childhood), my wife finally put the last piece into the dang thing the other day and finished the scene (Falling Water). The four pieces our puppy chewed made completing the puzzle even more difficult. I started strong in March and April, and even May, and then lost patience at the end in June, but my wife was dead set on finishing and not giving up on it. We finished because of her perseverance.

Second, I received word that a poem I had submitted a few weeks ago to a regional writing guild — the Straw Dogs Writing Guild — had been accepted as part of its Pandemic Poetry collection, and will be a featured poem with the guild in mid-August. The poem is something I wrote for/about my students right near the end of the school year. I’m happy that it will be part of the collection at the guild because it will keep the spirit of that class alive in different places, including my heart.

Third, I wrapped up the collection of songs – Notes from a Quiet Corner — that I have written during this time, and was sharing it out with family and friends yesterday, sending songs and beats out to everyone in my own little celebration of being creative and sane in one way I know best: writing songs and recording music.

Now I am gearing up for my summer break from blogging and most, but not all, other social media connections, starting tomorrow with the beginning of July.

This morning’s poem captures that, I think: