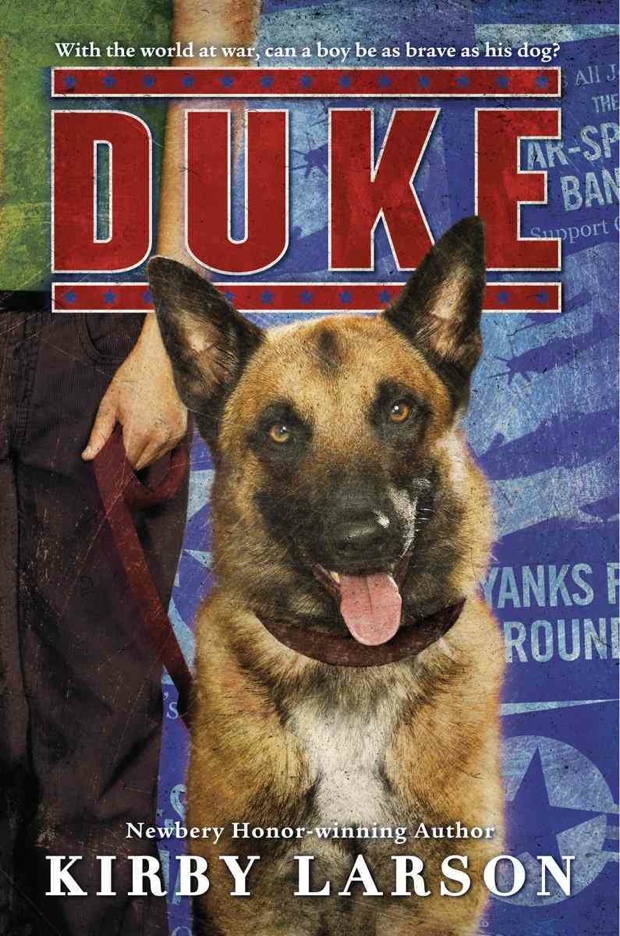 This is a book about a dog named Duke. I have a dog named Duke. How could I not read this? Kirby Larson’s novel for adolescent readers is less about Duke, however, and more about 11-year-old Hobie, who gives his dog up to support the effort in World War II, even as his father is flying Allied airplanes in Europe.

The Duke of Duke (Dogs of World War II) is a German Shepard, who comes home a hero, but not after Hobie regrets volunteering his dog for the war effort, particularly once he realizes that Duke and his new soldier friend are heading to the warfront in Asia. The novel follows Hobie as he grapples with the absence of his dog, and then his father, who is reported as a Prisoner of War, and helps his mother and sister at home.

The theme of the story emerges as things get worse before they get better and a kind uncle fills in as Hobie’s father-figure, as a well as the soldier whose life Duke eventually saves (and many more), letting Hobie figure out to be brave, and scared, all at the same time. Some side stories — such as the German immigrant family that moves into the neighborhood and the school bully who takes aim at Hobie — give depth to Hobie’s experiences as a fifth grader moving into sixth grade with uncertainty around him.

This book is a powerful narrative, aimed for upper elementary and middle school students, and if you have readers who love dogs and who are interested in World War 2, Duke is the book for them. Even my Duke approves.

Peace (among the heroes),
Kevin