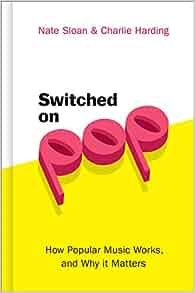 Nate Sloan and Charlie Harding are music nerd friends who host an interesting podcast — Switched on Pop — that became the anchor for this book of the same name. In it, Sloan and Harding dive into pop music to figure out what makes songs and styles tick. In doing so, they brilliantly bring us deeper into tracks and showcase things you might intuit as a listener but not have the vocabulary or expertise to completely understand.

This book — Switched On Pop: How Popular Music Works and Why It Matters —  is fantastic in this regard, and Sloan and Harding make a perfect set of tour guides, being both ecstatic about the songwriting and production moves they uncover as well as pointing out the tropes that have long been hallmarks of pop music culture, whatever the decade.

Starting with an analysis of Carly Rae Jepson’s Call Me Maybe, to Outkast’s use of unusual rhythms in Hey Ya; to the use of voice and timbre by Sia in Chandelier to Justin Timberlake’s use of “text painting” in What Goes Around; to samples as collage by MIA in Paper Planes to a comparison of two song with the same titles — Made in America — the Toby Keith version side by side with the Jay Z/Kanye West/Frank Ocean version … the paths of this book are varied and deep.

They reference Swedish producer Max Martin numerous times — he is the one who has crafted songs over the last decade or more for Brittney Spears, Kelly Clarkson, Taylor Swift and many more — and while the writers note how often Martin seems to fall into tropes, he also is adept at adapting to the changes of production and sound and song types, transforming the way pop music is made and heard. A brilliant essay here shows how Maps by The Yeah Yeah Yeahs was used by Martin to create Since You’ve Been Gone by Kelly Clarkson.

The book ends with a look at one of Paul McCartney’s strangest releases in recent years called Get Enough, which weaves Auto-tune and modern sounds with some old fashioned instruments and McCartney’s ability to craft another “silly love song” for the modern age.

If you are a songwriting (as I am) or love music (as I do), this book is well worth your time. I highly recommend it, if only to give you another way to “hear” the songs that make up the musical landscape of radio (remember that?) and YouTube and culture.