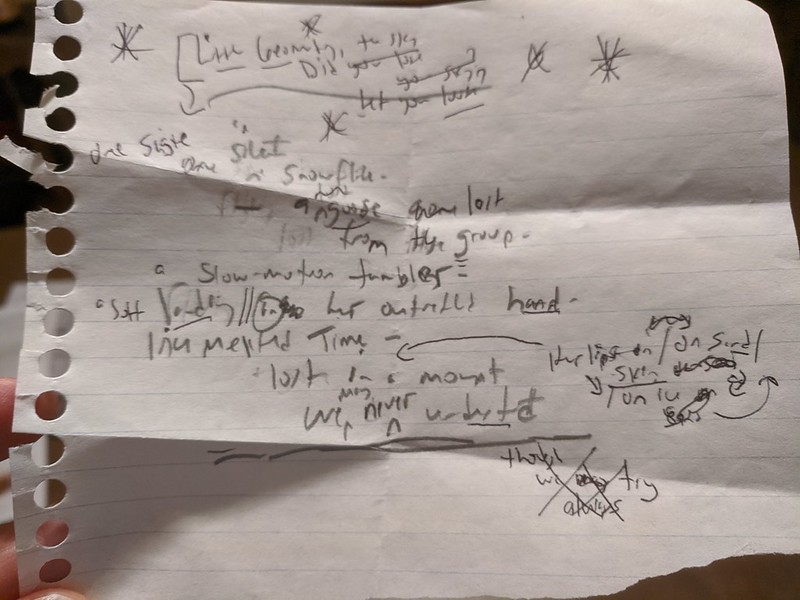 I had taken and uploaded an image of a piece of paper where I had been handwriting a poem (read Little Geometry) through the day last week after watching a student catch a snowflake in her hand.

I’ll be the first to admit that my handwriting is nearly indecipherable to others (my 10 years as a newspaper reporter is to blame, I always say, although that work in making quick notes while interviewing people probably just exasperated a situation already in place). Sometimes, it’s indecipherable to me, particularly when writing songs.

Looking at the image, I saw that the Google Photos app, after I had taken my picture on my phone, was prompting me with the question of, Did I want it to grab the text from the image? (off the picture of the paper where I had been writing). Google Photos wanted to see what I had written. I had seen this option before for other images but always ignored it.

This time, I clicked forward.

First, it’s interesting (alarming? useful?) to think of technology taking words turned static in an image and reverse-engineering it back to text. Second, I was curious. What would this bit of AI make of my writing? Well, clearly, it couldn’t make heads or tails of it all.

Interesting …. nonsense. Good luck with that, Google. Which, you know, I’m pretty OK with. If my style of writing eludes the AI overlords, then maybe Poets will have a chance of resistance when the machines continue to take over the world.

Peace (scratching it out),
Kevin