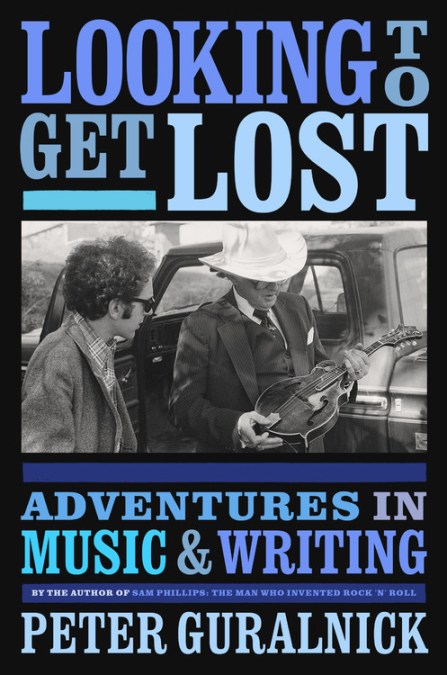 If you read books about music, as I do, then you likely know the name of writer Peter Guralnick, whose explorations of the blues, of Sam Cooke, of Sun Records, of Elvis, and many more go deeper than most books do to the heart of what music is and how strong the heart of performers beat.

In his recent collection of essays, entitled Looking To Get Lost (Adventures in Music and Writing), Guralnick keeps his attention on the music but also turns it on himself, too, as a writer who found himself on the music scene because of a passion and used his skills as an interviewer and a researcher to make visible the terrain of artists, particularly those from the South, and particularly those black artists whose work paved the way for rock and roll and modern music.

The book is a gathering of mostly shorter pieces, and some of the best take a look at the raw talent of Howling Wolf, the expansive innovative energy of Jerry Lee Lewis, and the soulful enigma of Solomon Burke, and much more. A consistent thread through the pieces here is the humanity and patience of Guralnick as he weaves in the stories and the impact these men (for they are all men that he looks at here) have had on American culture.

I also found the pieces about Guralnick as a writer intriguing, as he talks about his own feelings of inadequacy in talking with the musical greats he so admired, and how his father and grandfather (both doctors) supported his idea of being a writer at an early age, instilling confidence that following your passion will lead you somewhere (although sometimes, that somewhere is not always where you think your passion will lead you).