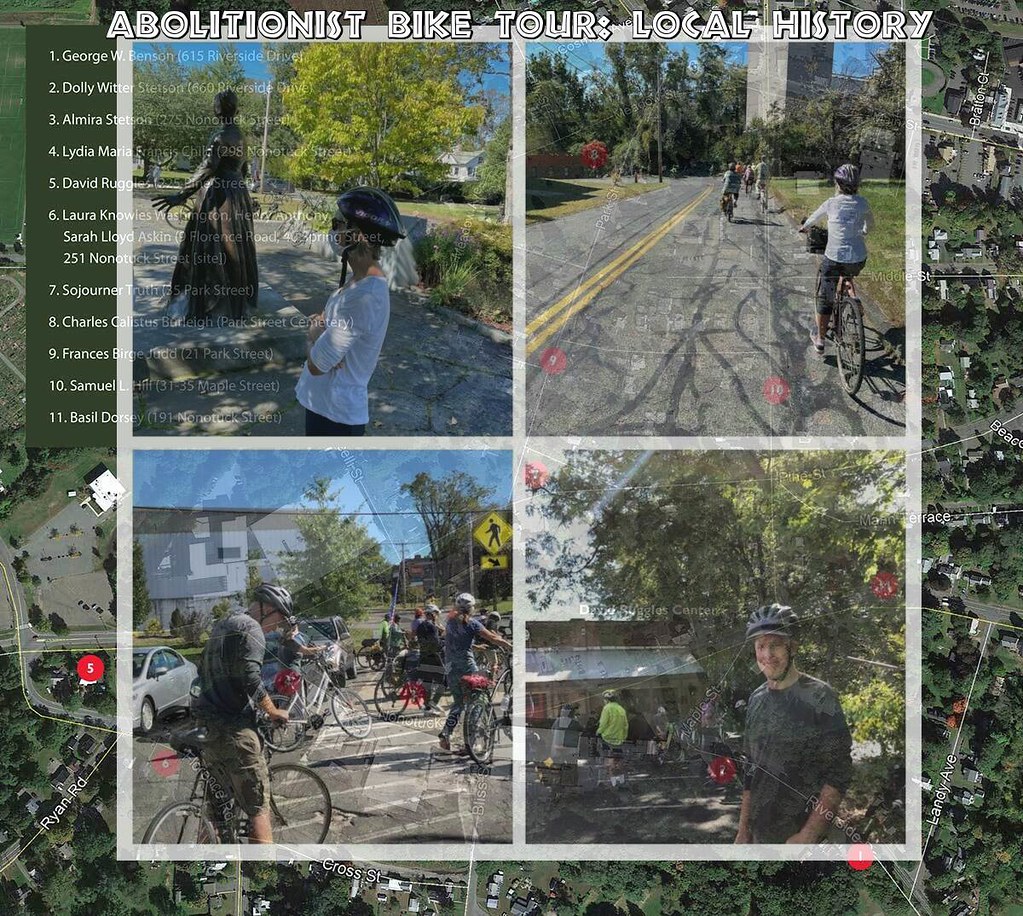 My wife and I biked our way through pathways of local history the other day.

Although we know some of the past echoes of the Abolitionist Movement in one of the villages of our small Western Massachusetts city, we learned a whole lot more when we joined in a three-hour biking tour that visited stops where important people either lived (Sojourner Truth, David Ruggles, etc.) or visited (Frederick Douglass, William Lloyd Garrison, etc.) in the 1800s as the push to end slavery was just taking hold in the north.

This ride was sponsored both by our local rail trail association and the David Ruggles Center, which has tons of information about the “free-thinking association” that sprung up in Florence, Massachusetts, that brought many forward-thinking people to this area for work and to live, and to become ardent activists in the movement. More than a few houses here were also part of the Underground Railroad, and Florence is part of the official Network to Freedom of the National Park Service (which I didn’t know).

As we biked with about 30 people, we stopped at different homes and locations, where a representative of the David Ruggles Center for History & Education brought out pictures and read quotes and gave context to the lives of so many of the people in this particular local history story. Ruggles, for example, was a black man who worked to help freed and escaped slaves. He came to this area to start a Water Cure operation that was quite successful, and then used his many contacts in Boston and New York City to help support the core group of leaders for the Utopian community that sprang up here.

The Northampton Association of Education and Industry was a group way before its time. Women were equal to men in all aspects, and children were both educated in academics and in work, and pay was distributed equally among members. They ran different mills (silk, etc.) and held raucous meetings of debate.

Our bike ride took place on such a beautiful day, and even ending the tour in a cemetery could not dampen the understanding that our small city is more important to history than even we understood before setting out that morning.

There are self-guided and virtual tours available, and the Ruggles Center has recently used grants to complete and publish a comprehensive, primary source-focused curriculum for middle and high school students.

Sometimes, you see your place in a different light, if you take the time to notice.