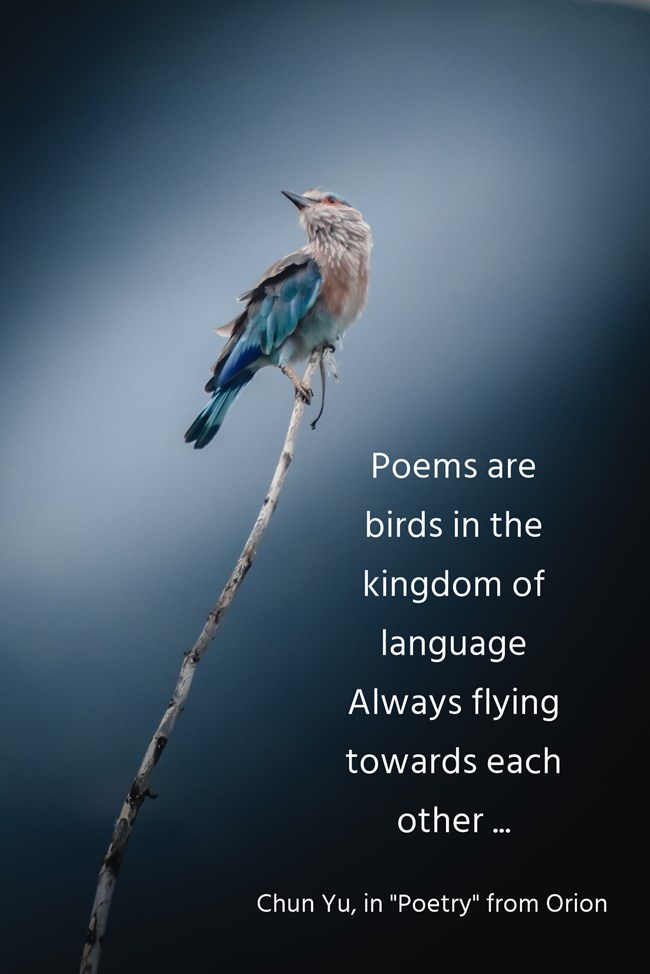 Last week, I released six “birds in flight” poems, one per day. Here, I’d like to provide some context notes and process decisions, as well as tech tools,  for each poem, as both a way to share my digital compositional practices, to reflect on what worked and didn’t and why, and to archive my notes, for my future self (hello, me).

My poetry collection began not with writing but with reading a poem and sharing it with friends. In an edition of Orion, a nature-writing journal, there was a lovely card stock pullout of a poem called “Poetry” by Chun Yu (one side was English, and the other side, Chinese). I can’t find it online to share here, and I don’t want to infringe on copyright by sharing myself. But the poem was lovely, with a theme of poetry.

I did share it with my poetry friends in the new closed NWPStudio Space, however, and my collaborator and colleague and poetry ping-pong companion, Terry Elliott, paid attention to and noticed the architecture of the poem. Terry then pulled out some guiding prompts that could become a flexible template for writing a poem, inspired by Chun Yu’s “Poetry.” It was from Terry’s excavation of ideas that I wrote a small poem each day, for six days, using the opening lines from Chun Yu’s poem of birds (see above) as my theme.

Here, then, are my six poems — my six Birds in Flight, if you will — and a reflection on how I created the digital versions of them and the decisions that I made to do so.

For poems with small amounts of words, like these, a site like Lumen5 is perfectly situated. It is a digital storytelling site that allows many choices for image and video, with text, and music, and even the opportunity for voice-over (which I decided not to do here, as my experiment with it seemed to take away from the contemplative nature of the visual poem.) The most important decision here for me became the soundtrack, and I grappled with how the music would inform the words and image. In the end, I found what I still think is a perfect sound companion to the poem — it gives it just enough calm, and includes the sounds of birds.

I knew I would be diving into digital composition with many of these small poems so I wanted to hand-write out a poem, as sort of a counter-measure to complete immersion with digital. Of course, I did it via an app (Sketchpad), and then thought about a reflecting pool or image of the poem, and remembered an effect in LunaPic that could do that. It worked nicely, I think, given the hand-written text a little more depth and wrinkle, or maybe, ripples. That I chose a piece of paper theme for the writing makes it even more interesting in the reflection, I think.

This poem used an app I tap into quite a bit for animating words. It is called TypiVideo and it has some strange quirks (you can’t control what words on a single screen at any time after you input your entire text, so there are often odd endings of phrasings). But there are neat options for font and color, and I like how the text flows forward, and have come to appreciate the unexpected breaks. After creating it, I felt as if it were missing something, so I created a music track with thoughts of flight and layered it in, giving the words some ambience.

This poem used a text animation app on my iPad called PLAYS that I come back to now and then. It has a solid collection of animated options, some of which are too busy for any use by a poet, though. I found one that had the text moving off the screen like a bird in flight (similar to the next poem’s construction). But when I had built it and exported it, it seemed like it still needed something else. I pulled the animated image into LunaPic (always a useful image editing site) and found an effect that turned the piece yellow and faded at the edges, like a corn husk (sort of) that connected to a phrase in the poem. I like that when the words leave, there is an after-effect of a splotch of light yellow, as if the poem has left a mark.

I knew I wanted this poem to be its own poem but also to reveal a second poem after the words “flew away” into the sky. I used Keynote to do this, and it took some time, as different words and lines had to be their own text boxes that could be animated or remain stationary as the poem flew off like birds in flight. (This could have been done easily enough in Google Slides or Powerpoint, too). I like that the poem I left behind or that was uncovered is more positive and optimistic than the poem pieces that depart. Exporting as a GIF allows for the poem to reset itself each time.

This last poem was the most complex composition of the collection. I had been curious about whether I could turn the words of this poem into music. Of course, I could have sat down with my guitar, but I wanted to push the concept of AI, so I searched around and found two sites: Langorythm (which converts words into midi-file music – see this) and Melobytes (which converts text into what I can only describe as an odd piece of music, with even stranger video, and also, interestingly, a piece of music manuscript). I had been tinkering with both when I realized I could merge the output from both sites, using the melodic music that Langorythm created from the text of the poem beneath the video and manuscript created from my poem by Melobytes, and then, realizing this composition needed some stability to center the actual poem, I added my voice overlay to video. At one point, I had an entire earlier version of this project that I did all the work on, as finished project, and then I could not shake the sense that the “feel” of the Melobytes output was all wrong. So I started over from the beginning, and began construction again. The result is something interesting, if unusual.

I hope this both helps me to remember what I did, but also inspired YOU to tinker and play with digital compositions, to see how we might use technology to further put poems into motion while trying to deepen the composition’s impact on a reader, viewer, listener.

Peace (on wings of words),
Kevin