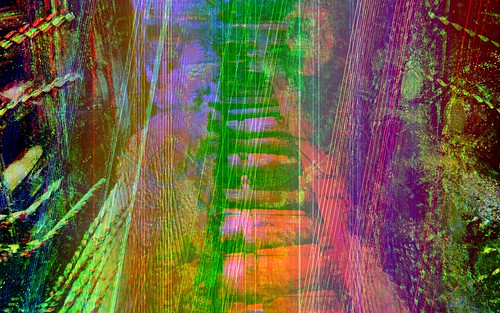 I was curious the other week about whether I might find any online AI-powered sites that take text and turn those words into music. Honestly, I didn’t think my search would be all that successful. But it was. To a point.

Here are three (free) online sites powered by algorithms that I found and tinkered with. I am going to use the paragraph I just wrote as the intro I just wrote to this post as the text that I want each site to turn into music (See words above). Each of the sites will use the same exact text.

First, there is Typatone, which is one my favorites here.  You can either type the letters/words, and hear the song as you write (which is pretty cool but if you are like me, I make a ton of mistake as I type and so that feature is less useful than it would seem). Or you can input your text and let the site do its thing.

One annoying quirk is that once it starts playing, there’s no pause button. Sorry. I think watching it and listening to it is the best, though, so just an audio file to listen to would feel rather empty as an experience.

Here is my test.

Another is Langorhythm 2.0 (which is explained in a neat TED Talk that assigns notes to letters). I liked this site for its simplicity but soon found that the timbre and instrumentation never changes from the original conversion — it is the same tones for every letter, which makes sense if you know how the algorithm was created. But it makes it sort of … a sameness when doing multiple projects.

That said, the site kicks out a MIDI audio file, which is quite useful for anyone who has a digital music workstation. I use Soundtrap, for example, and so it was easy to change the instrumentation from the generated Rhodes piano into something a little more … interesting.

Listen to original and then my remix (changing the sound/instruments)

The third, and both most robust and clear strangest of the sites, is Melobytes (I worked with the free Pro model — I assume it’s free for a limited time?). Here, you have many more setting options (too many, perhaps), although I was never sure how the piece would sound when I was done with it. And mostly, I found the site interesting in an analytical way but too randomized and jarring to be easy listening, no matter what I did with the settings (and you have a limit on free access to how many times you can reset the conversion). The videos (with AI chosen images) were weird every single time and the vocal sounds, even weirder.

What I did find fascinating, though,  with Melobytes was that the site creates a piece of musical manuscript for the inputted text that forms the basis of the audio file it generates. Here’s my same blog intro, written now as music that I could play. I don’t know the critera for how it determined length or tone of notes, etc. (And I think there may have been a second page with the word “point” on it that I missed.)

What does this all mean? I don’t rightly know. I have only a vague notion of how the sites took my words and kicked out sound. As a writer who loves sound and music, and is both interested and skeptical of the age of AI, I find these experiments to be helpful in understanding both how far computers have come (caveat: free online availability) and how far they have to go.