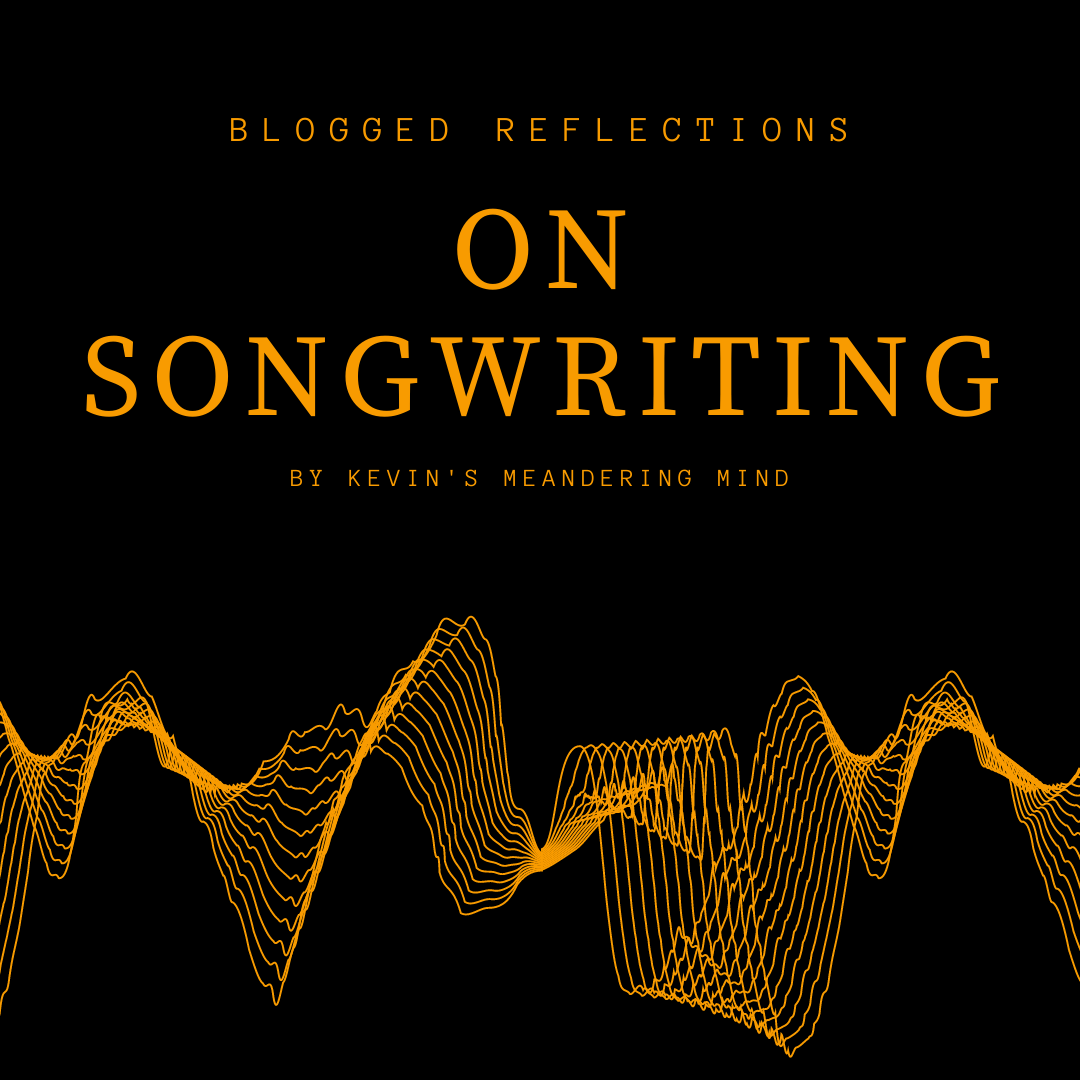 (This is the first of a potentially periodic post about writing songs.)

I don’t know what this blog post is or what this post will be. But I started writing a song last night and I wanted to document where this particular song might go and how it came to be.

That’s one of the beautiful things of songwriting, though — the slippery qualities that allow some songs to remain in the mix of regular playing and others, that just disappear. Maybe the melodic hook isn’t good or something’s not right. Maybe the words and story of the song don’t resonate. Maybe the song’s missing a bridge and there’s something elusive about how to create a connector point between verse and chorus (or maybe you don’t realize a bridge isn’t needed).

Last night’s kernel of a new song — not even named yet — began, as many of my songs do, as an accident. I had fumbled some chords from another song, and found I liked the sound of what I was hearing. I followed it further, as I long ago discovered that paying attention to the mistakes sometimes opens up another door.

I left the other song to the side and began to tinker around with this new chord, and then discovered the next place that chord could lead to. And then I found another chord. Then another, and suddenly, I had a five chord turnaround that sounded pretty interesting to my ears. There was potentially something there.

You can listen to what I stumbled upon:

The mystery for me of writing lyrics is this: I never really know what I’m doing at the beginning. (Or is that just my own singular mystery? I guess those pop music producers know their formula for radio glory). There are times when I have a theme or a turn of phrase in mind, but not often. More likely, I enter a song, cold or by mistake. As with this one.

What I do, myself, is just start singing something, anything, without thinking about what it is at first that I’m singing (some songwriters hum a melody but that never worked for me). I open my ears to listen listen to my voice (and both mouth and ear seem remotely disconnected from the guitar, where my fingers are now mostly on auto-pilot). I’ll hear a phrase, or a word, or a line, and then, by singing it over and over, I let my voice shape the rhythm of the words.

And I am furiously scribbling down words on paper what I can, so I don’t lose it in the moment I am creating it. I am shuffling madly between guitar and pencil and paper.

Interestingly, it’s almost as if someone else is making up the song and I am just paying attention. I let myself wander. I trust my mind. Which is weird when you’re in that moment. Yet it’s powerfully interesting magic, too, as the writer in me is separated from the listener in me which is separated from the musician in me. I think it’s these exact moments that makes songwriting such an inspirational creative experience for me, and why for many, writing a song is so daunting. You have to let the unknown make its way into the world.

Or, that’s my approach.

At this point, as I am playing and singing whatever comes to mind, I’m hoping for rhymes that will string thoughts together, but the rhythms of words also seems fundamentally important here as my ears now work to merge the guitar and voice, and I am editing the lines as I sing them, on the fly, tweaking and tinkering — add a word here, replacing another there — until I come to understand the story, or the character, or the message, and if I get the first line or two down, then the rest of the lyrics often unfold much easier because the opening lines are the map, forward.

I find I often write in first person, even though many songs may not be about me. Even so, the lyrics most certainly have parts of me in them, even when I have another character in mind. My insecurities. My loves. My wonder. My failures. My curiosity. I can pull out a sheet of lyrics and know, myself, exactly where I am in any single song, at any given time. I try not to be too careful in protecting myself, but I am, and if a song is too personal, it never leaves my practice space.

Last night, when I had to leave this particular song, I had two verses and the framework of a chorus set into motion. I had moved the capo up and down the neck of the guitar and found a spot for it (fifth fret). I long ago learned that unless I can come back and play the guitar part and sing the melody at least a handful of times through a day, with gaps of time away from the song, I am apt to lose the inspiration. What I had …  will just disappear.

Here’s what came to my mind as the opening lines on this song:

Sunday morning weather
I don’t even know where I stand

I often record a rough demo on my phone (which I did for this one), so I can listen and remember the next day the threads of what I was working on. (I’m listening as I am writing this morning). When I was younger, I would walk around for hours with a new song and new lyrics dancing in my head, all day long, like some internal pirate radio, but I guess I have too much going on upstairs with school and family and life, and that technique no longer works for me.

These days, instead, I try to be “in the moment” when I sit down in my practice space to write, and to give the creative space my upmost focus, and to hope a song spills out from the consciousness that might even be worth keeping. And then I hope I pick up the threads of anything resonant, later.

A songwriter has to have faith in the creative process, for sure.

Today, for example, I’ll be searching for the threads of the song again, and try to make sense of what I started yesterday. And if a song still emerges from yesterday’s dreaming, I might have a second blog post soon, to continue this reflection on where a song of mine comes from and where it goes.