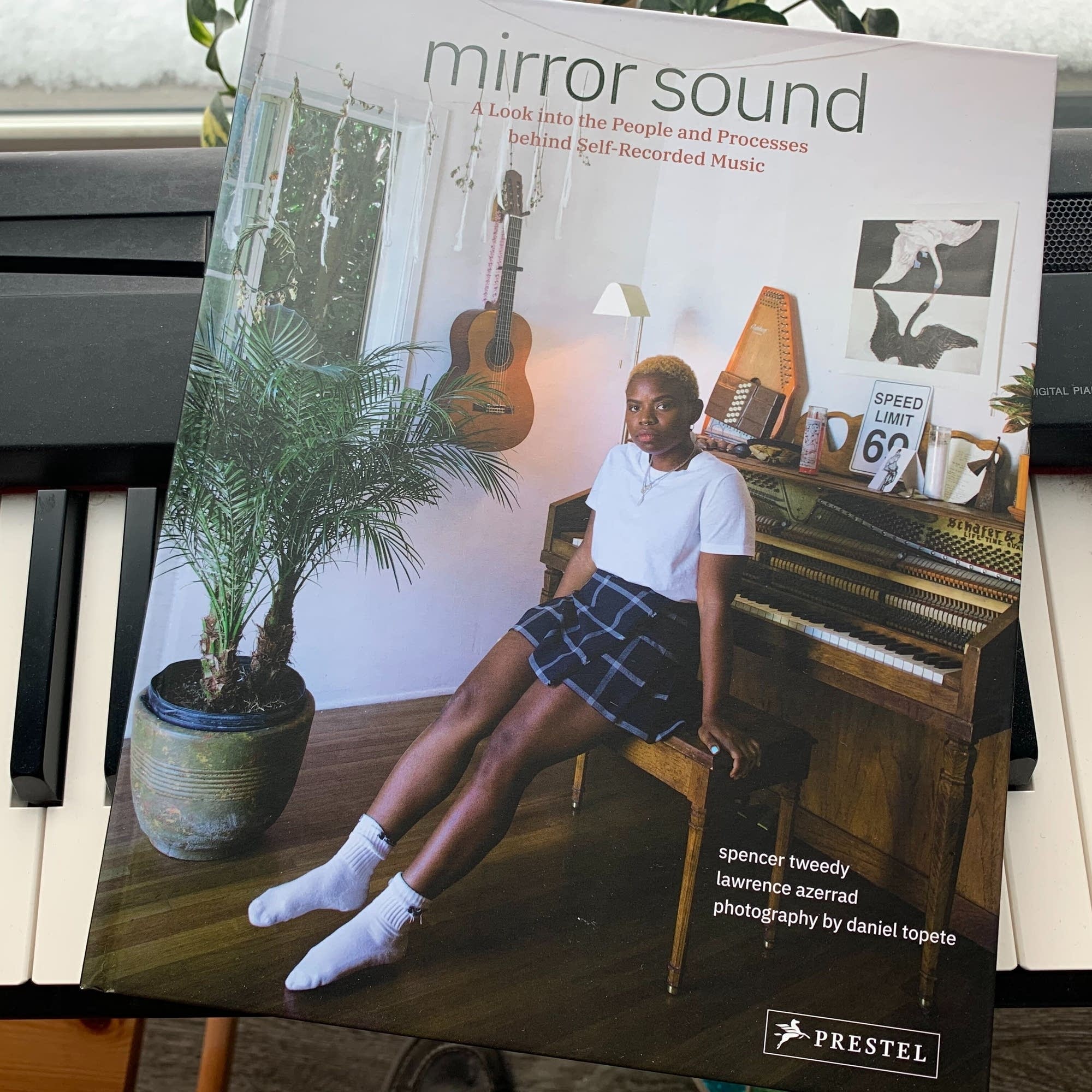 The very first songs I ever wrote and then recorded were done on a little Tascam Four-Track machine that a friend (Murph) borrowed from another friend (Eric), and we set it up in a basement room in my house. We were teenagers. We used a microphone to record some Casio keyboard drums, and layered other sounds, and added vocals (ack), and the magic of the moment when we had a “mix” of that first song was … amazing.

You can even take a listen (because I try to keep everything). The song is called Follow That Dream. It’s hard for me to listen — the lyrics, the voice, the mix … but you can hear some of what we were trying to do with our production as beginners. What you can’t hear is how excited and focused we were, to be recording songs we had written.

That memory has been lingering in my mind as soon as I began reading Mirror Sound (A Look Into the People and Processes Behind Self-Recorded Music) by Spencer Tweedy, Lawrence Azarrad and Daniel Topete.

In this oversized (and pricey) table book — full of cool photographs of underground and independent musicians across genres and genders — the three men (Tweedy is the son of Jeff Tweedy, of Wilco, but an accomplished drummer and producer in his own right) dig deep into what makes music makers creative, and how a home studio format (either simple or complex) helps these artists to chase their musical threads.

I found every page fascinating, even though I barely know any of the artists in this book. What struck me was the articulation of the creative mind at work, and the desire to make music and follow your paths, for yourself first, and maybe the world, second. These musicians are driven by the need capture the sounds and songs they hear and feel, with little regard for audience (at least, in the making of music part of things).

While some of the discussions went technical (about microphones and set-ups and software), Tweedy always seems to ground the discussion to the creative mind, and to the motivation, and to what it is about recording your ideas on your own that keeps the flame of making songs alive for each of these artists. The first section of the book is mostly photographs, intimate shots of people’s bedroom studio spaces (sometimes, it’s just a bed with a laptop and a guitar), with some enlarged quotes, and the second half is packed with interviews with the people. I enjoyed both parts, and the book itself is a beautiful piece of visual art.

After my friend, Murph, and I recorded those first songs, we were able to “steal time” at night one summer in another friend’s garage where he was slowly setting up recording equipment. We’d tinker in there, and make some tapes, and sit and listen in the car.

Later, I saved up and bought my own Tascam (which, reading here in this book, was a revolutionary product for many musicians, for its affordability and its ability to layer four tracks, or more, if you bounced tracks down) and I spent countless hours in my room, by myself, playing around and experimenting. (Murph, my friend, later went on to build his own recording studio as a business.)

These days, I mostly use an online site  to record and layer tracks, although I have an old Tascam in the basement and a cardboard box full of master tapes somewhere (probably gone bad with time).

And I am still mostly writing for an audience of one — myself, and the hope that I will stumble upon something interesting, and follow that path into a song. When it happens, there’s nothing quite like it. That’s what Mirror Sound captures on the page — that sense of wonder and magic of making music.