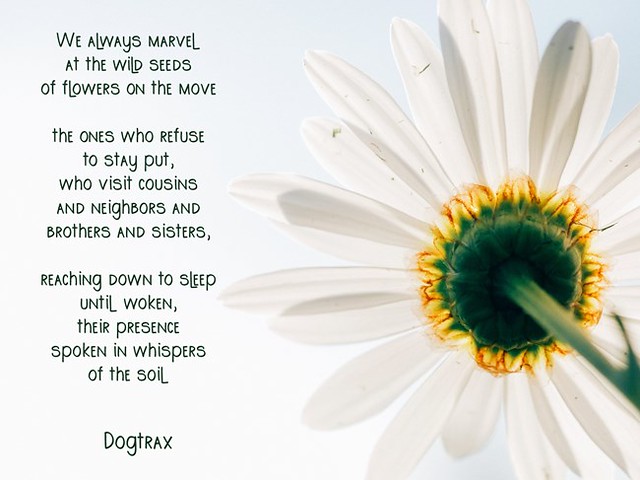 We took my wife to a Mother’s Day flower show held at an estate out in the Berkshires on Sunday and it was beautiful. Most of the flowers had been just days into a Spring Bloom, and the estate – owned by a conservation agency that we are members of — is well maintained. There were tens of thousands of bulbs all over the grounds. We had a lovely time.

What caught our attention most, though, were the stragglers, the flowers who were rooted in places they weren’t planted, and I won’t say, didn’t belong, but that were confidently out of place with the rest of the plantings around them. Either moved by animal or insect — or who knows, human hand — these flowers provided a nice visual contrast.

So, when, over at Mastodon, where I have been taking part in writing poems to a “word of the day” was “wild,” my mind immediately went back to those little scenes of wildness in an otherwise planned flower experience, and the poem above is what I wrote.

And it reminded me to remember my students, too, and to celebrate the ones who think different, who diverge from the assignments, who question whatever it is that we are doing and why, who ask to change direction, who don’t ask to change direction but just go ahead, who find a thread and just pull it to watch it unwind, who would rather be a daisy among tulips than just another tulip.

Peace (planted and in bloom),
Kevin