In case you are curious, here is the archived recording of a conversation that my colleague, Gail Poulin, and I had about coding and literacy and learning over at Classroom 2.0 Live. It was a lively conversation, with lots of sharing, and connecting into the Hour of Code initiative that takes place this week as part of Computer Science Week.

Along with the media archive, there is a long list of coding resources available at the Livebinder created for the session. While Gail and I had some started links and resources, it was the sharing by everyone in the session from around the world that makes the Livebinder a keeper.

Check out the Hour of Code Livebinder. 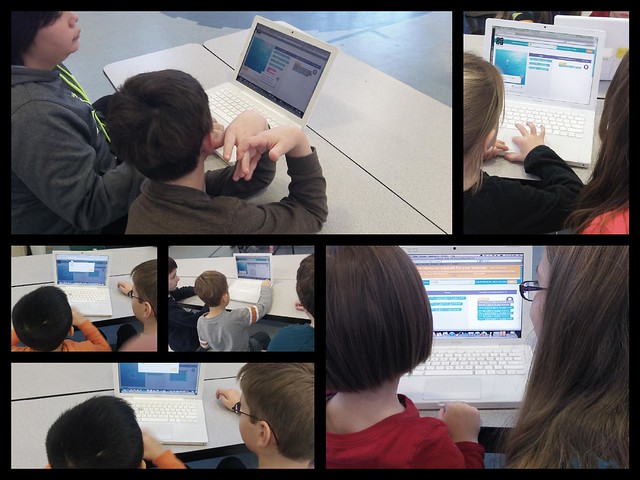 In anticipation of the Hour of Code next week, my colleague Gail Poulin and I gathered her kindergarteners and my sixth graders together for our own Morning of Coding yesterday. We teamed up our classes, and each group worked on a coding activity at Code.org based on the movie, Frozen, where the task is to create visual fractals with Blockly code. Think of it like Legos as programming. (By the way, the activities at Hour of Code work great on interactive boards for whole-class activities and there are no-tech coding games available, too).

To be frank, we were not sure how it would go, but it soon become clear that the kids are alright … they figured it out (for the most part) and spent the time fully engaged as partners in code. Most groups got through about seven or eight levels of the game, but one group – two boys – almost made it all the way to level 20.

Gail and I will be on Classroom 2.0 Live later today (noon on the East Coast of United States), chatting up the PD webinar about coding and literacy and technology and learning. Come on over, if you have time, to participate in the conversation. We’d love to see you there.

Link to join the session:
http://tinyurl.com/cr20live

Peace (under the hood),
Kevin

I have the good fortune of being asked to hang out online this Saturday afternoon for a bit with my friend and colleague, Gail Poulin, as we talk about the Hour of Code, which kicks off next week. Gail teaches Kindergarten at my school, and we are bringing out students together tomorrow to do some coding activities as collaborative.

On Saturday, as part of the Classroom 2.0 Live series, Gail and I will be in a Blackboard Collaborate session (at noon, on the East Coast), as we talk about coding and literacy, and technology integration in the classroom. And, who knows what else we might wander into … You can join us, too, in the online discussion space.

Here is information from Classroom 2.0 Live:

In preparation for next week’s Hour of Code, check out these quotes from Douglas Rushkoff’s great book, Program or Be Programmed.

The other day, I noticed something new over at the CodeAcademy site. Called CodeBits, it is series of small projects that bring to mind the work being done with the Mozilla Foundation with Thimble and other coding projects. With Codebits, you can tinker with code and create/adapt small projects. I took a postcard and revamped it (CodeAcademy calls it “forking,” which is a term used for various programming projects. I think…) for the Nerdlution effort of friends in the midst of our 50 days of some resolution, and I shared out the link on Twitter.

Check out my postcard

The screenshot above shows how the coding is laid out (again, reminds me of Mozilla’s Thimble).

Then, I saw another project that can be forked. While it’s original was a countdown to the New Year, I changed the programming so that it keeps track of the 50 days of the #nerdlution.

Check it out and again, feel free to fork it for yourself.

Peace (in the snow code),
Kevin

I tried to keep track during the week of the minutes that my sixth graders did with the Hour of Code project. Between teaching and playing with simple coding programs and sites, we also spent a good amount of time around programming with our science-based video game design project now underway.

I used Piktochart to make this Hour of Code infographic, although I have to say outright that the total minutes are collective (all students time on tasks together) and in the end, the numbers are interesting but meaningless. The real success is that I can see we sparked interest in computers and technology this week in ways that I had not been able to before, AND lots of girls as well as boys were deep into the activities.

Peace (in the numbers),
Kevin

All this week, in between our work designing science-based video games, my sixth graders have been learning about the Hour of Code initiative. Of my 80 students, only a handful have ever done any kind of programming. Most didn’t even know what programming is.We had a long discussion about what code is and why it is important to at least understand the underpinnings of technology. In kid language, I explained the importance of understanding our interactions with technology and about having some control over what we do when we use our computers, mobile devices and more. I didn’t use the word “agency,” but that is what I meant.

I am bringing them into a site called Tynker tomorrow, but yesterday, we worked on a great introductory activity located at the Hour of Code site that uses Angry Birds (familiar, annoying pop icon) to show how to use a style of Logos programming (called Blockly) to move around a maze. The site worked fantastic with our interactive board (and the video tutorials worked well), so that I did very little other than show them the code they were writing (the site reveals the programming code underneath the moves) and hand off the pen to the next student to solve the problem and level.

They got the idea of block-style programming, very quickly,  and they were very engaged in the activity, helping each other out to solve the problem of each level. By the end of the day, we had collectively written a total of about 145 lines of code and spent a collective 6,400 minutes with programming with Blockly (80 students, 20 minutes each class, four classes). I know learning is more than numbers, but it’s still pretty cool to see it that way.

Here are a few scenes from the classroom, as we worked on both the Angry Birds activity and then moved back into programming around our video games (using Gamestar Mechanic). And on to video game design … A few students asked about apps that use a style of programming language, so I created this visual to share with them about the apps I have on my iPad. My son plays some of them. I have not yet checked out the Code Academy app for teaching programming, but that is on my list. Tynker for Schools from Tynker on Vimeo.

I am going to use Tynker with my sixth grade students as part of the Hour of Code next week, just to see how they do and if any of my sixth graders get the coding bug (good bug — interest). I’ve been playing around with the site a bit, and I like it builds off the Logos Programming tool and Tynker might be a way into Scratch later on. The lesson plans built into Tynker seem have an easy entry point, too.
Here is a screenshot from a level I was playing, pretending to be a student. You can see the Lego-style programming and the hints/tutorials were in kid-friendly language. Plus, they have baked a story into the programming activity. I haven’t gotten too far but I like what I see so far. And there is a whole section where kids can make their own stories, too, with a lot of different options for characters, scenes, sound and more. It’s nicely done. We won’t get to the “create your own animation” elements next week but I suspect I might have some intrepid students who will be intrigued by the possibilities. I am thinking I might have to put some voluntary challenge out there (connected to our game design unit underway right now).

Peace (in the tinkering),
Kevin

Consider me intrigued enough to sign up. The Hour of Code project in the first week of December aims to spark interest in students and teachers in the idea of computer programming, with the aim of providing students access to code-based projects (on the computer, and off … which is a good idea). Now, I see that Gates and Zuckerberg and others are partly bankrolling this venture (and I see a whole slew of corporate partners, too), so I don’t go into this project blindly. Still, Code.org is organizing the whole thing, which puts my mind at ease a bit, since I have enjoyed their other efforts to introduce the power of writing code to more people.

The overarching message of the Hour of Code initiative is about jobs, and the future employment skills of young people. I can live with that, although my own aim when I teach simple programming is to shift my students from consumer to creator. If that opens up jobs in the future, fine. The whole reason I do a video game design project with my students is to show them what happens “under the hood” with game design. This connects to the ethos of the Make and Create. For now, what I want is empowerment for my students.

There are even a few “paper code” projects that seem interesting.

I am exploring a site to use this weekend and will report out if it seems viable. At the very least, if you sign up, you get 10 gig of storage free in Dropbox.
Peace (in the code),
Kevin