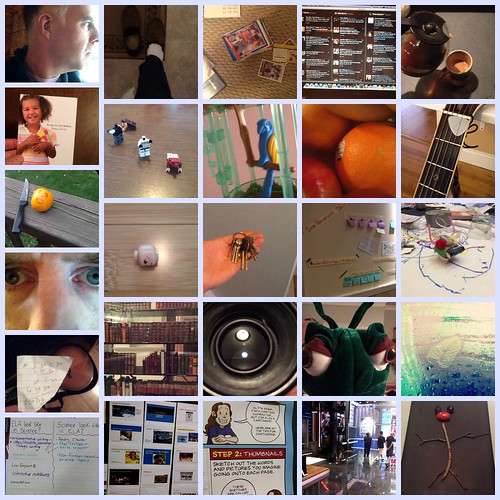 Vine, or the making of new Vines, sort of went kaput the other day, although I guess the 6-sec videos are still being hosted at the site, and there is something called Vine Camera replacing it.

But I am not sure.

All I know is, the other day I received an email from Vine, warning me that the deadline for using its downloader was upon us. So, I grabbed the ZIP file of all my Vines (videos and image shots, it turns out), and then thought .. now what?

I was curious to see the vids all together, and so pulled them into Animoto for this collection. It may only be amusing and entertaining for me, with context.

After sharing yesterday’s post about using Vine to make a multimedia poem about Vine, Terry suggested that maybe a collaboration with Vine might be something to consider. Yep. We jumped right on that, with each of us shooting our 6 second segments and then pulling them together into this video story:

Terry set up a Hackpad for us to write collaboratively. He started with the beginnings of a poem about snow, and even linked to some published poems. That would have been great, but reading Terry’s poem and thinking of the snow falling outside, I hit on the idea of a short narrative about the stories of snow. The script came together quickly (helpful, when each scene is only a line or two long at most).

Terry, in Kentucky, and me, in Massachusetts — we each took our phone or device outside for a little walk. I went as far as my backyard, and had to time my shots with the sounds of the city plowing crew. Terry has more room to roam, although you can just glimpse the cat and hear the famous rooster crowing in the soundtrack. That rooster made my day. I don’t know about Terry, but my shots went pretty smooth. A few retakes but nothing too bad. The most difficult part is that Vine requires you to hold the screen with your finger and getting yourself in a shot while doing that is tricky. Terry has a few shots where the last word gets either clipped or cut, particularly in the last shot. I suspect the six second rule was challenging for him. But he took some beautiful footage of the snow.

I suggested we use Dropbox for him to send me his files. Terry set up a shared folder and invited me in. He could have emailed them to me, too, I suppose.

Here’s where it got tricky for me. Terry’s files were in an odd format that my iPad did not want to accept as I tried to transfer the videos to my camera roll to use in the PicPlayPost app for a media collage. So, I had to get on my laptop, figure out the right file format and convert all of his files to something my iPad would like (which I first did as .mov but that didn’t work and then converted again to .mp4). I had to straighten out a few of his video files, too, which were taken with the lens on its side (although I thought about keeping them, just to add the odd effect). Then, I had to upload those back into Dropbox, then open my iPad and try again. (It worked).

Now I had all of the files — Terry’s and mine — on my iPad and in PicPlayPost, I began to discover another difficulty: the labels of the video files are not visible when importing into PicPlayPost, so you have to go through each one and figure out not just which video to import, but the sequence of the import (so that the overall collage will run in order). Terry sent me a lot of files of winter, so that took some time.

PicPlayPost allows you to publish directly to YouTube, so that was a snap. I decided to try out an alternative version with the Storehouse app, too, just so I could use more of Terry’s winter footage as buffers between the “story” we were telling. I still like the PicPlayPost better as a more seamless narrative, but Storehouse allows you to scroll through the story with a bit more agency. One drawback is the viewer has to allow the sound through, or it seems muted. Odd default setting that I can’t figure out how to change.

Peace (in the snow, with more on the way),
Kevin