Way back in June, when I first started to use the Vine app (with its six seconds of video limit) with the Making Learning Connnected MOOC, I pondered how one might conceive of it as more than a documentation of life. I wondered if there were ways to tell a story in just six seconds. I played around with Vine and created this “story” of a letter to the future. It sort of worked. I guess.

I’m still pondering Vine, it turns out, and the #walkmyworld project (of documenting our world in social media) has brought the video app back into focus because organizer Ian O’Byrne has suggested that folks use Vine as a way to do that documenting. I’ve since shared a few Vines, particularly of my house as I wander through my day. And I have kept an eye out for pieces about Vine to help me think about its possibilities. (Check out this post of Six Second Movies and there is even a Tribeca Six Second Film Fest.)

But my friend Molly Shields has been openly mulling over  how to use Vine as digital storytelling platform. Me, too. And with the expected future shift of #walkmyworld into digital poetry (in my previous post, I stumbled on the term of “video haiku” to define Vine, and I still like that way of imagining it), I had a few Twitter-based conversations with Molly about how to go about doing that.

You have to think of the limitations: six seconds does not allow for a lot of lines of poetry. The looping effect of Vine is intriguing because it brings the end of the poem right back to the start of the poem. If you don’t consider that effect, the poem could have a jarring effect — stopping suddenly and restarting.

During the afternoon, as I was at my son’s basketball game, a poem came to me. I didn’t have paper, so I had to jot it down in the back cover of the book I was reading. I tinkered with words, trying to make it fit within the limitations and trying to make it resemble a snake eating itself — an MC Escher of a poem that wraps back on itself. I didn’t have my ipad with me, so the writing was the heart of what I was doing, even as I had a mental stopwatch in my head. The people next to me probably though I was a lunatic, mouthing the words and watching my son’s game clock to keep track of seconds. (ha)

Here is the poem:

It turns out the writing was the easy part. Shooting the video was much more difficult , and I tried a few different ways to get at it until I decided on taking three angled shots, reading parts of the poem as I looked off into the distance. I’m not sure I like it, though. Not because of the way the video came out but because the visual lacks an important element: metaphor. I realize now that I should have lifted a small screen (iPod or something) in the last frames.

We write. We play. We experiment. We learn.

Peace (along the vines of creativity),
Kevin

PS — In 2012, at NCTE, I gave an Ignite Talk about short-form writing. I wonder how it might be different now with Vine and other media apps in the mix. I’m relatively new to the idea of Open Learning, where technology has opened up new and expanded spaces for people to engage in their passions without the traditional four-wall structure. (And, some critics would say, without the same rigor, too, although that would be a source of intense debate, I suspect.) To me, open learning is a way to dip into topics and communities and go as deep as you want or need or desire, with personal goals guiding you forward. This is not for everyone, obviously, and I toggle back and forth between how engaged I want to be.

The thing is, I keep meeting incredibly interesting people in Open Learning environments who stretch my thinking and push me in new directions. We need that in our lives — folks inside our learning trajectory who show us new paths to pursue and new ideas to consider and new schematics from which to observe the world.

All that is to explain that this is suddenly, for me, the reason of a bunch of projects that I am participating in. As a way to navigate my own thinking, I created this flowchart the other day. It is meant to be fun, and was as a much a scaffold for my own thinking as it is for anyone else. Seriously, if you need to use my flowchart to figure out Open Learning, you might be looking in the wrong direction. <ha>

I shared out the flowchart (which I created in Google Drive) on Twitter (my real hub of online spaces) but then, I realized if I used ThingLink, I could put in links to the communities being references. Plus, as I worked on the links, I realized I could add a bit of humor, too. (ie, the moo and the door and more). 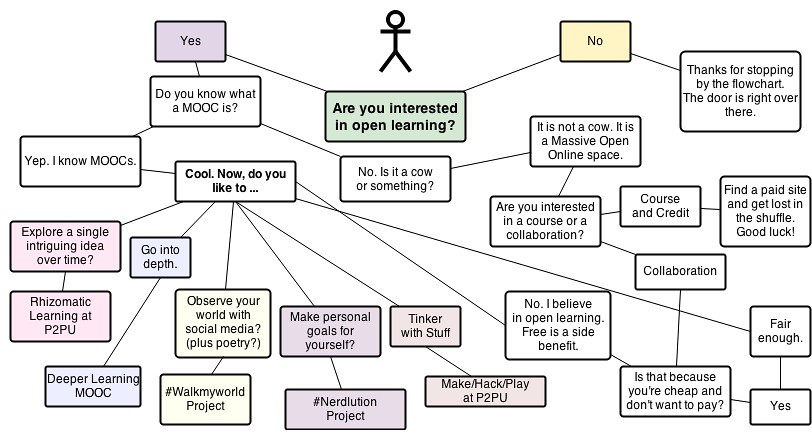 As I wrote the other day, I am curious about how to use visual infographics to tell a story. Here, as part of the #walkmyworld project, I decided to map out a typical day of mine (time spent where) and create an infographic of my day. I used an app on my iPad for the creation of it and rounded up and down a bit on the times to make them whole numbers.

I also tried to use artistic design to create the face (although I now realize the mouth is frowny because of the way the arrow points. My days are not normally frowny). The sleep element I put off to the side because it felt like that state of mind is different than the waking state of mind (and the focus was on the day). If I had more space, I might have broken down the “other” a little more in specifics.

But overall, I like how it came out, though, and the reflection points to just how much time I spend in school on a typical week day. Obviously, weekend would be different. (Maybe a different infographic). As part of the #WalkmyWorld social media experiment, I decided to visually capture my commute into school on a typical morning. I had my camera on the passenger seat and when I thought I saw something interesting out my window, I’d pull over and take a shot. Luckily, there is not much traffic on the side roads I travel. I wasn’t sure what would come of this but when I pulled the photos into this collage, I was pleasantly surprised. I see the beauty every morning — the rolling hills and tree-lined streets — but the sunlight at that time of day, during this time of year, is particularly beautiful.

Peace (during the drive),
Kevin

I’m a sucker for ideas, particularly ones that seek connections between people and their lives and technology. So consider me intrigued by a project by friends Ian o’Bryne and Greg McVerry (and a few others) called #Walkmyworld, where, as they describe it:

This is part of an ongoing, multi-year venture Ian, Greg and others have been working on, and sharing out at NCTE each year, around digital media and writing. Poetry is often at the heart of it, and Ian writes in his post that he anticipates a shift towards poetry in Walk My World at some point.

I’m still trying to think how I might get my students documenting their world, but this morning, I opened up Vine and shot this very humdrum video of what I do (after I walk the dog) — which is get my java and get writing. I wanted to keep the coffee mug front and center each time, as the frame for the video (and well, my morning).

Page 5 of 512345
Thank you for visiting this online writing home. I am a sixth grade teacher and a co-director of the Western Massachusetts Writing Project. This blog covers a lot of ground -- from teaching, to writing, to music, to art and beyond.