(Experience the immigration map created during Write Out)

The Educator Innovator website did a nice overview article recently about this past summer’s Write Out project, focusing on a few folks and giving an overview. I was one of the team of facilitators, and enjoyed the intersections of the outdoors, the historic, and writing/making/sharing/learning.

Read the article at Educator Innovator about Write Out.

#Writeout was a two-week professional development program, sponsored by the National Writing Project through a partnership with the National Park Service. The program connected educators and park rangers with place-based learning opportunities in July 2018. A team of educators from both organizations—educators who have themselves been working on collaborations in their local communities between Writing Project sites and national park sites—designed #WriteOut. Their goal was to help educators make connections between learning, writing/making, and local outdoor and historic public spaces. — Educator Innovator

Peace (in the woods and urban spaces),
Kevin 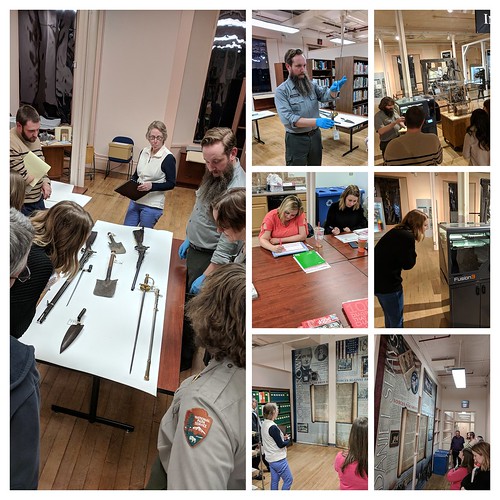 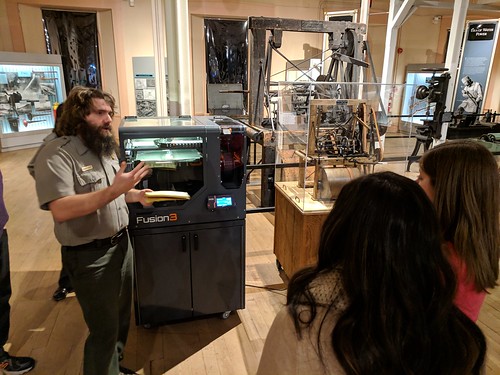 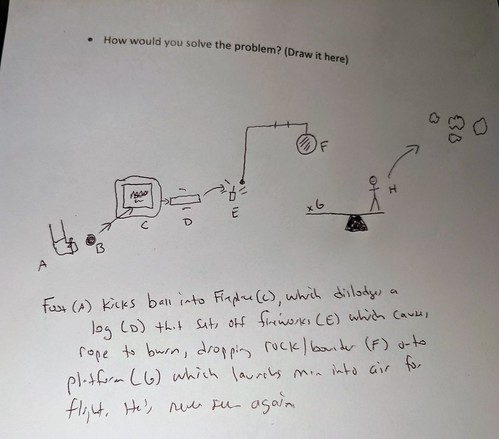 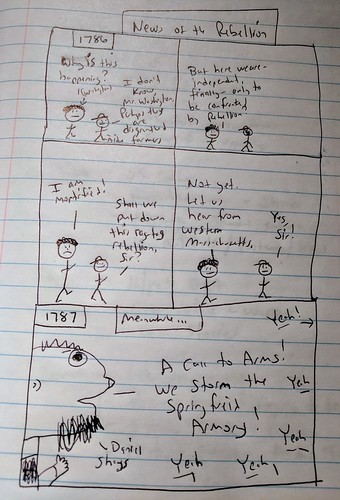 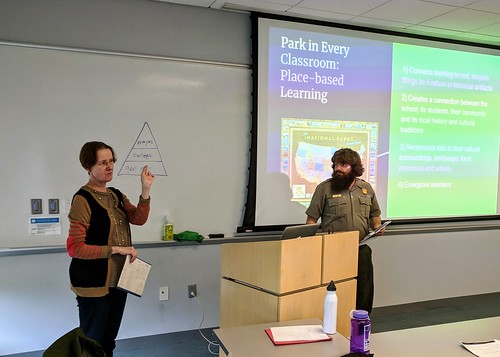 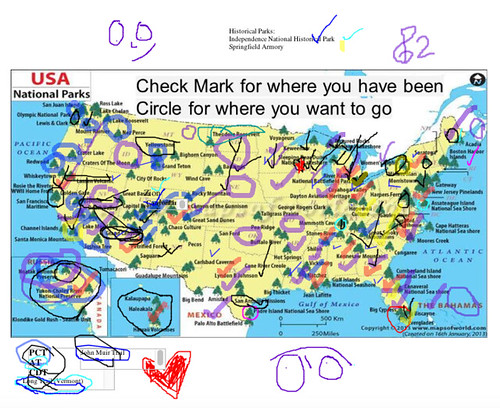 Bethany Silva and I presented an online workshop about the summer Write Out connected learning project for the virtual 4TDW (teachers teaching teachers about technology and digital writing) Conference yesterday, and we asked participants to help us both hack a map and write some poems. People dove in. 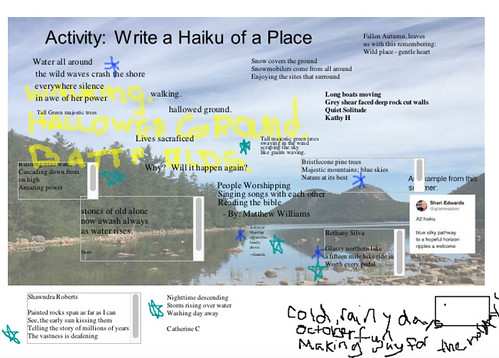 Here is a version of our presentation:

In the next two weeks, I am facilitating or co-facilitating four different workshops at three different places, and while I am making good progress, I still feel a bit scattered, thinking through all of the tasks I have to do to get it all into place. 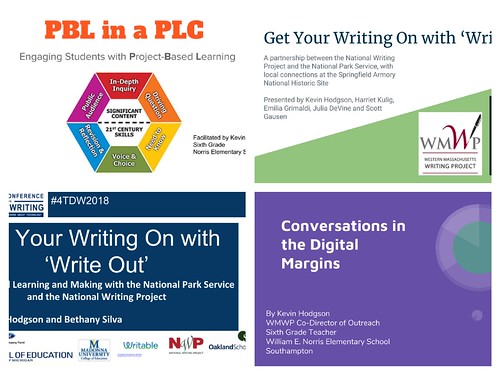 This weekend, my Write Out colleague Bethany Silva and I are doing an online presentation for the 4TDW (teachers teaching teachers about technology and digital writing), and we used Zoom this weekend to finalize most of the planning. Online presentations like this are tricky because you want to engage the audience and encourage them to visit resources, but then you need to have them all come back to the platform. The virtual conference is free, by the way, and our session on Write Out (an initiative between the National Writing Project and the National Park Service) is on Saturday, from 11:15 a.m. to 12:15 p.m.

A week from today, meanwhile, I am gathering with some grade 3-6 colleagues in our school district, as I have been asked to lead a Professional Learning Community around Project-Based Learning. I have a bunch of activities and activators all set up, but there is limited time, and we will meet only one more time this year. Yeah, not really a PLC. More like a PBL teaser, but I’ll do my best to get conversations started and underway.

Finally, two other presentations take place a week later at our Western Massachusetts Writing Project’s annual fall conference. on October 13 at UMass Amherst. There, I am doing another version of the Write Out workshop (but this time, more localized, around our work with the Springfield Armory National Historic Site) as well as a workshop about digital annotation and the Writing Our Civic Futures project from Educator Innovator. My aim is to get us annotating a text (by Linda Christensen) on paper (first, solo, and then as a workshop), then together, online, joining the crowd annotation project. 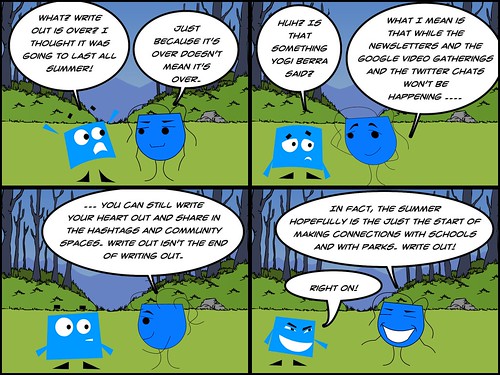 We’re wrapping up the summer portion of Write Out, after two full weeks of activity and sharing an open learning network. You can read the last newsletter — which has suggestions for video reflections via Flipgrid and a LRNG Playlist to continue the work of making connections into the school year — and the hope is that teachers find park rangers, and park rangers find teachers.

And that these partnerships help students find places beyond their schools and classrooms to become inspired to write about the world.

As the band, Semisonic, reminds us: Every new beginning starts from some other beginning’s end.

Peace (start at the end),
Kevin

This is a bit of time-warp sharing, I guess. Although the two-week Write Out project formally is coming to a close this weekend, this writing camp project at our local National Park Service site — the Springfield Armory — happened just before Write Out started. But I finally got a video together to share out as we sorted out media permissions of students. Write Out is a partnership from National Writing Project and the National Park Service to connect educators to park spaces for place-based writing activities.

Our free summer camp — Minds Made for Stories —  was aimed at middle school students from a social justice middle school in Springfield, Massachusetts. Funding for the camp came from Mass Humanities. Coordination of the camp involves the Western Massachusetts Writing Project, the Armory, the school system and the Veterans Education Project.

A component of this project is a series of Professional Development sessions that I facilitated with the Springfield teachers, who then helped run the camp. We are planning more PD at the Armory for the Fall as well, thanks to a grant from the National Writing Project.

We had nearly 20 students for a full week, at the Springfield Armory itself, exploring primary source material, using the museum itself as our “text,” welcoming visitors to the program to talk about women’s roles during WW2 and the Double V campaign for civil rights as well as a soldier’s life in the Civil War, and lots of different kinds of writing.

What kinds of writing?  Some of the activities …

The video captures some of the student explorations, and one of our final “publishing” events for the camp was the creation of a public display of student work that is now on the floor of the Springfield Armory museum, giving Armory visitors a look into some of the writing that students did this summer.

All this to say, while a lot of Write Out work took place outside, and in beautiful forests and mountains and streams, there are also plenty of urban landscapes and history-rich buildings to explore, too.

This is the third version of a poem I wrote for Write Out, using found sounds from the National Park Service sound site. The first version was a text poem, with links to sounds. The second version was a podcast, with my voice layered with the sounds. This final version is a digital poem, with image and sound and voice.

What I have been trying to get at is how to best incorporate sound with a poem. While this version is the most visually pleasing, I admit that I sort of like the podcast — the version of just voice and sound — the best, for it forces you to imagine the animals and scenery. Here, I show you the image from the sound files.

I could not attend the second Twitter Chat for Write Out last night, so this morning, I spent some time digging into the questions and the responses as part of my curation after the fact.

I loved the use of a haiku inspired by the work of others (that is so Writing Project, as Dave says in his tweet) and the sharing of explorations as well as the thinking around student writing and publication. It was nice to see some new folks in the mix and the conversation is another example of how networking builds connections. Which is a main goal of Write Out itself.

PS — I pulled out just the haiku poems

The other day, I use some found sounds from the National Park Service website to inspire a poem I called “Hiking the Wild Mind.”

But I didn’t feel satisfied with it in that version. It was text with links to the sounds. What I wanted to do was have the poems and the sounds together, as a podcast.

So this second version — an audio poem —  is all about sound — of my voice mixed with the landscape.

I’ll be doing one more variation of the poem in the next day or two.

Page 11 of 13« First‹ Previous78910111213Next ›
Thank you for visiting this online writing home. I am a sixth grade teacher and a teacher-consultant the Western Massachusetts Writing Project. This blog covers a lot of ground -- from teaching, to writing, to music, to art and beyond.