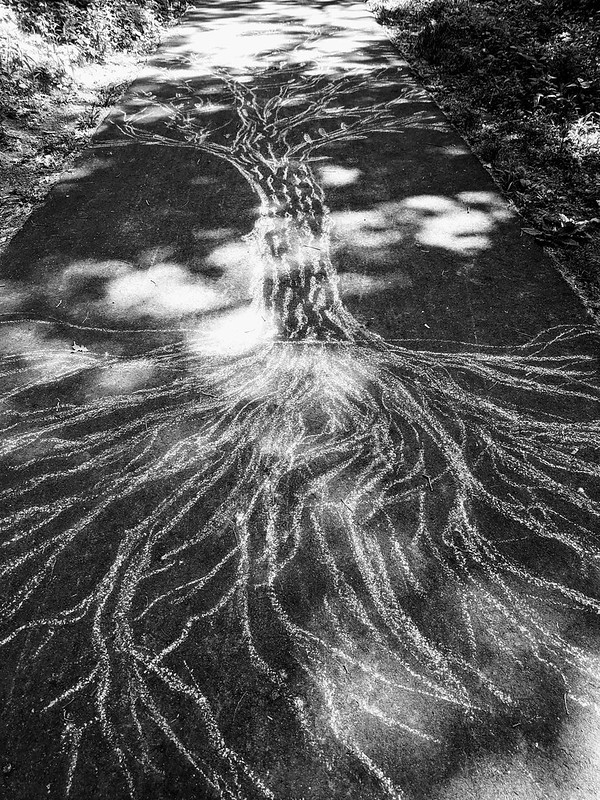 That sounds snarky and negative, so let me say upfront that I thoroughly enjoyed The One and Only Bob, except I really missed the voice of Ivan, the silverback gorilla of The One and Only Ivan, in my head. Bob, Ivan’s close dog friend, is the narrator of this sequel, which centers on a storm and tales of survival.

In the original book, inspired by a true story of a gorilla being kept cruelly captive in a shopping mall, Ivan’s voice is so unique — the use of flow, of language, of pacing, of syntax — that I can still hear Ivan when I pass the book over to students with a “must read” recommendation. Bob, on the other hand, is unique, too, in his way, but he sounds to my ears a bit too much like a person at times.

It’s not fair for me to compare Bob to Ivan, but Ivan will always be the one and the only Ivan.

Luckily, Ivan is still a big part of Bob’s life. He makes not only an appearance in The One and Only Bob, but the gorilla is crucial to the storyline at multiple junctures. Ivan’s presence is everywhere, as it should be. And Bob’s voice, too, emerges more strongly as the story moves into gear. Maybe it took me, the reader, time to get into the flow of Bob, after putting Ivan aside.

Bob’s adventures here unfold gradually, picking up a few years after the first book, and it’s a huge storm that propels Bob into bravery he didn’t know he had and on rescue missions that force him into action he’d rather avoid. We also slowly get his family backstory, a rich narrative that moves into the main plot.

I’d recommend The One and Only Bob for elementary and middle school readers, and maybe pair it up with The One and Only Ivan, too. (I guess a movie version is in the works). You can’t miss with Katherine Applegate, really. 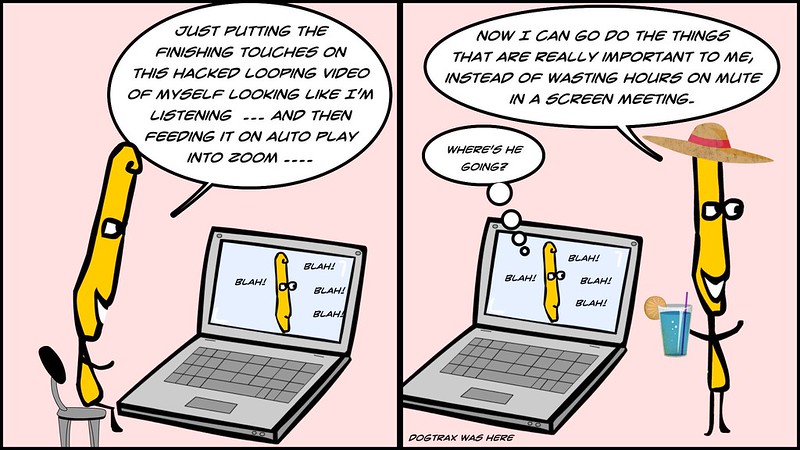 Making comics is one way I process the world. My collection of comics from the Pandemic, and teaching/learning during social distancing, is now up to 40 comics, and maybe still growing. Some are funnier and more insightful than others. With school nearly ending, I am taking a pause for now with the comic making. But I am sure I will be back …

Peace (and a smile, I hope),
Kevin 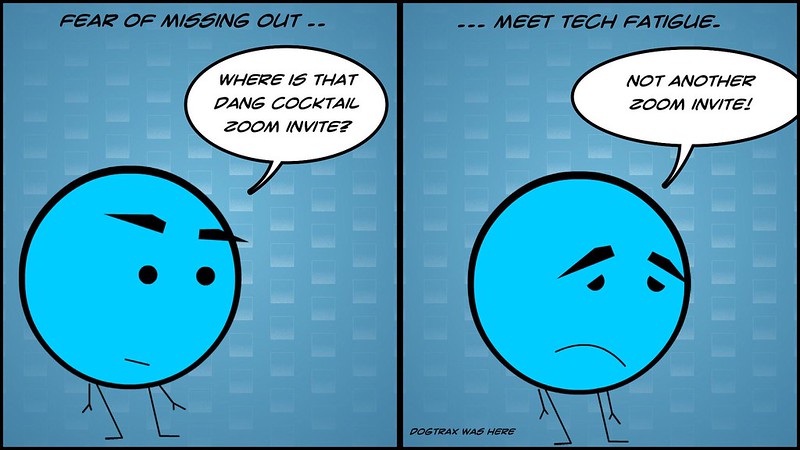 I recently took part in a three-hour professional development session in Zoom (groan, if you need to). I want to be upfront and say: I liked the presenter well enough, as they demonstrated strong knowledge and understanding of their topic, and this video session replaced an in-face session that wrapped up an interesting hybrid course on the teaching of reading that unfolded over a few months time (when we were all still in school).

It’s not the instructor’s fault they had to do this final session via Zoom. It’s the Pandemic and social distancing. They did the best they could to cover the material they needed for the job they were hired to do. I get it. It’s also possible that I went in a little weary of video conferencing, as so much time is spent doing so with students and administrators and others. That’s on me.

But … I thought afterwards of some lessons I learned by being a participant in the Zoom session as I think about being in the role of presenter in online gathering (as I am leading some work next week for colleagues.)

These are my observation notes to myself:

I’m no fan of this new push into video PD format but I understand it is our world for the foreseeable future, and so, we need to find strategies that make it work for everyone. Listening to a voice talk for long stretches never worked before and it works even less now on screens. We need to think about engagement, more than ever.

Peace (thinking on it),
Kevin

A week from today, the school year for kids will be over (we teachers will still be doing a day of PD on remote learning to get ready for what’s likely coming next year). With wrap-up events happening this week as our students transition from our elementary school to the middle school, yesterday was our last day to meet with all of our sixth grade classes in Google Meet, for one final classroom session on the small screen.

I went over different things — a few scattered assignments still out and about to complete, where to bring borrowed novels and assigned textbooks to school, our upcoming Step Up Day ceremony, etc. — but I made sure I spoke of my deep and heartfelt appreciation for the writing they have done since we left school in mid-March, and how so many of them were able to persevere through hard work, and how they remained connected to us and to each other.

I encouraged them to find books they want to read this summer, and to take their eyeballs away from the screens. I reminded them of my regular urging as their writing teacher that they keep a writer’s journal of these times, for their own sake (to look back and remember) and for future generations, too. I talked of writing poems, of making games, of imagining stories, of organizing essays. I tried to cram a year’s worth of what writing was for us into a short video chat, and it was impossible.

I hope I left them with love.

I’m nearing the end of my collection of songs written and recorded during this Distancing Time of the Pandemic entitled Notes from a Quiet Corner. This song is just acoustic guitar and voice, with little production, entitled Word Left Behind (The Wheel Won’t Spin). It will be probably the final song on the collection of songs I am curating for release on Bandcamp in the coming days.

Our school technology specialist (and all around geek) used his drone to make a short film of our elementary school — now vacant and quiet and empty — and the video he made is both intriguing for its view of the place but also sort of sad because of what it reminds us we’re missing as the school year is coming towards an ending (a week from Monday is our last day). 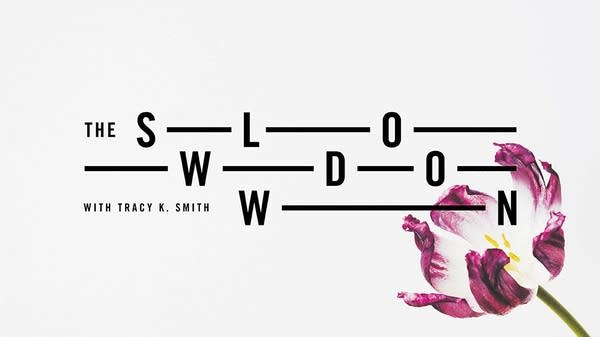 One of my morning podcasts that I always listen to is The Slowdown by former poet laureate Tracy K. Smith. She is so perceptive in her choice of poems — she rarely reads her own work, choosing instead to feature the work of others. This week, she has detoured from new editions of her podcast to surface older podcast pieces that grapple with race, identity and politics, and I’ve appreciated her voice in my ear as I do my walking and thinking on the world.

My regular morning poetry writing has been centered on the events unfolding in our country, too, although sometimes slant, as Emily Dickinson might say. I’d never suggest that a poem can change the world that way we hope — and certainly, not my poems — but poetry can provide another lens to better understand the self, the larger place we inhabit together, and the injustices, and the love.

I recommend The Slowdown podcast, that you allow a few open-minded minutes each morning with Tracy K. Smith, to let her insights and worries and words, and her voice, to sit with you a bit, and allow the poems she chooses to share to anchor, or maybe unsettle, your heart and mind as you start your day.

Maybe that is all we can ask of poems, anyway.

Here are my own poems from the last week:

no voice
is the lone
voice anymore

such streets
some cracked
some beaten
this season
we stand
for reason
we march
for right
for justice
we shine
light, revealing,
an act
of believing
in something
much better
than this

An Autumn chill
arrives on
the first of
June

Harbinger
of the beautiful
or more news
to subsume?

The world beyond,
sleeps, now
accustomed to spin,
perilously
out of tune

The danger
becomes us;
wrapped in a shell
of words we consume

Page 4 of 610‹ Previous12345678Next ›Last »
Thank you for visiting this online writing home. I am a sixth grade teacher and a teacher-consultant the Western Massachusetts Writing Project. This blog covers a lot of ground -- from teaching, to writing, to music, to art and beyond.