As I was in Chicago working on our Monograph Book Project that centers on how our Western Massachusetts Writing Project responded to change, I began to get more interested in our use of creating concept maps to chart out who our program leaders were and what they were doing, and how things were overlapping with each other. I have not made these maps — that has been the work of others — but they are interesting to think about, and have shaped our inquiry at our site over the years.

So, in true digital storytelling fashion, I created this little video:

Peace (as a concept map translated into reality)<
Kevin

This was a weekend of deep thinking here in Chicago as part of a Monograph Book Project with the National Writing Project. Yesterday, we met with some friends from Western Pennsylvania and we gave them some feedback on their draft of their book (about how a group of teachers moved their site forward through a Visioning Process), and they did the same for us and this feedback helped us immensely. But it also shifted what we had already written in a pretty significant way and so, although not much writing got done yesterday, there was a lot of discussion and remapping out our ideas.

And now we are all about to do more writing again as we use a real inquiry question focus into how our Western Massachusetts Writing Project site coped with significant change and established the groundwork for leadership transitions for the future. My task is to write about mentoring models, job descriptions and how technology helped us completely re-envision our site through the use of website design.

I just came across a mention of a site called QuickMuse, which captures poetry as it is being written by famous poets. They have 15 minutes to compose a poem based on a theme, or quote, or idea, and then QuickMuse captures the writing process, making the creation of a poem somewhat transparent.

Want to see what I mean?

Poet Robert Pinsky was given this quote:

“He was an intellectual. He used to read novels, poetry, history, stuff like that. And he could hold a conversation with almost anybody on all kinds of things…. He was real sensitive. But he had this destructive streak in him that was something else…. [H]e used to talk a lot about political shit and he loved to put a motherfucker on, play dumb to what was happening and then zap the sucker. He used to especially like to do this to white people.”

And here is the finished piece.

Very cool, although how finished the poem is is a question, and how much did the pressure of the clock play into his writing process. It would be nice to read his reflection of the experience, too (or better, hear him podcasting his experience).

Peace (inside the poem of Charlie Parker),
Kevin

I just finished up a book that I have to share with anyone who is interested in the merging worlds of novels, graphic novels, photographs and tangled (but resolved) plot lines. The book is called The Invention of Hugo Cabret by Brian Selznick.

I won’t give the story away, but it involves a young boy in Paris with a passion for clocks and mechanical objects, an automaton that can do something wonderful, a passion for the power of movies in our lives, and how fragile but powerful the connections are between people.

Here is a blurb from the introduction, just to set the stage:

“…before you turn the page, I want you to picture yourself sitting in darkness, like the beginning of a movie. On screen, the sun will soon rise, and you will find yourself zooming towards a train station in the middle of the city. You will rush through the doors into a crowded lobby. You will eventually spot a boy amid the crowd, and he will start to move through the train station. Follow him because this is Hugo Cabret. His head is full of secrets, and he’s waiting for his story to begin.” 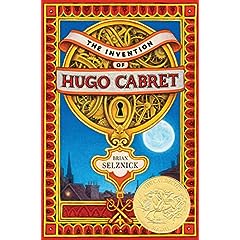 I heard about the book from somewhere in my Bloglines aggregator and ordered it from Amazon (here is the link to order), thinking it would be a slim graphic novel. So I was quite surprised to find one of the fattest books I’ve seen in some time (500-plus pages) but is a combination of various genres and I read the entire thing in two days.

Now I wish I could order a class set for my students, but we don’t have the budget for that. Sigh. And, man, I just checked out the author’s flash site — very cool.
Peace (with gears fitting together like the reels of a film),
Kevin

On Friday, I am off to Chicago for a Monograph Book Project with the National Writing Project. My colleagues, Bruce P. and Susan B., and I have been writing the story of what happened to our Western Massachusetts Writing Project when three seismic events took place:

This was all before my time at WMWP, so it has been quite a narrative journey for me to discover the history of our site. In Chicago, we will be meeting with editors and other writers from other writing projects to discuss our progress and how things are going.

Essentially, our book is built around these ideas:

Þ The creation of an inservice coordinator position to spearhead our efforts to reach into more schools by tapping into the expanding knowledge base of our teacher consultants.

Þ The addition of a technology liaison who not only helped move us forward into technology in new ways but also became part of the leadership team that allowed our site to view what we were doing, and how we could improve, through a different spectrum.

Þ A model of mentoring in which veteran leaders of site-based programs would ask for newer, less-experienced teacher consultants to become co-leaders and this not only gave us flexibility in times of unexpected crisis, but also expanded the number of leadership positions at our site.

Þ Writing out explicit job descriptions for leadership posts, from co-director to technology liaison, as a way of not only explaining the roles and responsibilities of the position, but also leaving a paper trail for the future.

Þ The recasting of our entire leadership structure to feature rotating co-director slots with three-year term limits and the launch of a task force structure that allowed more teacher consultants to get involved in the decision-making process of our site than had happened previously.

Þ Increased efforts to create partnerships with organizations outside of our traditional circle of friends that allowed us to expand our visibility and reach in a wider geographic and demographic area. These partnerships included Westfield State College, the Wisteriahurst Museum in Holyoke and the Springfield Republican newspaper.

I bought my middle son the Comic Book Creator (Marvel-edition) software package for his seventh birthday and when he wasn’t have some fun with it, I was: Peace (in a fantastical world),
Kevin

This time of year is Quidditch Season at our school. About eight years ago, a student worked with the gym teacher to devise a version of the Harry Potter magical game for our sixth graders to play. There are about five different things going on the field at the same time and the sixth graders spend an entire day (this coming Wednesday) playing the other sixth grade classes in a Quidditch Tournament that lasts the entire school day. (My classroom’s team name this year is ARCTIC FROST)

This week, I had them write poems celebrating the game or their team or some aspect of the game, and we had volunteers read their poems for a podcast.

Peace (on broomsticks, with quaffles, bludgers and snitches),
Coach Kevin

On Wednesday night, I guest-hosted Teachers Teaching Teachers on the topic of technology and storytelling. It was a bit nerve-wracking (not knowing how things were going to go and how to get everyone on) but exciting and informative and all of that good stuff.

You can listen to the show as a podcast now and check out the chat room discussion.

Thanks again to Paul and Susan for inviting me to sit in. They are wonderful hosts of that weekly show.

Peace (with a story),
Kevin

As part of a book project that I am helping to edit around how composition is changing in the classroom, a colleague passed along a new resource book called Teachingmedialiteracy.com by Richard Beach. I haven’t yet had a chance to really check it out but, being digital, I did check out his website, weblog and wiki.

I like the Wiki best of all. Beach has his students 9college, I think) contributing to the collective knowledge in such areas as:

The sites within the Wiki are well thought out, instructive and reflective, and provide a myriad of resources. This Wiki is a great site for anyone venturing into the thicket of what media literacy is all about these days and the voices of students come through with the power of the collective Wiki.

Peace (with no deceptive advertising),
Kevin

As part of a larger weblog project called Making Connections through the Western Massachusetts Writing Project, a colleague and I at my school are working with three other regional middle school classes to conduct an science experiment (Question: Which skittle will melt quicker — sour or sweet?), share data through a weblog, post a scientific abstract and then, later (and not related to Skittles), post a creative scientific journey story.

As you can imagine, there have been complications along the way. We are using Survey Monkey to collect data, and, well, one day, the settings on the survey collection were not quite right and so after all of our students put their data in, we had to wipe everything clean and start again (my fault).

But here are a few photos we are sharing that show the distribution of colors of Skittles with our students:

Peace (with sweet and sour),
Kevin