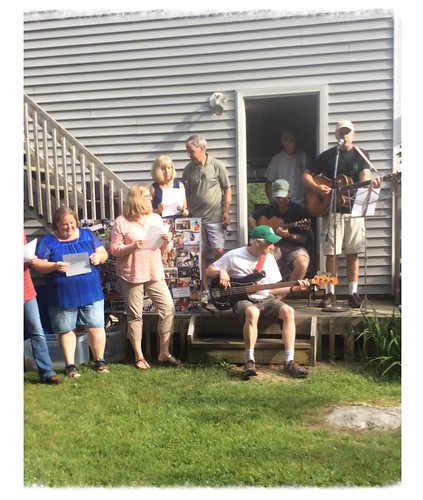 My eldest son has just graduated high school, and we threw a large party at our house the other day for the family and and friends of our family and his friends. As a surprise, I wrote a heartfelt yet slightly sarcastic song for the group of “Boys” who have known each other for many years. A group of parents (and my dad, at the last minute, got on the snare drum) came together to rehearse the song (well, we rehearsed once), and then, we performed it for them at the party.

Today’s Daily Create for DS106 was one for the audio senses. It asked us to use a Nature Soundmap project (where people post audio recordings of animals in nature) and mix five sounds together. I was tempted to add some backing drumbeat … but then found that the first track, of frogs, created its own internal rhythm.

The way it works is you can download some of the audio tracks from the map and use an audio editing system to mix them together. I used Soundtrap but Audacity or Garageband would work just fine, too.

In this track, along with the chorus of frogs, I have birds and raccoons and even the rush of bats leaving a cave. It’s a nifty meshing of natural sounds. 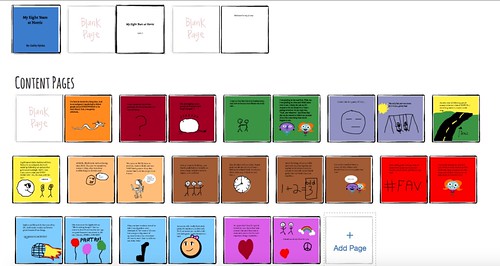 My students have been beta-testing a site that is designed to allow students to design Picture Books that lead to publishing in hard-cover format. It’s been an interesting experience, which I hope to write about down the road a bit, but last week, they finished working on their books (about their years at our elementary school as they prepare to move on to the regional middle/high school).

I took some screenshots for this video teaser ….

Peace (in the pictures in the book),
Kevin 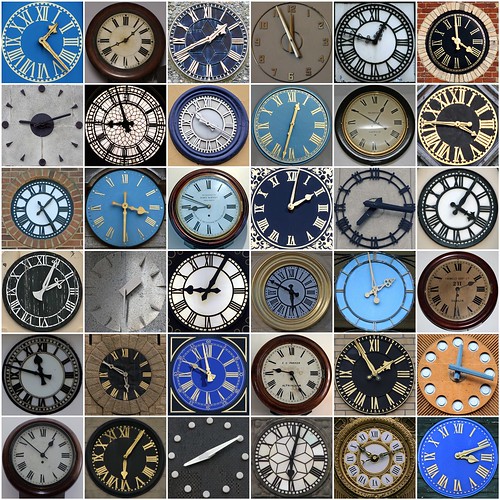 Over at my blog at Middleweb, I explore something that has been bothering me all year. We added five minutes to each of our classes for more instruction. The trade-off was losing social connection time. I’m not sure it was worth it.

Peace (every minute of every day),
Kevin

I am participating in an online course through FutureLearn about using movies as literacy moments in the classroom. It’s been interesting, but in the first week, one of the activities was about creating context for a character and then sharing a photo on a Padlet wall.

I went there, just to see what was going on. I thought my computer was melting down. The Padlet Wall is so overstuffed with posts that it is impossible to even look at. Well, unless you are intrigued by bad design, as I am. Then, you realize, this activity in a massive, online course is not the right scale for an interactive wall such as padlet.

What you get is a mess.

Now, there is a certain chaotic beauty to the wall. But discerning any one thing is now nearly impossible. I suspect that this wall was used for previous iterations of the course, too, and folks just keep on layering.

Well, Rick Riordan is at it again, taking on mythology to weave a story of action and adventure. And he succeeds again at spinning a solid story (and start to a yet another new series of books) with The Trials of Apollo: The Hidden Oracle. If the title isn’t self-evident, the god Apollo has been cast down to Earth as a mortal by Zeus, and he must earn his godhood back by performing heroic deeds.

If you like Percy Jackson and all of the other Riordan books about Greek, Roman, Egypt and Norse mythology, then you are sure to enjoy this one. I’ve had a handful of students loving the book, and as a read-aloud book with my son, I enjoyed it for what it is. I’m finding the narrative voice of his characters a little too much the same, but that’s my own critical reading, I guess.

Actually, I don’t want to review the story here. Rather, I want to note a subversive element that Riordan is working into his stories these days. Let’s note that, in my estimation, the target audience for these books is probably nine year olds to 13 year olds.

The subversive element (which perhaps is the wrong choice of words) that I am noticing began with Nico di Angelo, the son of Hades, in the Heroes of Olympus series, and continues with Apollo in this one. Riordan is making visible the gay sexuality of some of his characters, and while it did not make me or my son uncomfortable (if you knew the community we live in, you’d know why … diverse families are part of the fabric of our city), it did strike me as a daring move by Riordan, given the size of his youthful audience.

Now, let me be clear. There is nothing risque about what Riordan is doing. In fact, there is a tenderness to it. And Riordan does not make a big deal out of Nico being a gay character in this story (in an earlier book, we learn that that he had a crush on Percy Jackson). But here, Nico has a male partner (Will) in Camp Half-Blood. The two hold hands and show love openly. And Apollo, as Gods are oft to do, is clearly bisexual. He has loved and cast away female loves of the past as much as male loves of the past, and those memories haunt him.

In particular, Apollo recalls multiples times in the novel how Hyacinth was one of his “true loves.” Apollo regrets how his own jealous actions led to Hyacinth’s brutal death, and how the flowers he created from Hyacinth’s spilled blood is a reminder of that love between God and man.

Now, Riordan could have ignored this sexuality element of Apollo’s mythology, but he hasn’t. I can only imagine the discussions going on with publishers. I may be wrong. Perhaps the turning tide of acceptance makes this homosexuality element a non-discussion point.

But I doubt it.

I admire that Riordan has not flinched from that part of the mythological stories, particularly in these controversial days of awareness of gay rights and equality. Still, I can’t help but think that some parents (and maybe teachers, even), if they bother to read what their kids are reading (as many are no doubt reading Riordan on a regular basis), might feel different about the move, given the conversative political and strict religious views of parts of the country.

I remain hopeful that the storylines will spark a discussion that can lead to understanding of lifestyles. Maybe a young reader, confused about their own sexuality, will see themselves in the story and find a path forward themselves. It may take writers like Riordan to plant seeds of compassion in young readers with literature, and the flowers may yet bloom in years to come. Adults are always more difficult.

Peace (is not a myth),
Kevin

The last project of the year has been a Video Contest. This came from the students, who wanted to do something different and creative, and it has been a real interesting experience. The council put out the call for short videos to our entire PreK-Grade 6 school (about 500 students) in four categories (documentary, comedy, music and “freestyle”), and they wondered if they would be barraged by cell phone videos.

Not quite (which sort of surprised me for I, too, wondered how a small group would handle the load of video submissions, and I even began a back-up plan of inviting more students into the Student Council to help.) We only had a handful of videos, but it was enough for the Student Council to award prizes (gift cards to a bookstore) to winners in each category, and to recognize some honorable mentions, too.

The above video is a small compilation of clips from the winning videos, which ranged from a Lego stopmotion movie to a music video about a sandwich to a movie teaser featuring a strange raccoon to a digital story capturing the small town in which the school is located.

The 2016 Norris Tiger VideoRama was a success (and we will be sharing the winning videos over our close-circuit television system next week), even if I wonder how we could get even more students to be making videos in the future. (For my sixth grade students, I just never found time to do a lesson on using iMovie, which I now regret.)

Peace (and pass the popcorn),
Kevin