My good friend, Michelle King, introduced this concept of “scenius” (from music producer Brian Eno) to a three day gathering of educators, park rangers and environmental educational partners that I was part of. We were all on Zoom, alas, but the facilitators were thoughtful in the ways they used the chat as a generative channel for feedback, support and questions to be generated throughout small group presentations and discussions. The chatter flowed.

When someone mentioned how powerful that chat-side sharing was, Michelle (who was joining in as a featured guest poet/educator/creativity instigator) shared Eno’s term of Scenius to mean that a collective working together within a common theme or “scene” has an elevated power to it. Genius might refer to a single person; Scenius refers to many people, together, in a single “scene” with shared passions.

It’s a term that has surfaced through others, too, such as Austin Kleone, who has done a deep dive into the idea. In an interview, Eno explained that he realized that what he had learned in art school about individual genius working solo was more likely the result of the cultural scene that created the possibility for an artist to flourish. It didn’t likely happen in isolation.

What really happened was that there was sometimes very fertile scenes involving lots and lots of people – some of them artists, some of them collectors, some of them curators, thinkers, theorists, people who were fashionable and knew what the hip things were – all sorts of people who created a kind of ecology of talent. And out of that ecology arose some wonderful work. — Brian Eno

I am thinking how this concept connects to Connected Learning and Affinity Groups and other concepts in which the larger energy of creativity sparks individuals to raise their game, take a chance, and find others for collaboration. For me, I think of CLMOOC, and DS106, and the National Writing Project, and the organization that was hosting the gathering, Parks in Every Classroom.

Also, of course, I wonder how this conceptual understanding of how we learn within given cultural moments might translate into how educators approach learners in schools. 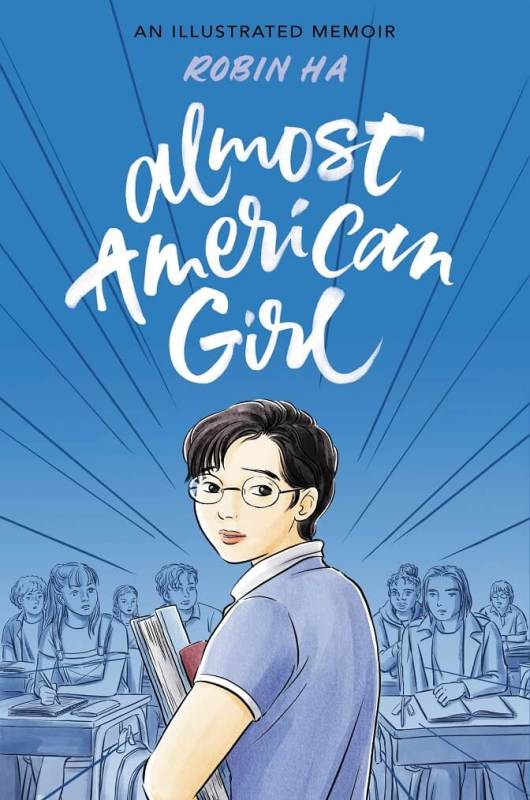 The hurricane on Sunday and into Monday was not as bad as it could have been here, but we still had strong winds and lots of rain.  The river down the street is raging. And, alas, a tree fell from a neighbor’s yard smack dab into our yard, right over our fence line. 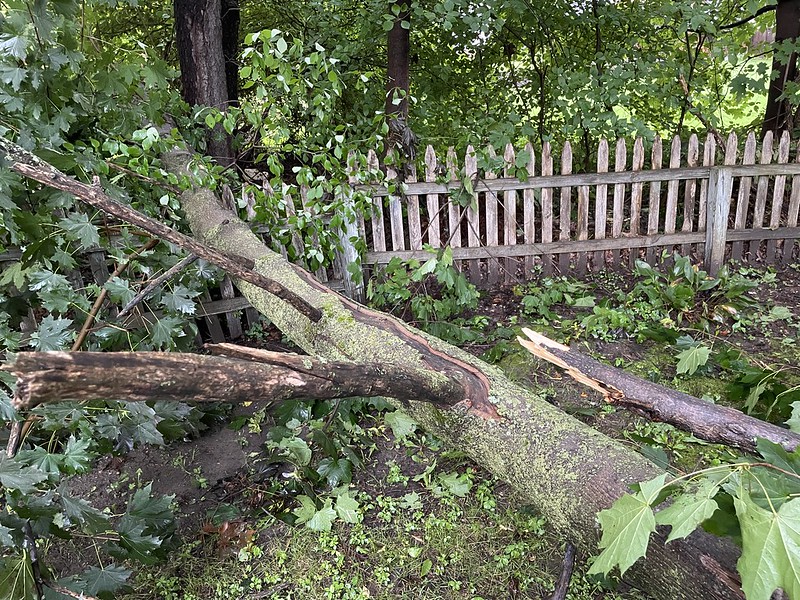 I know this happens. It’s nature. It’s part of life. It was a storm. It could have been a lot worse.

We’re lucky it didn’t hit the house and we’re lucky that I moved a glass-top table we usually have near that part of the yard for outdoor gatherings. No one was hurt. It’s still frustrating because it was a lovely tree, providing some nice shade on summer days, and now I am calling around, trying to find a tree service who can help remove it.

I guess if we learned one thing last year, it is to go with the flow, adjust as needed, and keep things moving forward. I’ll be on the phone today again, with tree companies, and chatting with my neighbor about her lost tree and my damaged fence. 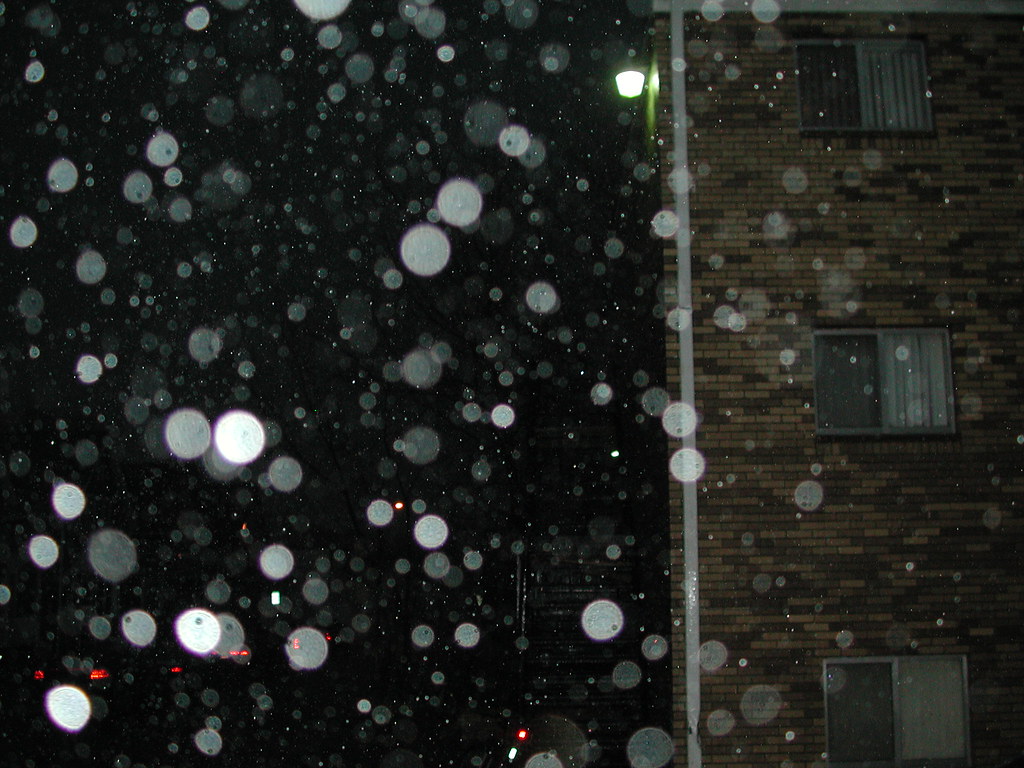 “rain drops” by Rex Roof is licensed under CC BY 2.0

We wander the remains
of the day’s fallen rains,
dancing our way
to each singing drain:
the weather, as rhythmic beat

Peace (after the storms),
Kevin 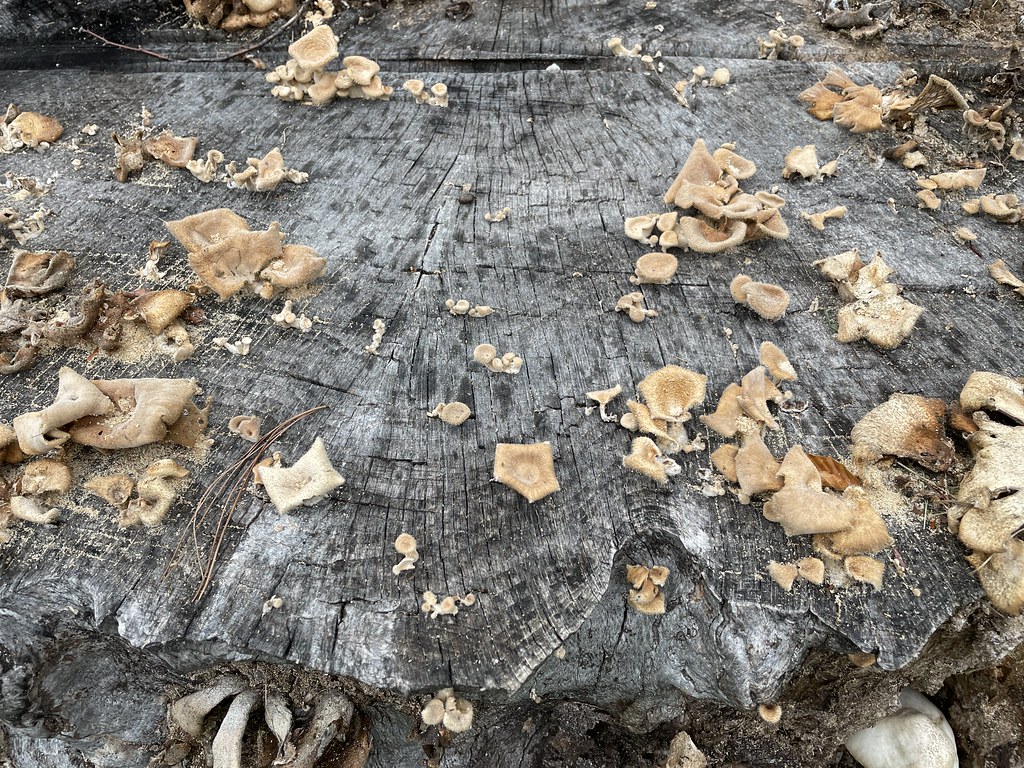 Peace (growing on us),
Kevin 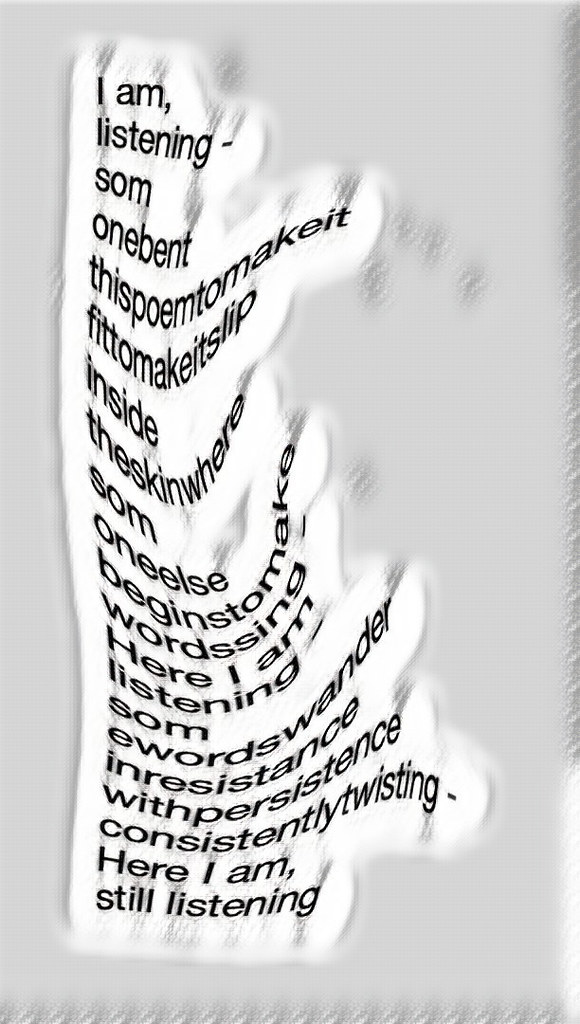 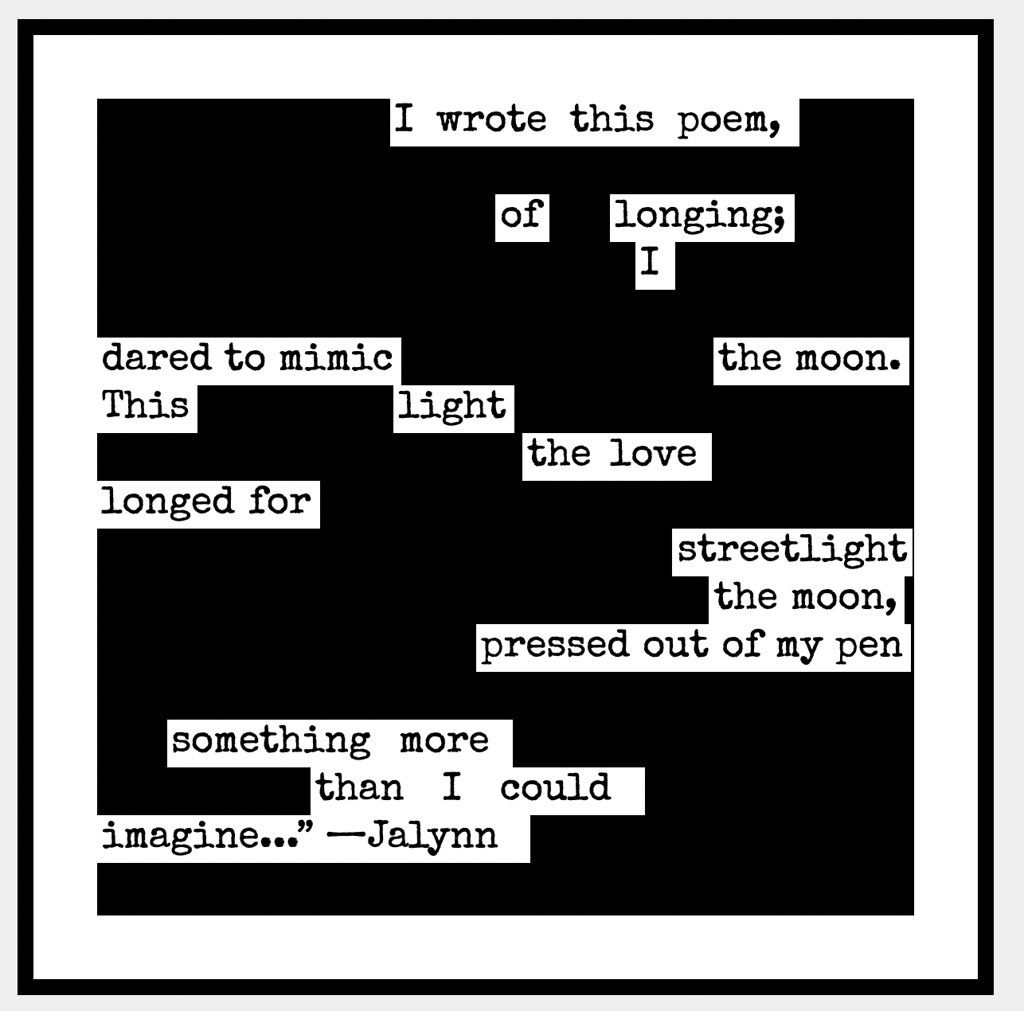 I had seen Wink, by Rob Harrell, in a few lists of “best of” book lists from last year and finally got a chance to read it during our class Independent Reading time at the end of the year, and I admit: I really enjoyed it.

Harrell, a comic strip/graphic novelists, uses his own childhood story of a rare eye cancer to inject his main middle-school-student character, Ross, with authenticity, as Ross goes through the same ordeal. The book is prose but has lots of funny doodles and a running Ross-created comic called BatPig that is hilarious and insightful, capturing the anxiety of Ross as he goes through treatment.

Stories of young people and cancer are, of course, serious business, and can often get stuck under a dark narrative cloud. There are dramatic moments here, as Ross struggles with difficult questions of why this cancer happening to him, of how his friends are either coming in close or drifting apart, and how it is affecting his family. His mother died earlier of cancer, too, and his father, during one of the more powerful scenes, tells Ross how he, the father, barely held it together after she died.

Ross is also the victim of some cruel social media posts by classmates, as he and his cancer is turned into memes that spread like wildfire and make him feel powerless. Only his best friend, Abby, holds him together until a dramatic confrontation with the meme-generating students during a lunch.

And then there’s the rock and roll. Ross decided he wants to learn to play guitar, which leads to a Talent Show, in which all of Ross’ anger and frustration at the world is let loose in an amped-up punk rock performance with Abby and another friend that startles everyone in the audience (he even destroys an old guitar on the stage in class Hendrix fashion). In music, Ross finds release.

This book is appropriate for upper elementary and middle school students, for sure.

Summer ain’t over yet but it’s getting there … so I am trying to quiet my mind a bit before the frantic start of a new school year, using my daily morning poetry to notice moments. It’s sort of like some zen incantation, how writing words as poems of moments of stillness gives the head a chance to pause.

The dragonfly
alights to the edge
of the boat,
lands and waits,
as I draw in paddles
to let us float,
its wings a-hover,
a stillness moment
of quiet wonder

They climb the tree
that is a castle
that becomes a cloud
that moves a mountain
that starts a story
that becomes a poem
that looks its way out
on the wider world
where we are only wandering by,
watching

In the aftermath
of the receding,
with the world
painted in brushes
of broken limbs
and damaged parts,
the evening sky
casts us a glow
in pink, amber, blue –
an act of forgiving
while still giving
the storm its due

Peace (sharing it with you),
Kevin 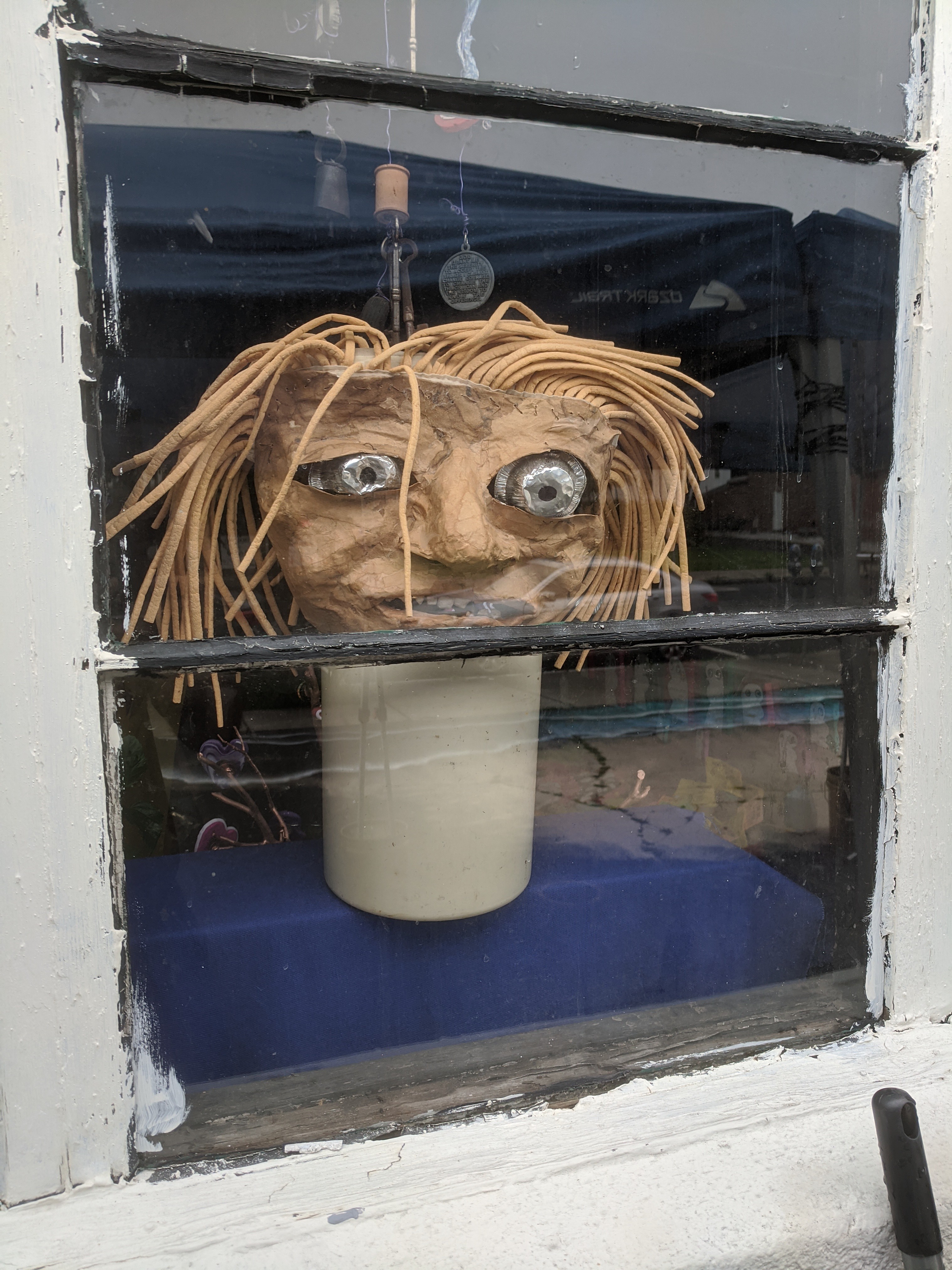 Peace (from the window seat),
Kevin

Page 3 of 638‹ Previous1234567Next ›Last »
Thank you for visiting this online writing home. I am a sixth grade teacher and a teacher-consultant the Western Massachusetts Writing Project. This blog covers a lot of ground -- from teaching, to writing, to music, to art and beyond.