Tomorrow, I am bringing my little guy to a benefit show that features the wonderful and talented Mo Willems. I just realized this week that Willems now lives in my small city (along with a host of other illustrators, writers and artists) and he is donating his time, and  few of his animated shorts, to this event to raise money to revamp the children’s wing of the city library.

Willems has created the Pigeon books, which will bring the giggles to just about any little kid (or big kid with little kid still inside)  and the Knuffle Bunny picture books, and more. He has a great sense of humor and his off-kilter stories hit you in the heart as well as the head. They are simple, but great.

As it turns out, I am reading a book by Willems called You Can Never Find a Rickshaw When It Monsoons, which is a day-by-day travel journal from when Willems spent a year in Europe and Asia, traveling mostly on foot and without much money. He drew a comic each day, and years later, he he wrote a short narrative. The comic journal is hilarious, and insightful about an American in different cultures. 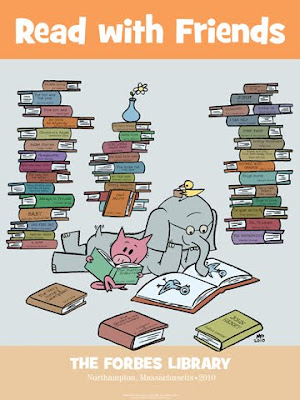