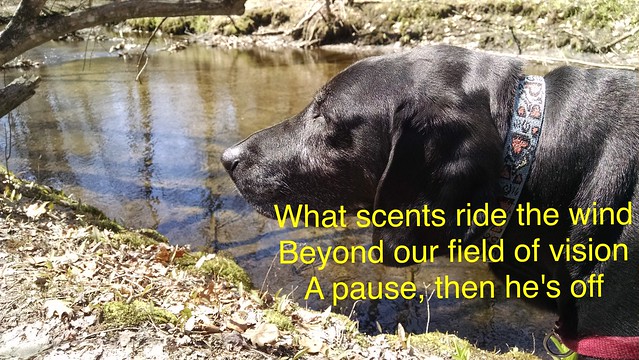 Process Note: This is a shot of Duke, our dog, when I was out hiking in the woods with four 11 year old boys. He runs ahead, comes back to me, stops, and then runs again. His nose is always in the wind. I am always amazed when I read the science behind dogs’ sense of smell and how intricate it is. 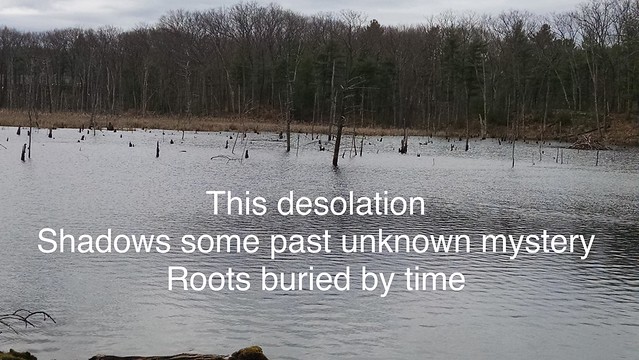 Process Note: This is from the same baseball park as the other day’s image haiku, but looking from another direction. We marveled at this scene, wondering if this was caused by manmade flooding or not. So many trees, only half in the water. It didn’t seem natural.

Peace (in the lake),
Kevin 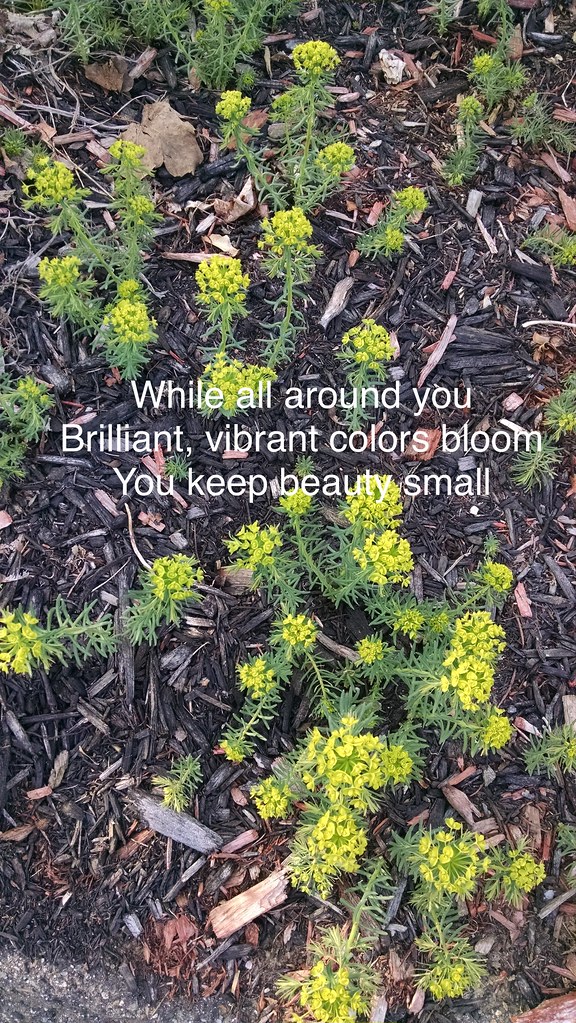 Process Note: I saw these ground flowers tucked under a bunch of tulips and others, and thought, they deserve a poem and the spotlight, too. 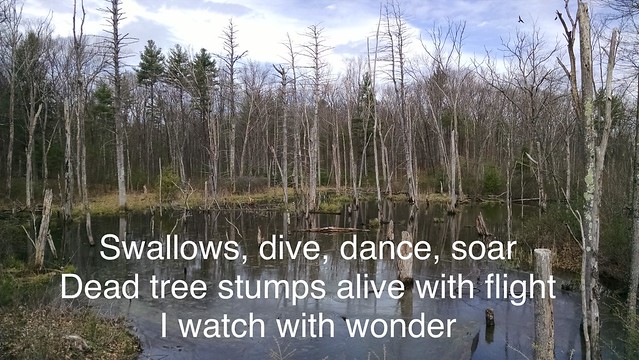 Process Note: I was at my son’s baseball game and noticed this swampy area. A bridge over a bend in the pond caught my attention, and this swamp was filled with diving birds. Swallows, I was told, and watching them dance was very entertaining.

Peace (in the swamp),
Kevin 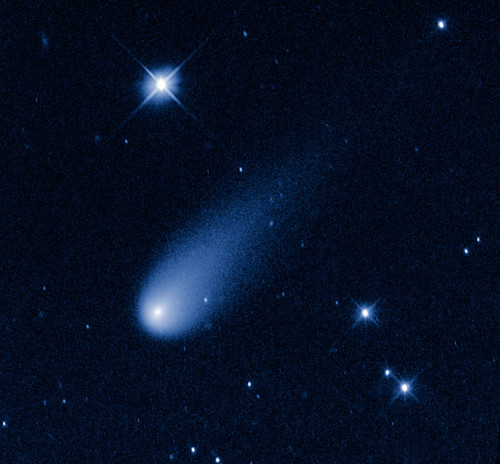 My youngest son’s elementary school hosts an annual Science Fair. It’s a voluntary thing, with showcases during the day for students and at night for parents. My son, who has done entries in the past but only half-heartedly, wasn’t all that interested this year, even though it is his last year at his elementary school.

“What about designing and showcasing a video game that other kids can play during the fair?”  I asked. “With a science element?”

That got his attention, and we chatted about getting him back into Gamestar Mechanic to design a game that he could put on display, for kids to play. I reminded him that it would have to connect with science, and he brainstormed the idea of the Solar System.

His game is called Planetary Leap, and involves the “story frame” of an explorer going to check out Pluto but who has crash-landed on Neptune, and now needs to find portals to come back home to Earth. He’s sprinkling researched information about some of the planets within the story itself.

So far, so good. I am acting as technical director only, and a bit of an editor on the writing. He’s in a bit of a crunch because Friday is the Science Fair, and we sort of waited until the last minute to get on board (due to hemming and hawing). Just like a game designer with deadlines looming, right?

Meanwhile, he is interesting in building his video game even further after the Science Fair for the National STEM Video Game Challenge, which runs through August. That sort of motivating factor is interesting to see and witness, and I am enjoying watching him as a fifth grade video game designer coming into his own.

PS — this is my site for video game design in the classroom. Steal and use whatever might be helpful. 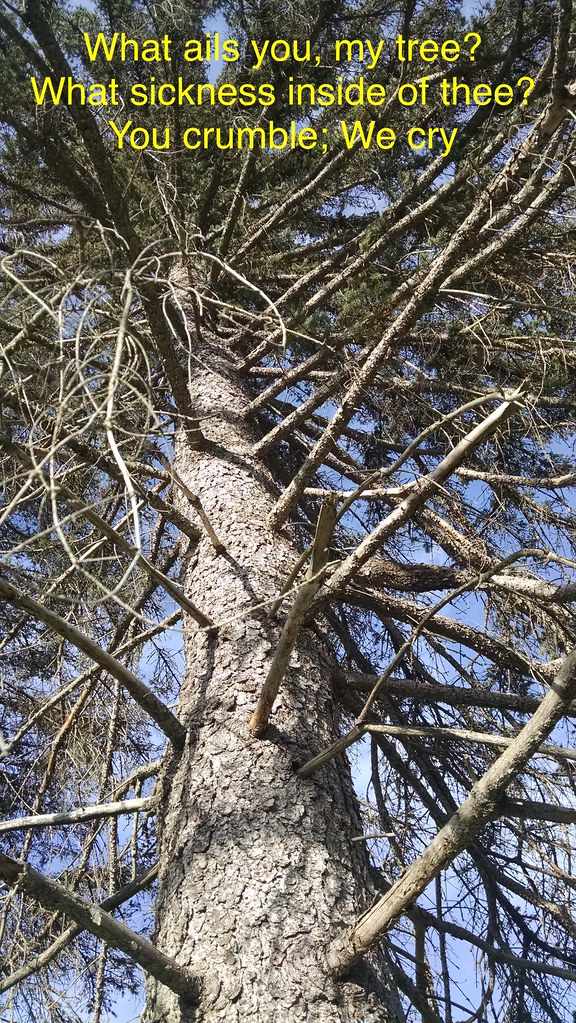 Process Note: Two pine trees in our side yard are succumbing to a fungus in the Northeast. All around, you see shadowy pines, with grey needles instead of vibrant green growth. An arborist told us the trees will slowly die, as they have been, over time. We still rely on their shade in summer, and they are still alive enough for us to not remove them.

All last week, the DS106 Daily Create community was alive with Shakespeare, as part of the 400th year celebration of the Bard. To say we took it seriously would be an overstatement. But still … each day, we were given words and/or images and/or passages and set free to do what we would. (Thanks to Sandy Brown Jensen for all the inspiring prompts).

Here are some of mine from the week: 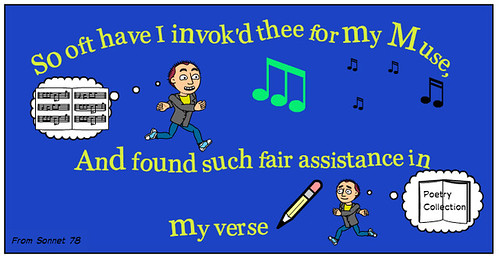 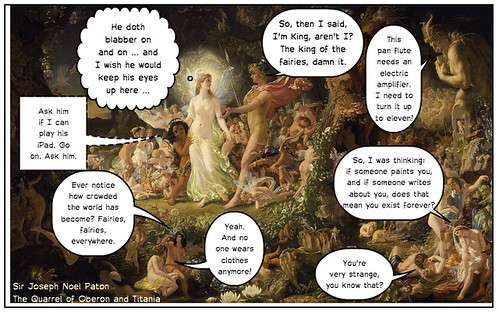 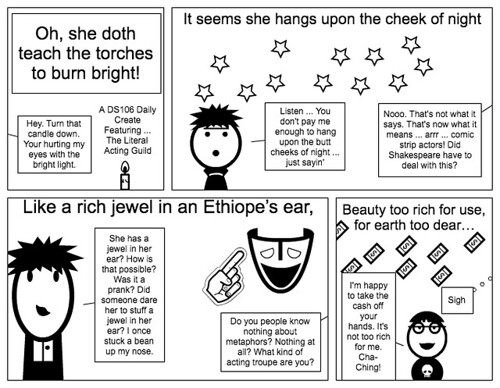 Peace (and all that),
Kevin 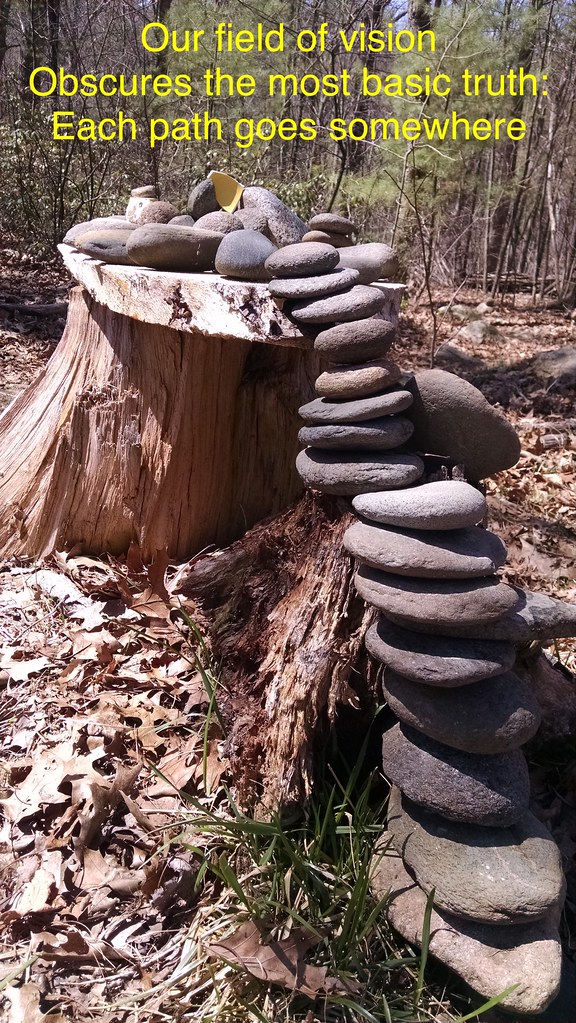 Process Note: I shared this image a few weeks ago as part of the CLMOOC Silent Sundays. It’s from the woods near my house, where lots of people use natural objects to make public sculptures. I took this photo by getting close to the ground, giving a bit of a perspective shift. The poem reflects this idea of a metaphorical ladder, leading into something. 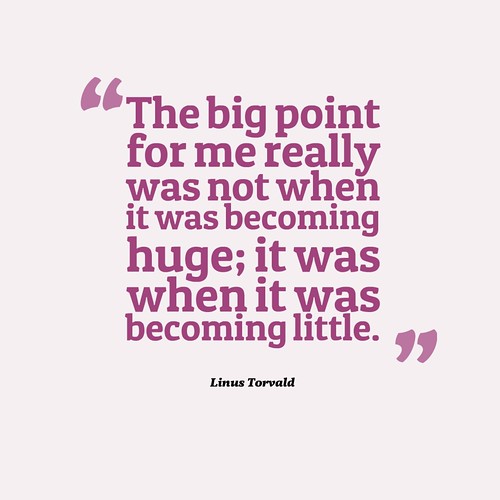 Those of us who have been part of the Making Learning Connected MOOC for the past three summers (and beyond) have been fortunate indeed. The National Writing Project not only conceived and launched the CLMOOC with help of a grant program through the MacArthur Foundation; NWP also funded the work behind the scenes, from stipends for facilitators (I was one) to the technological infrastructure. We all knew the NWP funding would not last, and so it has come to be, it seems. It’s OK, too. NWP and Educator Innovator have a whole lot of cool projects underway for the summer of 2016, including Letters to the President.

But the CLMOOC is not one of them.

While the support of NWP and all of the folks there over the three years has been critical — with extra huge props to Christina Cantrill and Paul Oh and other key current and former NWP players for making it happen — what if we, the denizens of the CLMOOC, took over CLMOOC and made it happen ourselves? NWP has done its part – seeding an idea. Now it’s our turn to nurture the seed. The coming summer, and the status of CLMOOC, was the center of an informal hangout discussion I was having with Joe Dillon and Terry Elliott the other morning as we bounced around how we might get the CLMOOC up and running for Year Four on our own, with little or no NWP support. Isn’t that the real dream of the connectivist MOOC ideal? That the people in the learning will run the show and not just participate in what the Oz the Great and Powerful behind the screen says should happen. Granted, turning the keys over to all of us (or in this case, sneaking in through the window at midnight to host a party in the CLMOOC house) potentially makes things messy, and a bit complicated. But it’s our house, after all. We all built it.

And you know what? It doesn’t have to be Massive, as in Massive Open Online Collaboration. Maybe the M in MOOC can also mean “Minimal,” as Linus Torvald’s quote above (shared by Terry in a blog post) notes. What happens when connections get stronger because they are tighter and smaller as opposed to disparate because they are larger? What if we invite the inversion of scale?

Don’t get me wrong. Being part of activities with lots of people has its appeal. You get a sense of the nodes of the world. You feel less isolated in your interests. You feel part of a movement, or something. It’s all part of the Connected Learning theory that the CLMOOC is built upon. However, you can also get lost in the shuffle when the scale is large and massive. Your voice gets lost at times. But if “Small is the New Large” (that might be a cool meme activity, right?), we might all benefit from tighter connections. We might be more apt to ask more questions of each other or to dig into inquiry together. We might come to know each other a bit better. Our learning would be more than a summer project. It would be part of our professional life.

The somewhat dehumanizing effect of a massive network might be balanced out by the stronger connections among us. We might be “people in a community” as opposed to “nodes in the network.”

So, we’re going to try to plant some seeds this spring for an “unofficial” CLMOOC summer, and we hope you might come along with us. We have no idea how it will go. You can help make it happen, if you want. Peace (and beyond),
Kevin

PS — Thank you, NWP, for setting this all in motion to begin with!

I’ve been tinkering with Blackout Poems the last few days, using a New York Times interactive site. But I wanted to try my hand at the other way — of blacking out text and leaving a poem standing. I decided to use my iPad and the Aviary app to color out lines. The text is from the book I reviewed this week: Gratitude by Oliver Sacks. 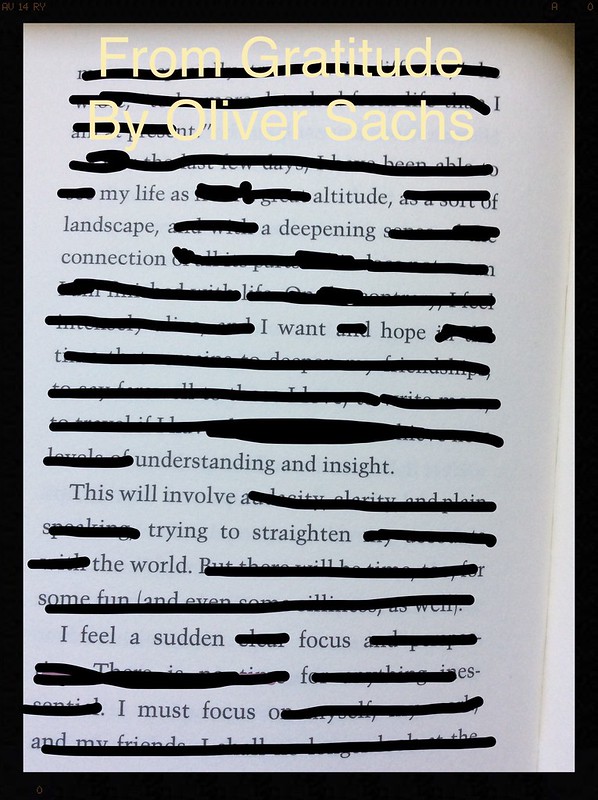