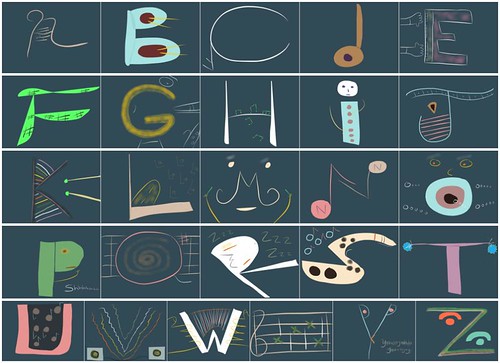 I’m not sure I knew what I was getting into when I saw some artistic friends doing an activity called Illuminated Alphabet in early April — where many people were doing daily “letters” on a theme through art (I found out later that it was part of some contest) — and decided to give it a try.

Mostly, I jumped in out of curiosity, using the theme of music, and then kept going, and at some point, I was too far along with the letters not to keep going. And some CLMOOC friends — like Algot and Ron and others — were in the mix at times, too. So, there’s that kind of collaborative inspiration.

Some days were definitely challenging to keep the theme of music flowing into letters (and some letters require a leap of faith that they somehow directly connect to music .. so, you know, trust me on my thinking on those ones). But, I had fun with making the simply-designed art (I used the Paper App to make mine, often working rather quickly once I had an idea) and seeing them all in a single collage is pretty cool.

Also, during the month, keeping an eye on the IlluminatedAlphabet hashtag on Twitter was one of the neatest things I did as the flow of letters and art was just magical and inspirational, and the mix of amateur artists (me) and professional artists made for some intriguing artwork and letters.

Peace (go on and play it),
Kevin